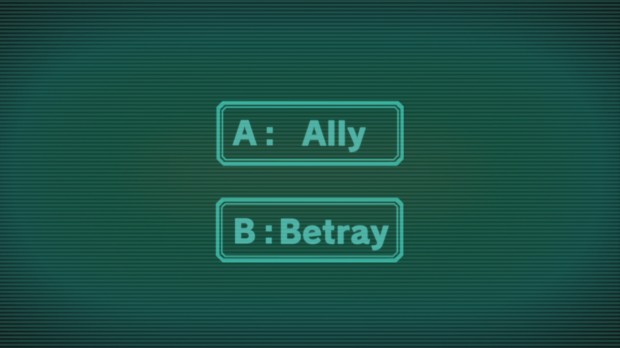 Moral choices: so common in real life, so frequently deployed as a game mechanic, and so frequently botched in their execution. We’ve come so far in a short time with gaming being able to tell stories and evoke emotions in the player – but forcing a real and meaningful choice seems impossible.

I think it’s caused by the nature of the medium. We are conditioned to stockpile extra lives, to save frequently, to reload our game if we get a bad break. It’s hard to force a meaningful choice – or at the very least, one with permanence – when the world you are making that choice in is so temporary. And so the choices get watered down (Bioshock‘s “Harvest or Save” mechanic) or don’t really matter (Mass Effect 3’s ending) or come so close to the end of the game they don’t cause much divergence at all (the big decision in Grand Theft Auto IV).

So when I started playing Zero Escape: Virtue’s Last Reward, I wasn’t quite ready for what would unfold in front of me. VLR is a visual novel game, a genre relatively popular in Japan but rarely seeing the light of day in the US. It’s the sequel to the very well regarded 999: Nine Hours, Nine Persons, Nine Doors, which I hadn’t played but had been told was excellent.

Some spoilers are going to follow because part of what I love about the game is intrinsic to the plot:

The game focuses on the running of “the nonary game”, somewhat reminiscent of what you might see in a knockoff of the Saw movies. 9 people are trapped in a strange facility; they are forced to explore it in groups (which are basically a series of Escape The Room puzzles). On occasion, the teams get sent into isolation rooms to vote whether to trust or screw over their partner(s)[1. If this sounds a lot like the Prisoner’s Dilemma, rest assured the game is not trying to hide that. In fact, it provides you a full logical dissertation on how it works and all the strategies that one might implement.]. Points are gained and lost based on those votes; anyone who reaches 9 points can leave the facility, but once the door out closes, it will never open again. And if your points hit 0? That friendly bracelet injects you with drugs and you die.

From the get go, VLR makes what seems like some odd design decisions. It puts the story tree front and center on the menu screen, telegraphing when the choices that matter (largely those votes) are approaching. You can jump around the story tree whenever you see fit. So it seemed straightforward for me to grind through it: play to the bottom of one decision tree, jump myself back to the last decision point, go the other way, and gradually see all the endings.

I barreled down the right-hand side of the tree in a couple of hours, but something odd happened. I neared the bottom, but the game hit a cliffhanger and I was sent back to the tree. Confused why I couldn’t proceed, I went to the previous choice and went the other way – and got completely mind-fucked when a character was confused why I hadn’t made the other choice. The one I had made minutes prior. (And that still didn’t help me get past the roadblock.)

Virtue’s Last Reward is a brilliant game because the temporary nature of your choices is not merely a gameplay mechanic, but also integral to the plot. The game doesn’t just allow you to you skip around the story tree, it demands it if you’re going to see the complete ending. You will repeat events under multiple circumstances, and the information from one distant timeline may help you get past challenges in another. (Of course, your ability to know about things that haven’t happened becomes concerning to the other characters, who all have their own motivations and backstories.)

Working up and down the story tree is time consuming, although a brilliant “skip dialog I’ve already heard” button saved me from deja vu. But I started from a state of knowing nothing, absorbed the world across multiple timelines, and then suddenly understood why I needed to understand all those timelines. Kotaro Uchikoshi’s script twists and turns in ways I’ve never seen a game manage before.

The biggest compliment I can give Virtue’s Last Reward: its unique storytelling and construction hooked me so hard, I ended up with a platinum trophy on PSN for it. (And I can’t wait for the next game.)

Virtue’s Last Reward is available for the 3DS and Vita. My experiences were with the Vita version. 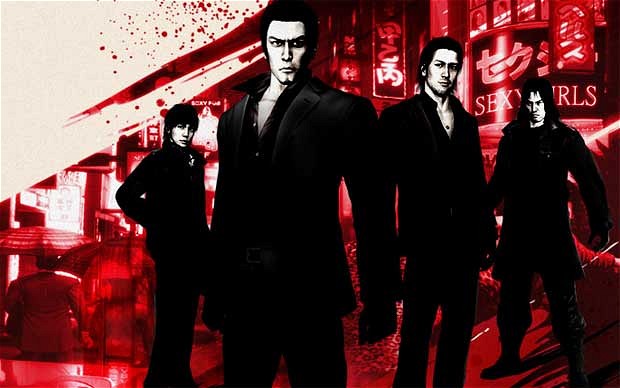 I broke out of an island prison for a crime I both did and did not commit, only to wash up ashore at the door of an orphanage run by a retired yakuza chairman.

I honed my fighting style on the roof of a building with a crazed military vet, who shot at me with a machine gun loaded with blanks.

I cared for two kittens that some homeless guys had found, which eventually lead me to find riches in a locker in an underground mall, left to take care of the cats after their caretaker passed away.

I played crane games to win prizes for my girlfriends, warbled karaoke, swung for the fences in batting cages, and played a *lot* of pachinko.

I loaned money to people in need, but rather than charge them interest, I made them demonstrate they were good people. And if they weren’t, I made them pay.

I served as a bodyguard, a bouncer, a hostess club promoter, a fill-in for a triple date, and a crime fighting sidekick.

I uncovered a massive web of deceit, brought down corrupt cops, cleared my name, and avenged the deaths of countless friends and family members.

There are plenty of great story driven games in the world, but I can’t think of many that can claim the depth of story, experience, and emotion that Yakuza 4 can.

The plot rotates between four characters – eccentric loan shark Shun Akiyama, gruff convict Taiga Saejima, dirty cop Masayoshi Tanimura, and long standing series hero Kazuma Kiryu. Their plot lines overlap and eventually converge in the final chapter, but for much of the game you’ll just be focused on their own particular domains and relationships across the sprawling city that is Kamurocho.

Let me not underplay the Yakuza world: after four main games and three spinoffs, the [character list](http://en.wikipedia.org/wiki/Characters_of_the_Yakuza_series) is simply massive. The game world is so rich, the game offers players a “Reminisce Mode”, with ten-minute videos that encapsulate the previous games. Spending thirty minutes catching up isn’t necessary, but it certainly helps fill in the gaps.

The series is also notorious for the side activities, both in the form of side missions and just places of business you can frequent. After Yakuza 3 was released in the US with significant missing content, Yakuza 4 was released pretty much complete, and it contains an overwhelming assortment of things to do. The variety of side activities is so great, the main plot often faded into the background for me. Who cares that I can go confront the men who trashed my club? I’d rather help this woman who thinks I’m her fiancee.

Perhaps it comes without surprise that some of the joy of this game gave me came out of my desire to get back to Japan. The city of Kamurocho is somewhat accurately modeled on Shinjuku’s red light district, and feels authentic. The main streets feel busy and vibrant, while the back alleys and underground concourses can have tiny tucked away bars with a few people in them. It’s not without some gaming-induced liberties – there’s almost always someone trying to pick a fight with you – but it operates much you like would expect a real city to.

In that way, it felt like a real solution to my gripes about Saints Row: The Third yesterday. The Yakuza series comes across as unconcerned in appealing to the chaos and carnage crowd. (The breadth of the dialog might cause someone with ADD to give up before the game even starts.) Instead, it is a smart, neatly packaged, intoxicating world, ready to reward those who have the patience and discipline to help right the wrongs that occur there.

Yakuza 4 is available for the PS3.

I would not have been able to survive in Tokyo without the following:

smart.fm – recommended to me a day or two into the trip by longtime friend Andy Livy, smart.fm provides learning goals for most languages and topics through a mostly flash-based learning management system. Lots of social networking integration and good tools means this helped me get the syllabary comprehension a little better very quickly. Wish I had known about this before I left.

Citibank ATMs – while I am not a Citibank customer, they are notable because (a) their Tokyo ATMs are open 24/7, unlike many others and (b) they take American ATM cards, unlike nearly every other ATM around Tokyo. Even our hotel ATM wouldn’t take our card. Find a nearby location, because you may need it in a pinch. While lots of places in Japan take cards, many still don’t. Cash remains king.

Suica – the contactless smart card used by JR Railways (and vending machines and lots of convenience stores), Suica made it painless to ride JR’s trains around everywhere. Foreigners can get a Suica/NEX package deal that represents substantial savings. Look for the blue signage near most train turnstiles – English screens are available if you press the “ENGLISH” button in the top right.

Airport Limousine – the last thing you may want to do when you arrive late at night is try to navigate the train system. Airport Limousine is more than likely going to be able to take you directly to your hotel, for about the same cost as a one-way NEX ticket. Ticket counters are on the first floor of Narita Airport and hard to miss.

Skype – so long as you have a good internet connection available to you, Skype remains the best way to deal with international calling. A number of calls home ended up costing us about $1.50. Load up before you go.

Friends – a thousand thank yous to John Scanlan, Richard Whittaker, Richard Bannister, Andy Livy, Ryan Bayne, and anyone else who sent recommendations and cultural advice my way over the last two weeks.