We had held today as a final wrap-up day, mostly with the intention to clean up things we had missed, not found, or otherwise not gotten around to. This may be less interesting than the other days – my apologies.
After the Fukubukuro madness, we took a short ride up to Harajuku to grab a few additional gifts for people. Because of the proximity to the Meiji shrine, the area was flooded with people – as we would learn, Saturday foot traffic practically everywhere in Tokyo is about five times the volume of what we experienced mid-week.
We then returned to Shibuya once more to hit the Tower Records (or, as our bank transactions romanized it, “Towa Reko”). With the death of large-scale music shops in NYC – HMV closed around 2003, Tower in 2007, and Virgin Megastore in 2009 – I found it thrilling that Tower and HMV are not only alive, but thriving. More functional than any Tower I had ever been in previously, the store featured lots of listening stations, plenty of recommendations, and well defined floors. (Entertainment, unfortunately, is one place where the Japanese costs far outpace ones in the US – most Japanese CDs float between $20-30, tax inclusive. Games and movies run a similar premium. Strangely, American CDs tend to be about $15-20, even after tax.)
As far as pickups: the new Fantastic Plastic Machine album, “FPM”, just came out a week prior and was a no-brainer. Katie managed to find House☆Disney, a remix album by Japanese house artists. She also picked up the heavily advertised flumpool album.
After some more flitting around in Shibuya – visiting the Seibu and Oioijam department stores – we headed to the station to grab the train to the Imperial Palace. January 2nd is one of two days of the year (the other being in mid-December, for the Emperor’s birthday) that the inner gardens are open to the public. That was the intent, anyhow – due to an unspecified “accident”, train service would be suspended for about 45 minutes. 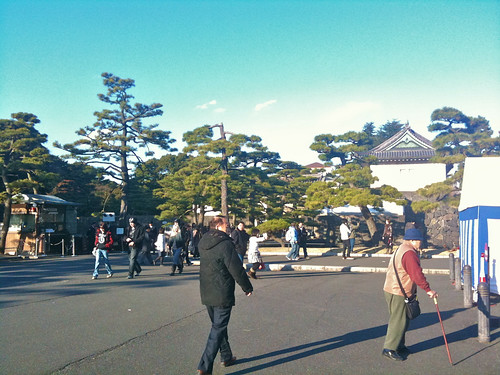 By the time we made it to the Imperial Palace, the large crowds coming back didn’t give me a lot of hope – and sure enough, people were being turned away at the entrance. 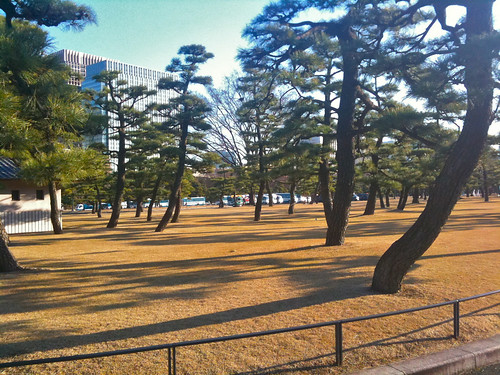 Still, the parts of the grounds that are open to the public at all times are impressive and otherwise pleasant.
We then returned to Tokyo Station with the intent of finding me my bowl of ramen. But after searching around, we opted instead for Suginoko, an Udon noodle place (ironically, right next door to Katsugen from two days prior). I am not heartbroken over missing out on the ramen – the bowl of hot udon in a pork curry broth was fantastic. The Udon was served with a side of tempura fried mass of onions – not unlike an onion ring loaf, but about a thousand times better.

While venturing around the station, Katie got pulled into a mochi kneading demonstration. The crowd was very excited to see her whack the mochi with the mallet, and afterwords we were given some of the fresh mochi with sweet red bean paste. Delicious.
By this point, we had been out and active for nearly 12 hours, so we cut short the evening plans, but not before taking the train to Hamamatsucho for… 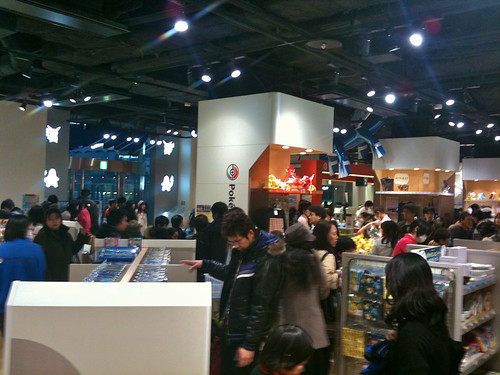 Yes, the Pokemon Center. Watching Katie’s eyes light up as she slid through the crowded store, grabbing nearly every Pichu-related item she could find was quite a sight. I opted for a shirt from the upscale/designer line, Pokemon151.
For the last time, we returned to Shinagawa – I managed to make it out of the turnstile with exactly 40 yen remaining on my Suica card – and returned to the hotel to begin trying to figure out how we’re going to pack all this stuff in our two suitcases.