On January 2nd, as most stores re-open after New Years Day, they put out fukubukuro – mystery bags filled with whatever inventory they feel like, usually at a steep discount. All the major department stores seem to do these, as do many electronics stores and clothing shops.
While the Apple Stores around Tokyo were participating, I just missed the cutoff at the Shibuya store at around 6:30 this morning. *C’est la vie.* 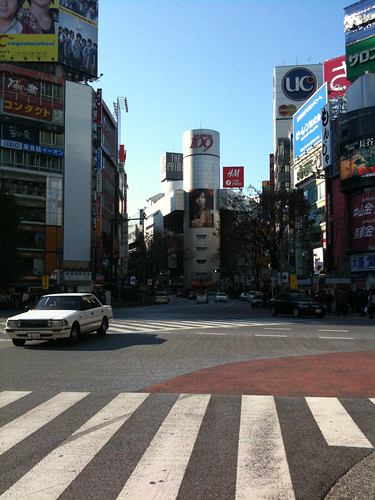 Shibuya happens to also be home to Shibuya109, a large tower of fashion shops. It was clear almost immediately that girls were flocking here from around the area in the hopes of grabbing as many bags as they could carry. Every time the walk signal would light for the crosswalk, another swarm of Japanese girls would run across the street to get the best position in line.

Here is one such crossing:

That’s a security guard on a bullhorn you hear in the background; there were at least five of them posted around the exterior of the building to ensure that the girls ran the corridors in the most appropriate manner. Inside, I could hear girls posted outside of each shop shouting on their own bullhorns, trying to convince the horde to come to their store and run away with a bag. 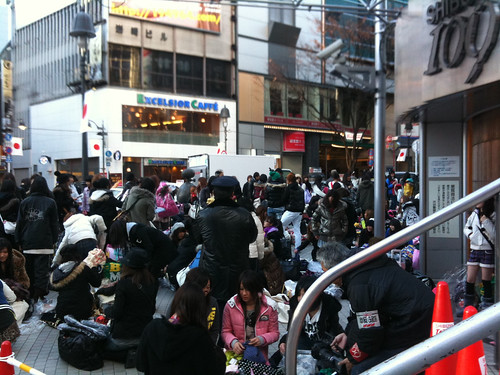 As the girls start to emerge with the bags, many of them plop down in designated protected space, open their bags, review what they got and potentially offer items for trade. Various handbags, accessories, jackets and shirts were constantly thrust in the air and swapped. A block away, a van sat with a small posse of shoppers who seemed to have scored about 12 bags from the same store, undoubtedly destined for eBay.

All told, it is loud, frantic, and a sight to behold, with nothing comparable in the US. (Save maybe Black Friday, but I don’t think people get trampled for Fukubukuro.)