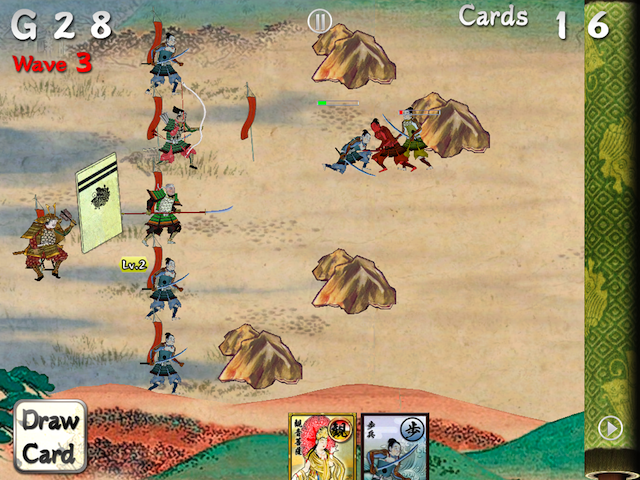 It goes without saying that the gaming world has an prominent uncreative streak. The last thirty years have been full of cheap knock-offs and riffs on wildly successful games.

The recent rise of mobile gaming has been particularly bad for this. Any game mechanic with even mild originality will inevitably be copied into oblivion. Look at what happened to Fruit Ninja, Tiny Wings, or Angry Birds.

Knock offs that intend to deceive the consumer is bad business. Derivatives that build on top of existing ideals can end up being brilliant.

Strangely, the success of Popcap’s Plants vs. Zombies in 2009 did not give rise to a wide array of grid-based base defense titles. So when Sega released SAMURAI BLOODSHOW for iOS earlier this year, there was some shouting that it seemed familiar. But it is far more than just a knock off – in fact, it’s easily a deeper title than PvZ was.

Taking place in feudal Japan and featuring lots of Edo-period style art, Samurai Bloodshow invites players to fend off waves of attackers from crossing their back line. The grid system and need to pair up units in rows to effectively defend against different units will be old hat to PvZ pros.

Everywhere that felt like PvZ lost a step, Samurai Bloodshow goes the right way. Be it build out strategy (card collection and deck building force you to adapt), unit management (life bars and being able to stack units to increase their level), or resource management (finite deck size prevents infinite builds), Samurai Bloodshow feels more mature strategy game across the board.

Bloodshow also attacks one of my personal weak spots by awarding measured specific benefits as you work through the stages. Every defeated level either sends another card into your library or increases your deck size. This slow trickle keeps you wanting to progress, as you’re only as good as your deck is.

Many gamers find derivative games to be anathema, as though every game of merit has to be completely original and devoid of connections to past titles. This is silly, of course. Good ideas can — and should — be taken and refined into greater ones. Samurai Bloodshow makes a strong case for the power of refining an existing concept into a better one.

SAMURAI BLOODSHOW is available for iOS as a Universal application.

I think T-Mobile is having an identity crisis when trying to market the Sidekick. There’s three main market groups that the Sidekick appeals to – geeks, gossip girls, and hip-hoppers. Geeks get stuff like the SSH app and the new spreadsheet app. Gossip girls get the Juicy Couture Sidekick and the like. The hip hop fans get a lot of ringtones.

But sometimes the marketing gets way too ambitious.

Over the last few days, a port of the 1982 Sega arcade game [PENGO](http://www.klov.com/game_detail.php?letter=P&game_id=8989) has appeared in the Sidekick App Catalog. The description is drop dead funny, and it reads as follows (boldface is mine):

> Fujin brings you PENGO; Sega Mobile’s sharp-dressed penguin. The arcade hit from 1982 returns from the deep freeze. This is the **most accurate penguin simulator** Sega has ever produced. Variable difficulty settings let you sling ice at your own pace. Pengo was leading the good life, **just cold chillin’** in his red tux. That is, until the Sno-bees appeared. These **haters** are **out to front** on Pengo’s **lavish lifestyle**, and **that just won’t fly with this bird**. Now Pengo’s got to **defend his crib** by squashing the Sno-bees with blocks of ice on each level. And then there’s another kind of ice on the board — the diamond blocks, which add some **serious bling-bling** to your score when lined up. And speaking of score, Pengo saves your top score, so you can **show your crew** just what you’re worth. For old-school gaming on your new-school Sidekick, go with the king — Pengo.

Wow, who knew Pengo was such a pimp? Also, the “most accurate penguin simulator” line cracks me up way too much.

PREVIOUSLY: Losing All Hope Is Freedom