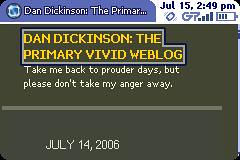 For those of you that were holding off on buying a Sidekick 3 until the Terminal Client was ported – I’m happy to report that v3.0 is now in the Catalog.

New features (as best I can tell – don’t shoot me if these were in 2.0!) include being able to change between sessions using the shoulder buttons, and ANSI color support.

Around the turn of the century, consumerism took an interesting turn: cultism became favorable. No longer was there just the mass market and a void, but small niche markets became common, sought after, marketed at. (No blog post along these lines would be complete without shouting “LONG TAIL!” at the top of the author’s lungs, and I will not break the trend.) I belong to a number of shopping cults: my memberships in [the cult of Apple](http://www.flickr.com/photos/remydwd/19415606/) and [the cult of Bemani](http://www.flickr.com/photos/remydwd/1573382/) are well documented.

Today, I realized that I had a third major cult membership: the cult of the Sidekick.

Don’t get me wrong – I was fully willing to admit my Sidekick addiction for the two and a half years I’ve owned one. It is nearly inseparable from my hand to the point where it often feels like a body part rather than a cell phone. It is difficult for me to survive without one: it manages all of my email, the majority of my IM conversations, serves as my primary syndicated feed reader, and acts as my notepad for random nuggets of information.

But this morning, I stood in line with what I would estimate as roughly 500 people on 41st and Madison, waiting patiently for our chance to purchase a Sidekick 3. Again: these were not giveaways, these were people waiting in line to *buy a cell phone*. Again: **cult**.

With that said: while there are a number of professional reviews available about the Sidekick 3, very few go into the technical aspects and random questions that tech wonks like myself have. This post is my best attempt to answer the questions I had before I got my hands on one. I hope you find this useful.