Via Metafilter, the best worst (or maybe the worst best) thing you’ll see today: the ad for Microsoft’s Songsmith.

I wouldn’t have thought Microsoft would ever top the Springsteen-esqe Vista SP1 video, but they’ve done it.

My life has always been one of jewel cases, DVD boxes, and shrink wrap. Multiple generations of gamers have inadvertently mastered obscure arts such as “removing adhesive security tags”, “shredding shrink wrap”, and “raising the CaseLogic stock price”.

Physical media has remained the primary distribution method for video games since the inception of home consoles. But with the current slew of platforms, digital distribution is finally not merely a possibility but a reality. The channels come in many forms: from the [Xbox Live Arcade](http://www.xbox.com/en-US/games/livearcadexbox360/) and the [Playstation Store](http://www.us.playstation.com/PS3/Store), to Nintendo’s [Virtual Console](http://www.nintendo.com/wii/virtualconsole) and recently launched [WiiWare](http://www.nintendo.com/wii/wiiware), to the hugely popular [Steam](http://steampowered.com) platform run by Valve for Windows.

A lot of gamers still love having discs for a variety of reasons. But there’s a growing movement of gamers and publishers pressing towards digital distribution. Gamers gain quicker access to games, less fiddling with discs, and the ability to reinstall their purchases at a later point. Publishers can create smaller, more innovative titles that wouldn’t survive at retail, keep a smaller budget, and not worry about fighting for shelf space in a brick-and-mortar store.

Or so we all thought.

END_OF_DOCUMENT_TOKEN_TO_BE_REPLACED 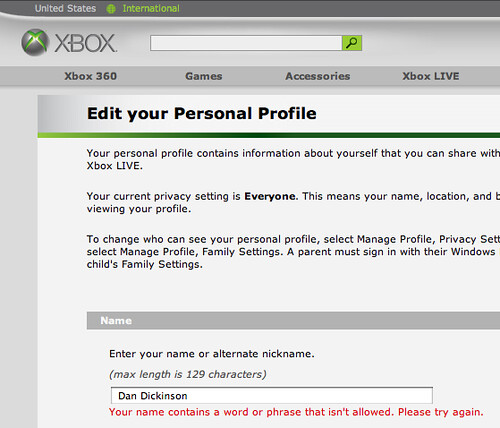 To be fair, my name is only inappropriate when I want to show it to other 360 owners – it’s completely allowable when I want to give Microsoft money for, say, my Xbox Live Gold yearly fee, or to buy points.