My life has always been one of jewel cases, DVD boxes, and shrink wrap. Multiple generations of gamers have inadvertently mastered obscure arts such as “removing adhesive security tags”, “shredding shrink wrap”, and “raising the CaseLogic stock price”.

Physical media has remained the primary distribution method for video games since the inception of home consoles. But with the current slew of platforms, digital distribution is finally not merely a possibility but a reality. The channels come in many forms: from the [Xbox Live Arcade](http://www.xbox.com/en-US/games/livearcadexbox360/) and the [Playstation Store](http://www.us.playstation.com/PS3/Store), to Nintendo’s [Virtual Console](http://www.nintendo.com/wii/virtualconsole) and recently launched [WiiWare](http://www.nintendo.com/wii/wiiware), to the hugely popular [Steam](http://steampowered.com) platform run by Valve for Windows.

A lot of gamers still love having discs for a variety of reasons. But there’s a growing movement of gamers and publishers pressing towards digital distribution. Gamers gain quicker access to games, less fiddling with discs, and the ability to reinstall their purchases at a later point. Publishers can create smaller, more innovative titles that wouldn’t survive at retail, keep a smaller budget, and not worry about fighting for shelf space in a brick-and-mortar store.

Or so we all thought.

Today, in [an interview with Next Generation](http://next-gen.biz/index.php?option=com_content&task=view&id=10620&Itemid=2), Xbox Live General Manager Marc Whitten let loose that this no longer holds true for Xbox 360 owners: Microsoft intends on delisting games that “underperform”.

> In addition to allowing these bigger and better games we will be delisting older underperforming titles in order to keep the service focused on a section of high quality games.

What defines an “underperforming” game?

> “The way it will work is that the title will need to be at least 6 months old and have a Metacritic score below 65 and a conversion rate below 6% on the service. This way titles are not just considered if they are not selling well or not getting good reviews, but actually a combination of both. We will also give a three-month notice before delisting any title.”

The method may be sound, but the reasoning is not. But before the logical attack – *statistics!*

I’ve spent a few hours parsing [the Metacritic data](http://www.metacritic.com/games/xbox360/scores/) in Excel to the best of my ability. It is the only one of the three metrics through which the public can determine which titles are possible underperformers. Sales data (particularly the conversion rate) is not released by Microsoft. And while a number of 2008 games are not yet six months old, time is marching on and all games will inevitably be six months old at some point.

55 XBLA titles are rated at a Metacritic score below 65, so were they all not hitting the needed conversion rate, the number of XBLA titles would drop from 128 to 73, a 43% reduction in titles.

Aren’t they all poorly done remakes of classic titles, though? As it turns out, no. The XBLA catalog features 55 remakes, about 43% of the XBLA offerings. 30 of them fall on the list of titles in danger of being delisted, meaning it’s nearly an even split of original titles to remakes. Should all these titles be delisted, the number of remakes on XBLA would drop to 25 out of 73 titles, reducing the percentage to 34%. I would consider this a small adjustment, but not a significant one.

The other interesting metric is to examine what categories and genres the games are broken into. 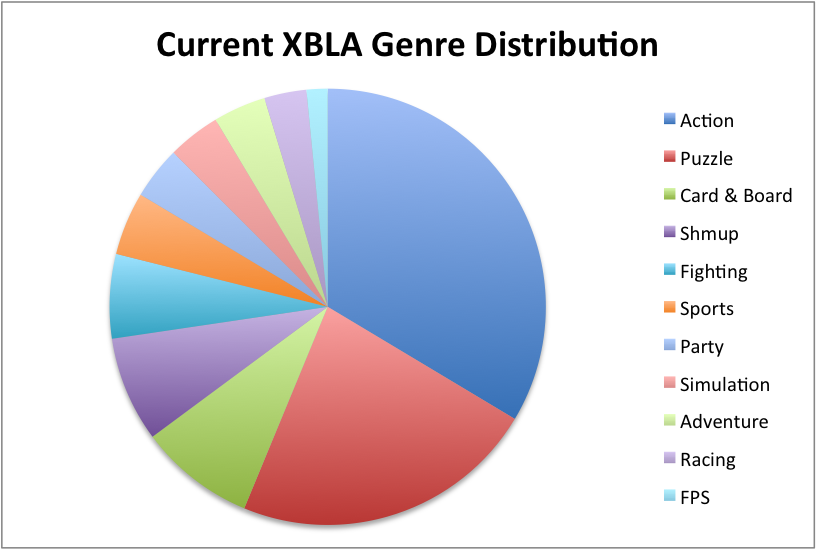 The current XBLA breakdown heavily favors action and puzzle games, which collectively make up 57% of the titles.

If we take a look at possible delisting by genre: 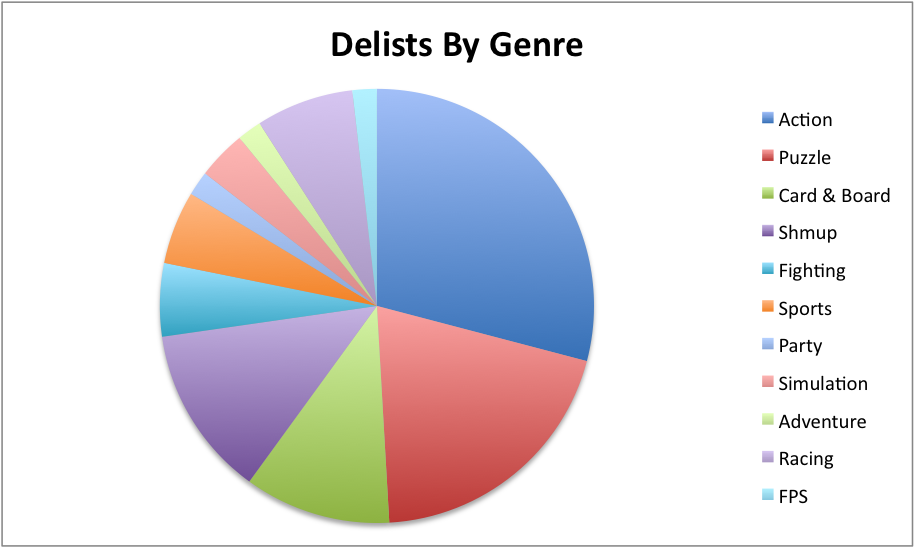 There is certainly some variance, as some genres are being hit hard (Racing is 100% at risk, while shmups face a 70% reduction) while others are fairly safe (Adventure/RPG games, as well as Party games, only face losing one of their own.)

But what’s truly interesting is that after we shake out the delisting, the genre distribution would look like this: 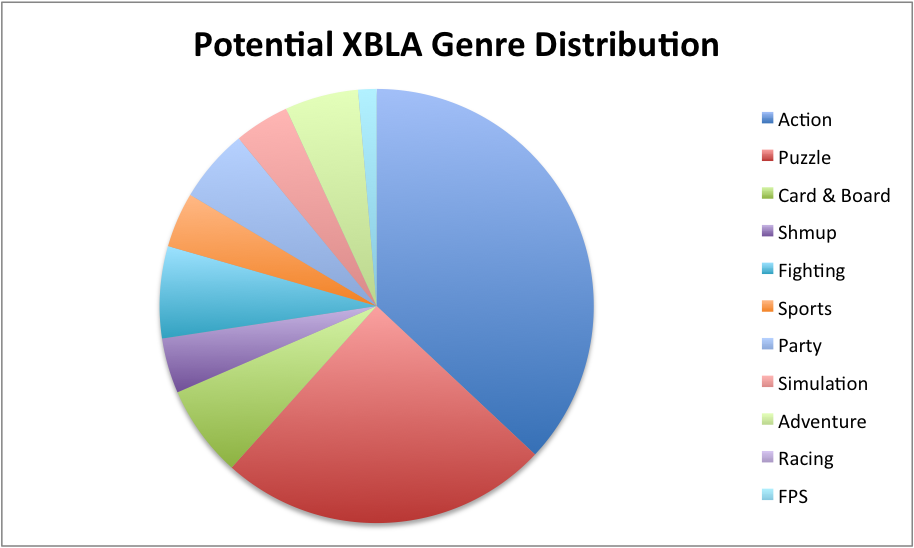 Notice anything odd? It looks *almost exactly the same* as the market before. The changes are subtle – no individual genre gained or lost more than 4% of the total share. The most significant change is that racing would be eradicated completely from XBLA were this to happen. (I’m sure [Yaris](http://www.metacritic.com/games/platforms/xbox360/yaris) fans will be crying themselves to sleep.)

Lessons learned? **The proposed delisting of titles will not radically affect the distribution of games across genres. Nor will it drastically reduce the ratio of remakes to original titles.**

(For those who like random abuses of Excel, [my spreadsheet is available](https://vjarmy.com/pictures/360/xbladelist.xlsx).)

This policy has potential to harm both consumers and producers, if it hasn’t already.

Consumers can no longer be guaranteed their purchases on XBLA will be available for download should they suffer a hardware failure or have to remove the title due to disk limitations. With no ability to resell XBLA titles, and no ability to make backups, it now is quite possible that users will begin getting screwed out of accessing their purchases.

Developers who were sold on a platform have had the carpet pulled out from under them. (Perhaps in more ways than one, as one developer I talked to today only heard about this announcement after I told them.) Because XBLA titles have had the advantage of an availability period that far exceeds that of retail, an employee from Sidhe [estimated](http://www.neogaf.com/forum/showpost.php?p=11287379&postcount=337) that this could cost small studios roughly $127,000 in revenue.

Let’s not ignore the effect that announcing this policy publicly will induce, either. Savvy gamers will be less willing to take a chance on games that fall under the 65% line on Metacritic. This will drive conversion rates lower, making it harder for companies with titles in the middle range of reviews on the virtual shelves. The cycle will feed itself.

I will be the first to admit that based on some of the titles on XBLA, the primary intentions behind this policy – quality over quantity – make sense. But in what I can only think of as typical Microsoft fashion, this is the exact wrong way of doing it. **Quality control comes _before_ games launch, not after.**

Perhaps the most absurd thing of all is that Microsoft chose the line to be 65%, which Metacritic defines as:

## Barbarians At The Gate

Xbox Live is under assult on all sides from strong competition. PSN, while lacking in quantity, is providing scores of quality with titles like *Warhawk*, *Gran Turismo 5 Prologue*, and *echochrome*. WiiWare has significant buzz with titles like *My Life As A King* and *Lost Winds*. Steam is adding community features putting it on par with Xbox Live, only without a $50 a year fee.

Finding themselves under siege, backed into a corner and being outmaneuvered, Marc Whitten and his team have done what Microsoft seems to do best: stabbed their service in the foot.