Thursday night, we were playing Rock Band, and she was giggling again.

“What?” I asked between a break in the lyrics.

“Nothing, nothing!” Katie smirked as she kept banging on the drums.

But I knew what it was: my vocals were coming through too loudly, and they sounded ridiculous. A quick visit to the controller and my vocals were muted behind the lead vocals, allowing me to avoid being mocked for the time being.

END_OF_DOCUMENT_TOKEN_TO_BE_REPLACED 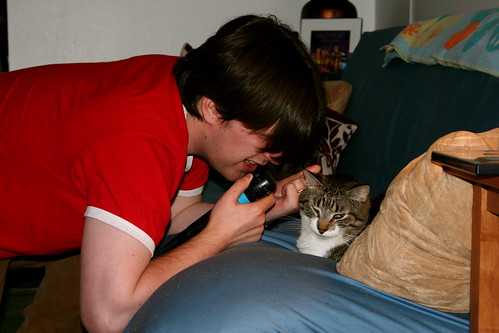 You will be forgiven for forgetting – what with the Wii and the PS3 launches – that Singstar Rocks (the US version, anyhow) shipped last week. [I posted about the tracklist previously.](https://vjarmy.com/archives/2006/09/singstar_rocks_us_tracklist.php) $50 gets you two microphones, 30 songs, and the ability to torture your cat by rocking out to Bloc Party.

The interface remains mostly unchanged from the UK version of Singstar Rocks. One thing I don’t recall being in the UK version (maybe this is in other version) is a “rap meter”, which appears at the very least in Summertime. Also, the menu music has changed.

(Thanks to Katie for the somewhat embarrassing picture.)