Thursday night, we were playing Rock Band, and she was giggling again.

“What?” I asked between a break in the lyrics.

“Nothing, nothing!” Katie smirked as she kept banging on the drums.

But I knew what it was: my vocals were coming through too loudly, and they sounded ridiculous. A quick visit to the controller and my vocals were muted behind the lead vocals, allowing me to avoid being mocked for the time being.

I am one of the first to admit that I don’t have a fantastic singing voice. But strangely, I find music games in which I have to (or can) sing – *Rock Band*, *Singstar*, and to a lesser extent *Karaoke Revolution* – way more compelling than those where I’m pushing buttons on a plastic guitar or spinning a plastic turntable.

I think it comes down to translating your knowledge into the game play. If you know a song, then singing it doesn’t require a complicated interface and mechanics to “play” the song. But guitars, drums, and samplers have to be translated into something that can be brought into the home. Even if you know the guitar part to *Say It Ain’t So* cold, you couldn’t play the Expert Guitar on Rock Band without looking at the screen.

The proof of my bias is in the DLC receipts: in the 3 months the US Singstore has been open, I have purchased 47 songs for the PS3 version of Singstar. In the 9 months that Rock Band has been available, I’ve purchased a mere 39 songs.

## The Cycle Of Games And Music

There’s a feedback loop affecting what games I buy and what bands I listen to that I’ve been meaning to write about, and this post is probably the best spot for it. 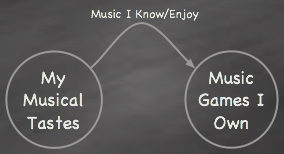 I am more likely to buy a game with songs I know and enjoy. This isn’t to say an entirely unknown music game is out of the question (particularly for me), but for games with licensed music, recognition plays a significant factor in my desire to purchase. I have skipped over the recent *Guitar Hero: Aerosmith* primarily (but not solely) because the bulk of the song list are songs I don’t know or don’t have interest playing. 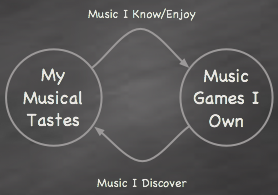 Meanwhile, if I discover songs through these games, I am quite likely to start an interest in the band.

This effect isn’t limited to music games – traditional games certainly have impacted my musical tastes, ranging from the GTA series (most recently “Oi Oi Oi” by Boys Noize) to Burnout (“Cities In Dust” by Junkie XL) to The Go! Team (all the Little Big Planet trailers didn’t hurt my love of “Get It Together”).
But the effect is more pronounced with music games because *the song is your playing field*. And no game has made this more true than beatmania IIDX: songs related to the series make up over 10% of my music collection.

Rock Band introduced me to Coheed & Cambria and Flyleaf, and finally sparked a solid interest in The Strokes, The Hives, and Queens Of The Stone Age.
Singstar has introduced me to Kasabian, The Bees, and most noticeably for the context of this story, Hot Chip.

Hot Chip illustrates this point very well, actually. I had seen the hype train pulling into the station a year ago, and dabbling in their music didn’t do anything for me at the time. But when *Over And Over* appeared on the Singstore – giving me a very selective 30 second clip – I came around, and bought the song. Then I picked up the album the song came from and I have a general admiration for their stuff.

The music industry would be smart to continue exploiting this feedback loop. The sales benefits have been documented, and it’s a fairly effortless way to grow your fan base and make money at the same time.

(As it turns out, *Over And Over* is smack dab on my vocal range – I don’t have to shift octaves or strain my voice to hit the notes. Soon, it became one of my standards while playing Singstar. It’s near Katie’s range, but she has issues on a few sections; she much prefers the female part from DJ Bobo’s “Vampires Are Alive”.) 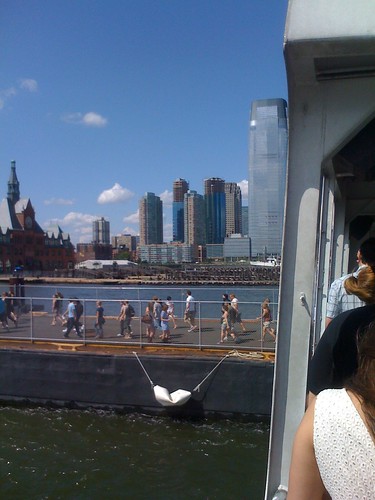 A day after our Rock Band session, as our last hurrah before packing – and a well-timed first hurrah for Jersey City – we took ourselves to All Points West for a day of music and relaxation. Our new apartment building is quite close to Liberty State Park, making it a very significant day – one week forward, and this would be our new neighborhood.

Due to timing of the ferry, we missed The Go! Team’s set; after watching a few songs by The Duke Spirit, we wandered into Sony’s tents. The next band we cared about wouldn’t be on for over two hours, so we played *Motorstorm: Pacific Rift* (solid if not spectacular), *Buzz: Quiz TV* (just as fun as I expected), and *Little Big Planet* (which will get its own post).

We had avoided the Singstar section of the tent because it wasn’t new and thrilling to us, but then we heard: they were going to have a competition starting shortly. With prizes – first place would get 4 VIP wristbands for the duration of the weekend.

Katie, in the hopes of finding something to do, went to sign us up. Knowing my vocal limitations, I wasn’t quite as jazzed. Soon she brought over the song list – we had to pick one song, and one song only. Staring me in the face was *Over And Over*.

For the next hour, I enjoyed the contest. There were lots of good singers, a few not-so-good singers, and a couple of obnoxious guys beatboxing. Radiohead’s *Creep* was picked about 7 times – given that Radiohead was headlining the show, I shouldn’t have been surprised.

Every semi-good player caused Katie to go into a minor panic attack; I was frequently told “We’re in trouble” when someone would be doing reasonably well. Years of beatmania have allowed me to eyeball time remaining versus score and estimate performance; I spent 45 minutes trying to calm her down. Sony’s staff kept entering more people; I wandered back to the LBP tent.

5 minutes into my game, my phone buzzed. “Last person! Get back here now!”

Minutes later, I was holding four VIP wristbands, much to the confusion of the other players. Most of them hadn’t seen me sing. 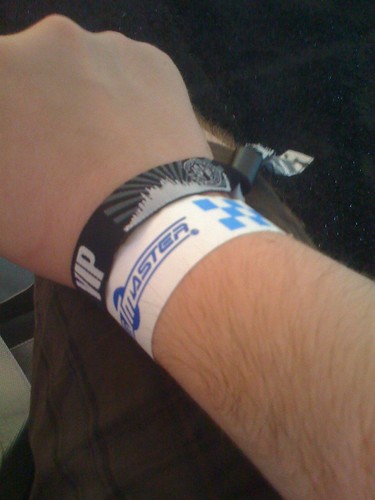 In the 25 years I’ve been gaming, this is the first time I’ve ever won a formal competition. Out of all the games to win a tangible prize for, it’s the one where I have to sing. The irony is palpable.

We gave one to another player who had chatted us up during the contest; the other eventually found its way to an exhausted Kathryn Yu who was running from photo pit to photo pit.

While I never would have paid for entrance to the VIP area, I can’t say the wristbands weren’t welcome. Avoiding the food lines, having access to proper seating, and an air conditioned tent all made the remainder of the day that much more enjoyable.

The remainder of the night? Underworld did a good set (albeit limited due to sunlight and their set length limit); Girl Talk tore the roof off the secondary stage, and Radiohead were everything I had hoped. We made it home by midnight and collapsed.

Not long after we got the wristbands, we sat right on the waterfront, eating pulled pork and slaw from Famous Dave’s, with a fantastic view of the Statue Of Liberty and lower Manhattan. I sighed happily and smirked at Katie.

“You realize you can’t make fun of my singing anymore.”

It hadn’t even been a full day since we were playing Rock Band and I was muting myself. She smiled and sighed, knowing she had lost the war.

Twenty-four hours can make all the difference in the world.