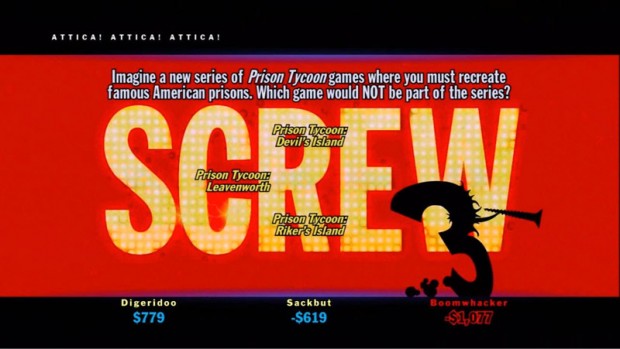 2011 felt like the year that a number of old franchises were dusted off, given a warm bath to get the color back in their cheeks, and re-presented to the world.[1. It may be worth noting that Duke Nukem Forever is not on my list of games.]

Of the three that made my list, I was most excited about the return of You Don’t Know Jack. The original series was one of the few games that delivered on the promise that CD-ROMs offered. It was whip smart and absurdly funny.

The world has changed in the sixteen years since the series premiered, and that manifested itself into a more console-friendly experience. The randomly selected pool of questions is out, and a series of episodes each with eleven questions are in. With a nod to other quiz games trying to keep all players engaged, there’s no longer buzzing in – everyone can play every question. Some question types are gone (the much beloved Gibberish Question being the most notable), and some new ones are in (including the amazingly named Cookie’s Fortune Cookie Fortunes (with Cookie “Fortune Cookie” Masterson)). And so on.

These changes are fairly hit and miss – the biggest shortcoming being that an eleven question game feels pretty damn short. Luckily, you won’t always notice, as the strength of the writing is just as good as it was during the original series peak[2. Which, in my opinion, was Vol. 4 The Ride.]. Tom Gottlieb returns as host Cookie Masterson, and the tone of the game just feels so perfectly right. Few games can manage to have such a clear house style as YDKJ has managed to over the years.

In a perfect world, someone would combine the writing and style of YDKJ with the robustness and functionality of Sony’s Buzz series. And given THQ’s rumored monetary problems, the odds of us seeing another title in the series are probably pretty low. Even if this is one last gasp at YDKJ returning to the world, it brought me a lot of joy, as it will to anyone who enjoys trivia, puzzles, and lisping ventriloquism dummies.