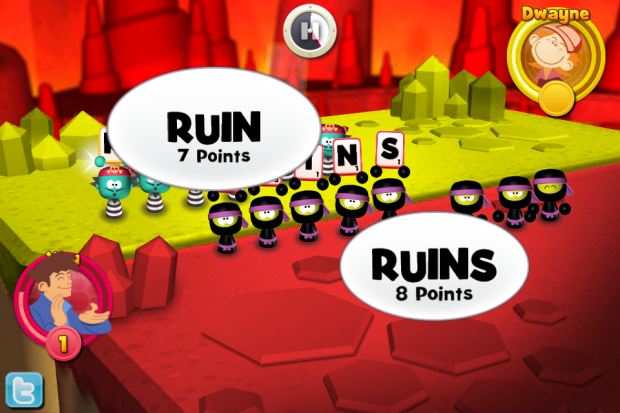 For reasons that may become clear in a later post, I’m short on time for today’s post; as such, it’s perfect for a little game like Quarrel Deluxe.

Quarrel is 50% Risk – you have a map, and cartoon soldiers, and your goal is to take over all the territories. But it’s also 50% Countdown, that much beloved British institution, as the way you win battles is by spelling more complex words than your opponents.

That game combination is practically a mix of chocolate and peanut butter in and of itself. The well-drawn art, the AI personalities, the career mode and daily challenges, and the nice layer of polish on the game just make it even tastier.

The one negative I hear people throw around with Quarrel is that it doesn’t have multiplayer. I reject this criticism; if there’s anything online gaming has shown us, it’s that word games with multiplayer tend to be fraught with cheating and fraud. Dictionary tools and anagram finders mean that playing against unfamiliar opponents is often an exercise in “Great Vocabulary Or Cheater?”. Given the real-time nature of Quarrel (ties are broken by the fastest submission), I actually prefer the game without running into the game-breaking dangers of having an online component.

Quarrel Deluxe is available as a Universal iOS app. There’s a non-Deluxe version available for free, although I can’t tell you what the limitations are.