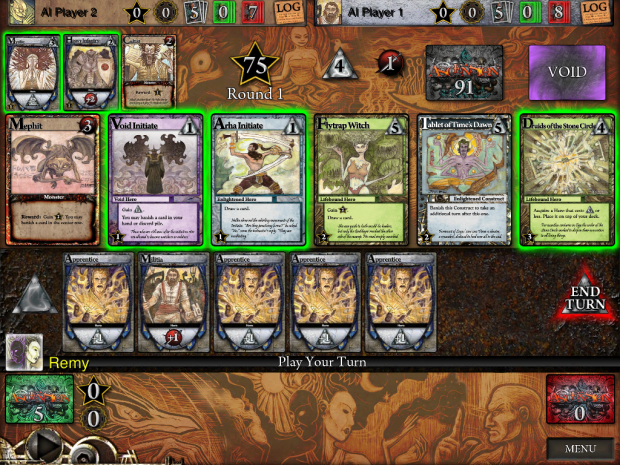 As someone who spent a disgusting amount of his childhood allowance on collectable card games (CCG), I have a hard time resisting their siren song. It’s a very weak spot in my gaming spectrum, and one that can quickly lead to financial ruin – especially digital versions where booster packs are a click away.

I’m happy to say that Ascension: Chronicle of the Godslayer scratches my itch for a CCG without exposing my wallet to trample damage. Those of you who get similarly itchy around Magic: The Gathering cards, pay attention.

Most CCGs work under a prebuilt deck model: you enter the game with your personally assembled deck of cards, and compete against one or more other players with their own constructed deck. Ascension is not one of those games; it is instead a deck building game. All players start out with the same ten card deck, and uses their five cards drawn per turn to generate Runes and Power (if you’re a M:TG player, think of mana). Runes can be used to recruit Heroes or Constructs out of the communal center row, which then get added to your deck. Power can be used to defeat Monsters in the center row, which tend to include a side effect. The overarching goal is to collect more honor tokens (through recruiting heroes or defeating monsters) than your opponents before they run out.

Because you’re constructing your deck as the main game mechanic, there’s no concept of add-on packs, saving you the pain of opening virtual boosters in the hopes of getting cool cards. One might worry there’s not a lot of variety in strategy when you’re working off a shared deck of cards, but you won’t see all the cards from the main in the course of a single game, so you do get a lot of variation from game to game.

While A:CotG is available as a physical card game, I grew to love the game through the iOS version. Playing a lot of board and card games on my iPad, I can say it’s one of the best designed experiences since Carcasonne[1. If, by some chance, you don’t already own the iOS version of Carcasonne, you should drop everything and go buy that immediately.]. The interface is extremely well designed: appropriate controls are in reach, game prompts are intuitive, and the card art is clear. There’s asynchronous online play through Game Center[2. Developers that choose to use OpenFeint as their primary matchmaking method frustrate me. Developers that choose to write their own account systems – as one did when adding multiplayer to a title I’ve owned for over a year – piss me off.], which allows you to juggle multiple games at once in an effective manner. It’s about a solid as an online implementation as you can get for a card game, although it does lack chatting functions from what I can tell.

I’ve spent all of $8 on Ascension – $5 for the core game and $3 for an expansion IAP that adds a whole new set of cards to the core deck. That’s 1/5th the cost of my horrible 14-year-old self’s decision to buy a full box of [Fallen Empires](http://en.wikipedia.org/wiki/Fallen_Empires) boosters, and I’ve gotten far more enjoyment out of this. If only I could’ve saved 14-year-old me.

Ascension: Chronicle of the Godslayer is available as a physical card game as well as a Universal iOS app.