Over at [random()type](http://www.randomtype.com/?p=190), someone noticed that dropping an iPod game onto Stuffit Expander results in a decompressed bundle.
I have purchased six iPod Games at this point, so I figured some poking around may be useful for the sake of science.

There are a handful of files that are common across all games:

This folder contains two files for each game: a .bin file, and a .sinf. The name of the bin file is of the following construction:

The name of the sinf file is exactly the same as that of the bin file – include the .bin extension – with an extra .sinf extension.

The .bin is the executable, as shown in the manifest below; the .sinf file appears to have something to do with the FairPlay DRM as my name is recorded in the file.

Nothing useful comes out if you try and run strings on the binary.

This is presumable the “album art” photo that shows up when you view a game in iTunes. [Ben Sinclair noted](http://bensinclair.com/article/whats-inside-an-ipod-game) that it’s a JPEG file.

This file contains resource-fork style data with the metadata that shows up when you get info on a game in iTunes.

The manifest file describes all of the files internal to the bundle. All files get a Digest (not md5, can’t determine the algorithm), a Path, and a Size.

There are two extra plist keys used for the binary: one called *DRM* (set to true) and one labeled *Verify* (also set to true).

At the end of the manifest is an array with the key of “Platforms”. This contains keys that we’ve seen before – *BuildID*, *PlatformID*, *PlatformVersion*, and *Size* – as well as ExecutablePath (specifies the binary) and *LaunchingArtwork* (specifies the file to display while the game loads).

This is the PKCS #7 format certificate for the Manifest.plist file. This is undoubtedly to check the integrity of your Manifest.plist. Certificate is signed by the [Apple Root CA](https://www.apple.com/certificateauthority/).

The Resources folder is used locally by iTunes to show the help screen when you view it in your library. There is typically a JPEG, which is what displays to the user, as well as an XML file (Description.xml) which basically sets the layout.

Resources contains separate folders for each localization. Note that all the localizations are listed in the manifest, so trying to remove them would probably break your game if iTunes is actively checking the bundle integrity.

It’s a crap shoot. Some games have very tidy bundles – Apple’s two games in particular – and some are a mess, like Mini Golf.

All of the in-game audio tends to be as a .wav or a .m4a, and there’s no copy protection on them. If you’re dying to hear that Tetris remix somewhere outside the game, well, there you go.

Cubis2 has localized strings files, but without delimiters, it’s difficult to tell what they’re for.

Mini Golf’s bundle is a mess because all the course data is loose in the root folder. This includes localizations like hole names. Yeesh.

Tetris has Strings.dta, which is tab delimited and contains all the strings for all the languages. Very easy to read, and amusing to read the rules of Tetris in multiple languages.

This one was a lot of fun.

Holdem has a Localization folder, and three files full of strings. Apparently there are a number of secret characters – two aliens (one “with a crazy inappropriate name” of BUTCH, on “with big mouth” named MOUTH), three robots, and five dogs – a rottweiler, a bull mastiff, a pug, a bulldog, and in what may be the funniest easter egg I’ve seen from Apple in a while, a chihuahua named BERTRAM. There’s also a secret cheat menu as evidenced in strings.strings,

Also in strings.strings are a list of locations in the game, including an Apple Conference Room, The Dog House, and Zythlgrak (in the Alpha Centauri System, natch).
There’s also a strings file for the tutorial, which includes a number of strings with graphic placement data named things like “DO NOT LOCALIZE ME 16”. This is additionally funny since all of them are preceded with a comment of “do not localize this”. Perhaps I should localize it.

Vortex has a text.strings file that mentions a cheat mode. Oddly, it’s not constructed at all in the same way as Texas Hold Em, and is considerably less fun.

All of Zuma’s text is in graphic form, so no stringy goodness.

* Modifying the games is difficult at best, if not impossible, because of the checksumming of every file in the bundle, and then the certificate against the manifest.
* Game resource files, particularly audio, aren’t obfuscated and can be extracted successfully.
* Homebrew is probably an impossibility at this point because of the expectation of a signed cert from Apple.
* The fact that there are platform identifiers in the plists makes me wonder what Apple’s future plans entail. Maybe this would just be for later iPod revisions, or maybe they’re just looking forward. Still, quite interesting.

If you find anything else interesting, let me know, and I’ll add it to the post.

Since that day, a sequence of three words have existed in the collective mind of the Apple-following world. This is my least favorite phrase.

END_OF_DOCUMENT_TOKEN_TO_BE_REPLACED

I had some change to blow from a previous gift certificate on iTMS, so I decided to buy an episode of Lost and see what interesting stuff I could find.

First, the main summary in iTunes: 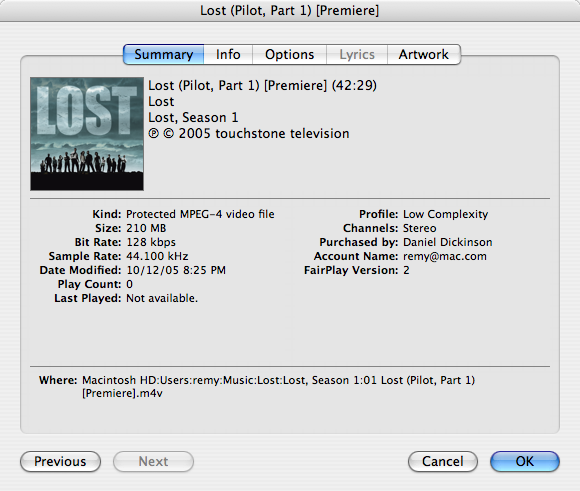 I think the listed bitrate means jack (see below QT screen); very notable is that this has FairPlay version 2 DRM. Also, file type is `.m4v`. 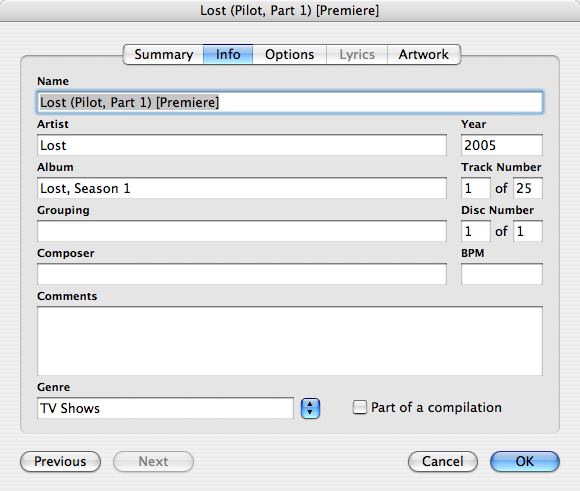 Nothing terribly surprising here, although it’s nice to see proper track numbers on a per-episode basis. I wonder if we’ll lose the “Album” and “Artist” labels for TV shows in the near future, they seem a little inconsistent. 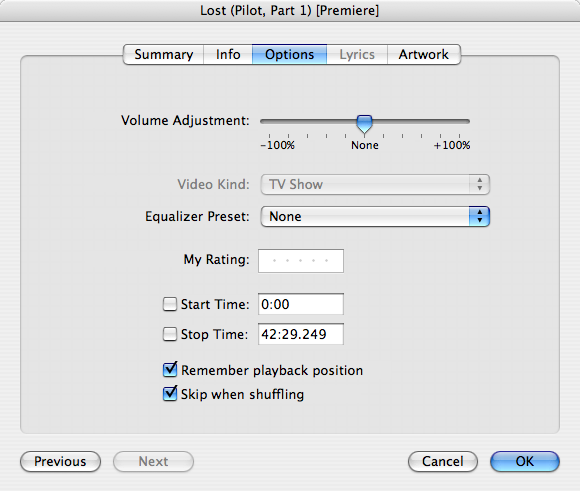 “Remember playback position” is checked by default, so they act as bookmarkable files. The “Video Kind” field is interesting; I obviously can’t select a value here, but on the two videos I did have in my library (both episodes of Teen Homicide), I can only pick from “Movie” and “Music Video”. It would be nice if I could choose “TV Show” for, you know, if I add my own TV shows.

Now, going outside of iTunes:

The path is unsurprising given the metadata (I use `~/Music/` for my music directory), so no tricks there. Failing to find fun here, I pulled it open with Quicktime Player: 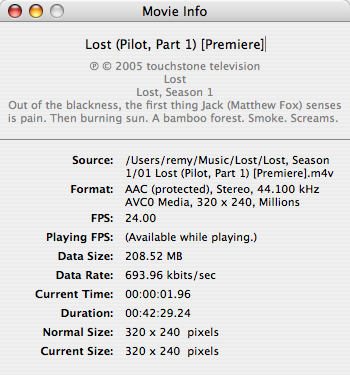 Here we can see the proper bitrate (693.96 kbps), dimensions and framerate, and most amusingly, the metadata for the description of the track – which is totally unexposed in iTunes once you buy a show – or at least a chunk of it, anyhow. (This data IS available in the store, as the description.) 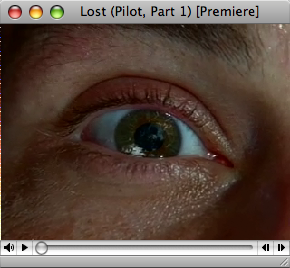 Above all else, I am fairly impressed with the quality, although like everyone else, I wish the video was a touch larger.