I’ve spent a lot of time in 2011 playing games, but not a lot of time writing about them. Instead of my usual end-of-year game recommendations, I’d like to tell some stories or share some thoughts about the ones that meant the most to me this year. This is the last post in the series. See all Games of 2011 posts. 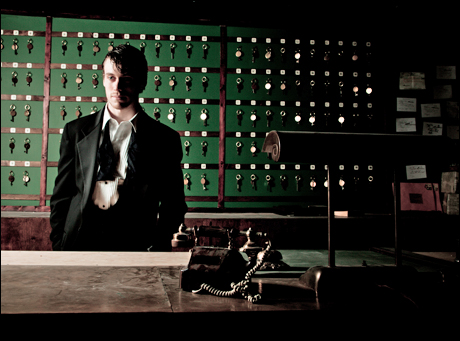 Surprise: my Game Of The Year isn’t a video game. (I never said they were all going to be electronic.) And yes, it’s Punchdrunk’s Sleep No More, which I’ve talked about on this blog twice before, and is perhaps the closest thing to a real life video game I’ve ever found, and perhaps ever will.

Those of you who follow me on social networks have probably missed out on the incessent gushing about the show I tend to do in person. It has become an all-consuming experience; I have made a somewhat absurd four visits to the McKittrick Hotel for performances, including one just over a week ago. Some might feel this is three times too many. (Others might argue it’s four times too many.) I am fully and well hooked on this thing, and I won’t be surprised if I notch a fifth trip sometime in 2012. The friends who have been tend to be understanding and share a desire to go back. Here’s why:

People who have played games for a significant length of time have certain behaviors become hard wired into their play style. If you grew up with Wolfenstein and Doom, you become accustomed to pressing on every wall, hoping for a secret passage to open. RPG addicts know to search every container in the hopes of finding something useful or interesting. Stealth-action gamers are used to slinking along behind characters, hoping to figure out their secrets. And so on.

These skills are generally not acceptable to use in real life; most of us don’t spend our days exploring strange spaces, investigating someone’s bedroom, or following strange people about their business. This is where Sleep No More fits in perfectly – it’s a meticulously designed playground where you can make use of these habits and skills. This is a space where you want to be looking, touching, feeling, and exploring at every turn.

There’s no way to win this game, of course – the show ends after three hours, and you are gently ushered out of the hotel space. There’s also no way to see every last thing that happens during the show in a single visit. But you may have pieced together how some characters interact, or found a secret passage, or even helped run messages between characters.

Punchdrunk has designed the show to allow the audience the freedom to indulge in anonymity and voyeurism – the masks, the mandate that there is no talking inside the space, the use of light and shadow. The experience makes it easy to detach from yourself and become your own avatar, so long as you can break down some of the psychological barriers that tend to prevent people from doing the things you should do in this world. (More on these later.) The cast has a trick up their sleeves, of course: they are fully allowed to interact with you, and will choose to do so with those that are clearly engaged and unafraid. As you are told in the elevator, fortune favors the bold.

This is not a world for the faint of heart. The company now warns that the audience may experience “intense psychological experiences”. There is violence (multiple murders), nudity (both genders), and absinthe served at the bar. There are strobe lights, smoke machines, and in one scene, some incredibly loud drum and bass music. There is running up and down flights of stairs, and the slight-but-ever-present danger of being hit by one of the staff as they perform their dances (as Katie learned when she was kicked in the arm during our last visit). The show lasts at most three hours, which may be more than those with low stamina can withstand.

But no matter how much my feet hurt when I exit back into the streets of Chelsea, there is nothing else like it I’ve ever experienced in my life. I feel so fortunate to have gotten to go as much as I have, and yet I always want to go back as soon as I can. Everyone who enjoys games as a hobby should make a point of going before the show ends its run, whenever that may be.

The remainder of this post, as some sort of twisted holiday present, are essentially my complete set of notes about the show – how it’s structured, how to plan your visits, and even a set of imaginary achievements. The information in that section is extremely spoilery, and I agree with the common wisdom that you should take in your first visit to the show essentially blind – it’s more fun that way. So save the details in the rest of this post until you’ve gone once.

Sleep No More is currently extended through February, and may continue to extend as Punchdrunk sees fit.