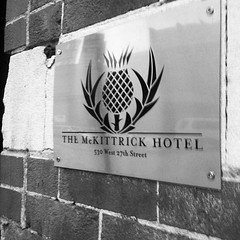 “Please wait here”, the nurse whispers softly in my ear, having lead me by the hand to a doorway through a crowd of people. I nodded silently.

She enters the room, shoos out a person, gestures for me to wait one second, and closes the door. I stand facing it, waiting, quietly smiling to myself. Others hover around me in the tight, dark hallway of the asylum, curious as to what will transpire.

The door reopens, and she takes my hand again, pulling me inside, and closing the door behind me. We are alone. This seems very familiar, for the moment, for multiple reasons. I had visited this room under other circumstances barely half an hour previous. A small office, no bigger than 8’x8′, with a desk and a psychiatrist’s couch. But it was brighter now, a stark contrast to the general darkness of the fifth floor.

She turns me around to face her in the middle of the room, and our eyes lock as she reaches up slowly and removes my mask. I immediately feel exposed, vulnerable, almost naked. Realizing I may be too easily read, I manage a small, subtle smile to match hers. She gestures to the couch, and I sit down in the middle. She sits to my left, our eyes still locked. My mind fights with itself, trying to figure out what’s going on while relinquishing control to whatever may be coming next. Is she studying me? Is this a psych evaluation?

She gets up, and gestures at the pillow to my right. I shift over, laying horizontal, folding my hands on my stomach as one generally assumes you do when on these sorts of couches. She walks down the length of the couch, studying me (dressed, as directed, in all black – black suit, black shirt, black tie, black shoes and black socks), then again gazing at my face. She draws closer, and closer, and begins to lean in near my face. I turned my head slightly, expecting her to whisper to me again.

Instead, her hand went to my cheek and she kissed me softly just below my right eye.

She walked back to the foot of the bed, and began to reach up in the corner to something tall, covered by a plaid blanket. The soundtrack playing in the room moved to a high enough volume that I realized it was unfamiliar and slightly unnerving. I maintained my composure as best I could as she removed the blanket – and just the blanket, with no surprises underneath – and began carefully laying it over me. When she reached my face, the blanket went over top of it, and a near moment of panic subsided as she folded it back. A quick pass up and down the couch and she had tucked me in (albeit with my arms still folded on my stomach).

She reached over my head and turned on a lamp, directed it at the wall, and pointed at the wall, where scrawled in chalk was a premonition about Duncan. The soundtrack swelled and crashed as I read it multiple times and tried to comprehend.

I turned back to my host, who again looked deep into my eyes while hovering over me. And then, she coughed. And again. One final, stronger cough, and a metal nail emerged from her lips, falling into her hand. We both looked frightened.

Quickly, she pulled the sheet back, pulled me up off the couch, and retrieved my mask off the desk. I stood there patiently as she placed it back over my head and gave me a quick look to make sure everything was in place. She leaned in again to whisper one final instruction, and in the moment I felt ready to do just about anything she could’ve possibly requested.

Oh, my dear, sweet nurse. That is the one thing I could not do.

Sleep No More has been extended at the McKittrick Hotel through December 30th.