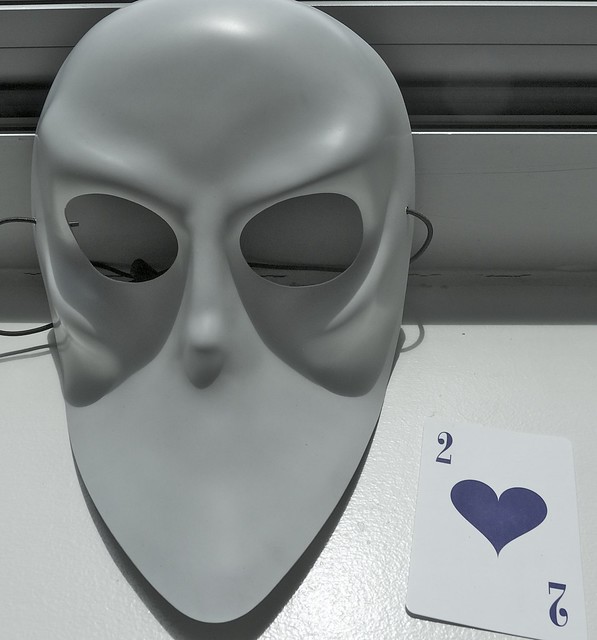 On Saturday night, I stepped into the McKittrick hotel with five friends. Three hours later, I found myself back on the sidewalk of 27th Street, catching my breath, my heart still racing, my mind still spinning.

If you keep an ear to what’s going on around NYC, then you may already know that the McKittrick is home to Punchdrunk’s “immersive theatre” experience, Sleep No More. Audiences are invited to don a mask and explore 100,000 square feet of a recreated abandoned hotel, while a cast of twenty-three actors stride from room to room and silently act out Macbeth by way of Hitchcock. Some audience members choose to follow one or two characters and see what happens; others opt to explore on their own, rifling through drawers and cabinets and suitcases. The choices are up to each attendee.

Much has been written about the experience, and I am loathe to rehash. You might want to heard the observations on the inherent voyeurism from Ben Brantley at the Times, or Michael Abbott’s lovely argument as to why anyone who calls themselves a gamer needs to go see it. You may be interested in the amazing set and prop design, which would lead you to this NYT slideshow. And there are plenty of other impressions around the web, almost all positive.

My normal way to talk about these sorts of experiences is to meticulously walk my way through everything that happened, trying to gather all the details so they form a single authoritative post. I am going to skip on that method for Sleep No More. I may have caught multiple scenes, I may have followed most every character at least once, I may have dug through a lot of drawers – and I may have even found an easter egg or two. But that experience was mine, and when you go, you will have your own – and it will be different, and unique, and yours. I do not want to taint that or come across as recommending a course of action.

But I will share one story from last night, after the jump. (This might constitute a spoiler, so if you’re looking to go in blind, stop reading here.)

Despite the invitation to search through the sets and run after whoever you’d like, much of the audience tries to preserve a certain amount of space from the actors. The actors, on the other hand, are not against occasionally reaching out and interacting with audience members, typically by grabbing their hands and running with them into other rooms, but sometimes by crying on their shoulders or gesturing to them for assistance. Sometimes more. For lack of a better term, I will refer to these as one-on-ones.

I would argue that being involved in a one-on-one – even if it’s just a run between rooms – transforms Sleep No More. You are likely to spend most of the length of the show building up courage, ignoring your typical urges against digging through someone else’s desk or materials, starting to believe that you are a spirit and that you are just observing this world. A one-on-one shatters that space between you and the world instantly, and perhaps more so depending on what happens to you.

And so last night, just over an hour into the performance, I watched as two characters danced and fought in the candy store, eventually leading to the witch in a green dress (officially in the program as “Sexy Witch”, and for the night in question played by Ching-I Chang) feeding a special piece of candy to the other character, who coughed and sputtered as though he was poisoned, and ran away down the hallway. Many audience members followed after him, but I and a few others waited for the witch to leave, and began to follow her down the hallway.

As we hit a turn in the hallway, she turned and spun to look at us. I realized I was perhaps too close and she grabbed my hand, looking me straight in the eyes. The mask might as well have not been there. She gave me a mostly kind, partially mischievous smile and pulled me towards an open door, then towards another door at the other side. She gestured again as though I should wait as she looked for something. I looked over my shoulder, and saw a few audience members filing in after us. I turned back around, and she was putting a key into the door, opening it, and again pulling me inside – and quickly closing and locking the door behind us.

I was alone, in a bedroom, with a witch, who I’m pretty sure had just poisoned another actor. My heart rate went up, just a little.

She stood me in front of a mirror, still smiling and gesturing for me to watch the reflection. She began to look closely at my hair on one side of my head, and then the other, searching for something. Eventually she lifted something up from my hair, out of the reflection of the mirror – and brought down, in front of my face, the same piece of candy I had seen in the earlier scene.

We both smiled, my eyes perhaps giving me away. If this was a spell, it was working. She reached under my mask and placed the candy to my lips. I accepted it without a moment of consideration. (To the best of my recollection during this sensory overload, it was an orange fruit gem.)

Moments later, she was pulling me away from the mirror, towards a closet – one that doubled as a secret passage, leading into the back room of the Mortician’s Office. I leaned against the back wall and she began her dance for a new scene, and I blended back into the crowd of anonymous masks.

I slipped out halfway through the scene, now completely empowered to keep creating my own experience and view of what was transpiring in the McKittrick. It was not my only one-on-one of the night, but it was the one that transformed the experience on its head for me.

Depending on who you ask, Sleep No More is either running through September 5th, or October, or until they “run out of surprises”. There is one performance a night on weekdays, and two a night on the weekends. Tickets are $75-95 a person.

I recommend a lot of things that happen in NYC, and this advice is occasionally ignored or procrastinated upon. I cannot repeat enough how much you should go to this – if this at all sounds interesting to you, book tickets now. Schedule your visit now. Go now.

You do not want to miss this.