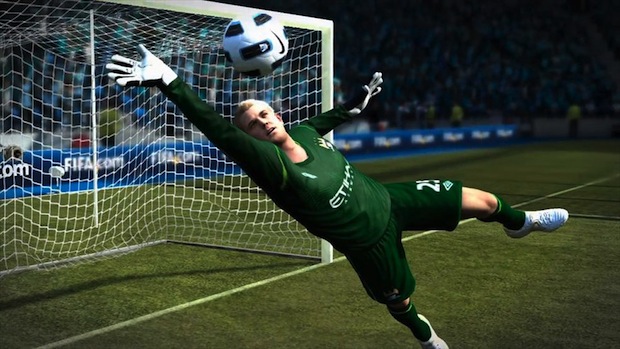 I’ve had a love-hate relationship with “serious” sports games.[1. By “serious”, I essentially mean “not NBA Jam, Mario Kart, or anything with motion control.”] They are rarely intuitive or come with strong tutorial modes. With manual size decreasing and annual releases churning out regularly, there’s a certain expectation that you’re intimately familiar with the series even before you touch a controller.

This is especially pronounced in EA’s FIFA 12. A scant manual of about eight pages highlights a handful of changes but doesn’t concern itself with telling you how the core game works. The game does launch with a tutorial, but mostly of a new defensive control system that doesn’t do a great job of explaining itself. Then, you are thrust into a giant menu system and left to find the mode you maybe heard about, once.

The gap between what you’re told and what you are expected to know how to do is greatest during the Virtual Pro career mode, where you join your favorite team and attempt to break into the starting XI over the course of a season. You typically only control yourself, and the first thing that will jump out at you is a numerical score next to your stamina bar. It starts at 6.0 (like most actual player rating systems do) and will fluctuate over the course of the game based on your performance. But the game never really tells you what raises your score and what lowers it. It’s pure trial and error in the hopes of eventually learning how to play in a way that the game feels is acceptable.

I understand that as the world’s best selling sports franchise, there’s little impetus in EA Vancouver spending time on a well written manual, or a tutorial mode that goes beyond “well, here’s a penalty kick, take it already, you fool!”. But I worry that so many sports games seem to be going down this road.

That said, I can’t be entirely down on FIFA 12, as it finally fulfilled my dreams of a online multiplayer sport. Shockingly, all of the FIFA 12 games I have played online have been lag free, have not been subject to any griefing or abusive voice chat, and generally have people who are not terrible playing. Strangely, it may have been the best multiplayer experience I had this year.