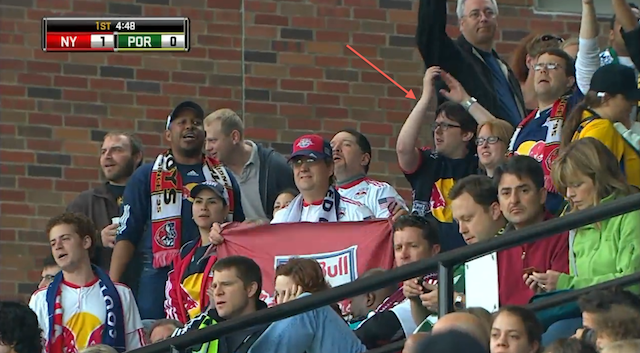 Out of the twenty MLS matches I have attended to date, that was by far the most interesting. It is also the first time I have stood with the Empire Supporters Club for the game, which involved 90 minutes of chanting, standing, and clapping.

Inside: thoughts about the officiating, the experience at JELD-WEN Field, and the inevitable hilarity that came from staying in the same hotel as the team.

A Game Summary, For Context 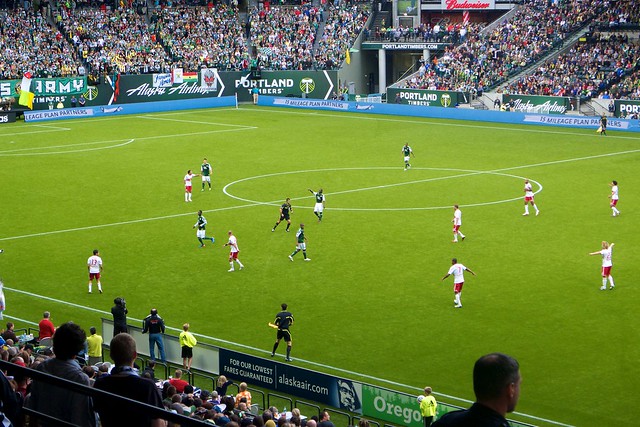 5th minute: Austin Da Luz scores his first goal for NY off a dummy pass to Henry, we go up 0-1. He runs over to the bench to celebrate, because he “spent a lot of time there”.

49th minute: Kevin Goldthwaite knocks a second in for Portland almost immediately after the first goal. Portland goes up 2-1.

68th minute: RBNY’s Stephen Keel mis-hits while trying to clear the ball and scores an own goal. 3-1 Portland.

93rd minute: Thierry Henry gets into a slight argument with Adam Moffat, and (being the chippy Frenchman he is) taps the back of his head twice as he walks away. Moffat shoves him from behind. A linesman nowhere near the play tells referee Ricardo Salazar that Thierry “hit him with an open hand in his face” (quote from coach Hans Backe). Henry is given a straight red card for “violent conduct”, while Adam Moffat earns a yellow for “unsporting behavior”. Henry sarcastically shakes the hands of Salazar and walks off the pitch. Almost no one in the stands knows what happened.

94th minute: Portland’s Rodney Wallace puts his arm out to stop a cross in the box. A penalty is called.

95th: Dwayne DeRosario steps up to the spot and converts the penalty, pulling the score back to 3-3 at the death. The final whistle is blown shortly after kickoff.

Video I took of the PK, and our reaction:

Some Thoughts On The Officiating

Much has been said about the way the game was called, particularly by RBNY GM Erik Soler:

We have carefully reviewed the film of our match against Portland last night and I can safely say that the level of refereeing was absolutely below the standards of what is required for a MLS match and completely unacceptable.

The league is facing a crisis of confidence up and down: coaches, players, fans, and managers are all in unison about how poor the officiating has been. The league has been mostly silent, although they happily suspended Portland coach John Spencer for daring to speak publicly about the refereeing in their match against Colorado.

Complaints about the quality of refereeing isn’t unusual in any sport, but the topic has been dominating the conversation around MLS over the last month. The pressure will continue on Don Garber to do anything to increase the quality of the refereeing. I generally have mixed feelings for Garber – admiring his ability to keep the league expanding after the contraction period ten years ago, while being disgusted at his inability to handle the issues affecting the quality of the game. Let’s hope he wakes up soon.

I will say that it’s a bit of relief that the final PK of the game was awarded for a very clear handball, and not for a situation where the replay would be inconclusive or lead people to complain about the possibility of diving.

Our Experience At JELD-WEN 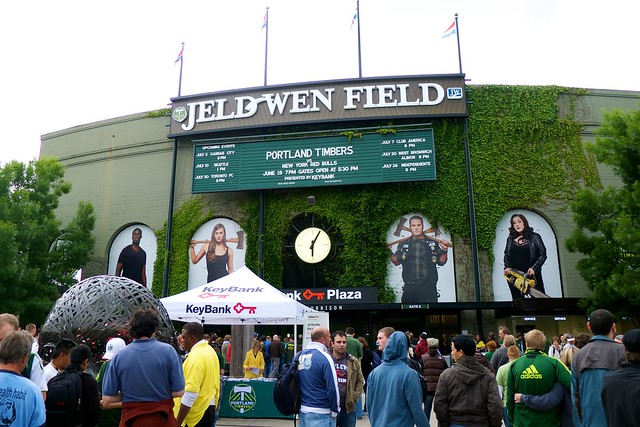 First impressions count for a lot, so here were the first three events relating to our experience at the game:

These three interactions are representative of the general experience. The stadium staff at JELD-WEN were polite and friendly, most of the fans were quiet or polite, and a small handful opted to hassle us with a minimal level of hostility.

The biggest positives of JELD-WEN Field are the location and the fans. You would be hard pressed to find a soccer-specific stadium in a better location relative to the city it’s for. Right on the light rail, but also very walkable and surrounded by bars and restaurants. We walked the 13 blocks back to our hotel in less time than it took us to normally even get on a PATH train after a home game.

I have a great deal of respect for the Timbers Army, who mostly show up nearly an hour early and get started with chants and flag waving early. (The South Ward, for comparison, tends to only start looking filled in 15 minutes before kickoff.) But it’s not just the Timbers Army – the whole stadium gets involved in some of the chants, and the place certainly gets loud.

On to the handful of complaints I had: 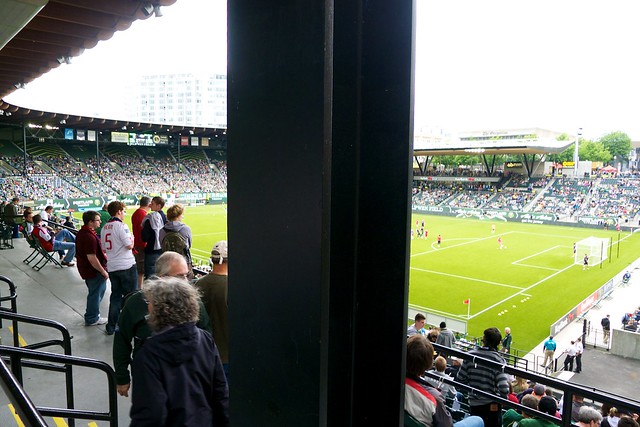 Away supporters are placed in section 223, which is in the southwest corner of the stadium in the upper level. JELD-WEN being very asymmetrical, a brick wall of another building is directly the right of the section. It leaves you feeling a little boxed in, and not helped by a giant girder placed directly in front of the section, which obstructs the view from a number of seats.

Calling them “seats” may also be unfair; the upper bowl is all narrow wooden bench seating. It is not terribly comfortable, and I suffered a slight injury from them.

That all pales in comparison to the main problem I had with the away supporters section: it’s not actually dedicated to away supporters. Timbers fans were scattered in between RBNY supporters, most noticeably a nearly full row of mouthy pre-teen girls (without their parents) in Timbers jerseys, the same girls who had walked the players onto the field at the start of the game. They opted to spend most of the same game back-talking at us, trying to be witty over our chants, and standing on their seats to block our view.

Perhaps this was a tactic to keep the swearing down. Perhaps it was just a way to needle us. Perhaps it was an attempt to maximize ticket sales. Certainly I have plenty of laughing memories (and some video which won’t be posted) of the girls arguing with various members of our group. But I do question the wisdom of filling in Timbers fans into the section, especially after dire warnings from the Timbers FO to not enter the Timbers Army section under any circumstances.

Overall impression: very positive. Portland brings a great energy and atmosphere to the league, and the city and local news media very clearly cares about the team. I wish I could say the same about NYC and the Red Bulls.

A Selection of Improvised Chants Employed By Our Section 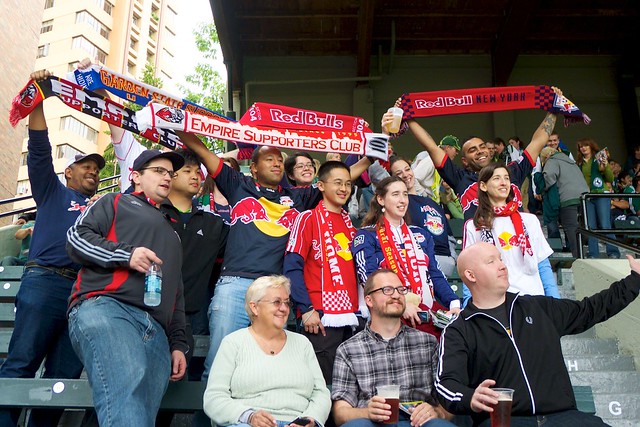 The Pros And Cons Of Staying In The Team Hotel 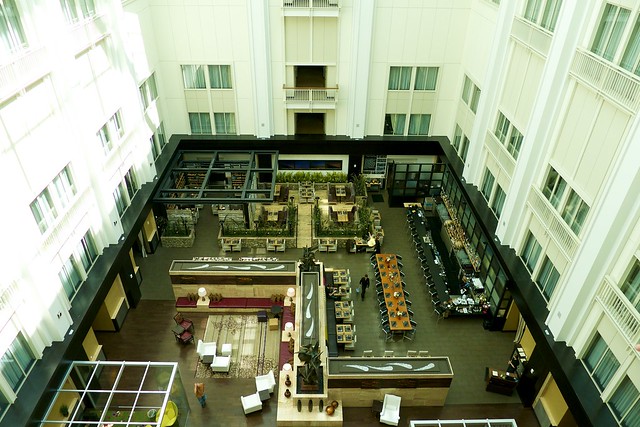 When we booked our trip, I had a small bit of inside knowledge: the team was going to be staying at the Nines Hotel, which was described to me by others as “the nicest hotel in the city”. After looking it over, we agreed that would be a great place to stay not just because of the possibility of running into the team, but also because it looked like a great hotel. (And it certainly was – my only complaint was the wifi being a little slow.)

But we miscalculated in one slight way: we booked a “Club-level room”, largely because that was all that was available and it seemed like a nice treat for our first vacation in 18 months. As it happened, a good chunk of the team was also on the same floor.

And so, the anecdotes:

When we got into the elevator at 11:30 on Saturday night after drinks with friends, we ran into coach Hans Backe and GM Erik Soler. We greeted them with warmth and excitement, and in their jetlagged (it was 2:30 AM ET) just-off-the-plane state, they seemed extra perplexed we had any idea who they were, and then shocked/pleased that we had flown so far to see them.

The next morning (the day of the game) I caught a few perplexed looks from Jan Gunnar Solli and Austin Da Luz, likely because I was in my away jersey. (The team seems to always be wearing at least one piece of team gear at any given time.)

While riding down the elevator to leave for the pub before the game, we ran into Shep Messing, who said he was very happy to see away support. As someone who often listens to him call games on MSG, I was just as happy to see him.

After the game, we opted to wait in the lobby with a few other fans, and gave them some applause when they came in off the bus. Hans recognized us and asked us if we were coming to the Seattle on Thursday; we got a lot of handshakes and high fives, as well as some zonked looks given that most of the guys had just ran around for two hours.

We returned to our room after everyone had gone up, but Katie had wanted to check to see if the club lounge was still open. We opened the door (we were in a little side-hall with three rooms) and were face to face with the training staff going into the room next to ours. Still in my jersey, there was a brief comedic pause. Then one of them said to the rest of the team “Hey, dumbass, be quiet, people are trying to sleep”, to which I could only quip “Oh, there’s no way we’re sleeping after that game.” As we turned the corner, Thierry Henry was speaking rapidly in Spanish at one of the team staff members as he headed towards his room. We quickly slid back into our room and marked out, just a little.

The next morning, we saw Thierry down in the atrium having brunch and looking surprisingly relaxed, given how the game ended. And later, in an emergency trip back to the hotel to grab something, I ran into John Rooney. He remains very quiet and soft spoken (as he has been the other times I’ve met him), so the entire exchange was “Good job last night, John.” “Thank you.”

That evening, we saw Greg Sutton, Carlos Mendes, and Carl Robinson sitting across the street drinking Starbucks – and they gave me a look of “We sort of recognize you but can’t remember why”. We also caught Roy Miller coming out of an elevator, and got a very surprised “Hello?!?” when we said hey.

So while our intentions were good in having a couple interactions with the team, it ended up being mostly comical. My apologies to any members of the team that we may have perplexed or otherwise confused as the two people in the hotel who knew exactly who they all were.