Most of the tech world knows that Verizon is having a press conference today to announce they would be offering the iPhone. What I didn’t expect was that AT&T would try their best to push me away just minutes before the event started.

For the 3.5 years I’ve been with AT&T, I’ve found their service to actually be rather tolerable – I haven’t had the dead zone horror stories you hear so often from people in NYC. What I did lament was the customer service – compared to the 24/7 love I got from T-Mobile (even when things got crappy in the end), AT&T just doesn’t seem to care.

Back in November, I received an auto-dialed voicemail out of the blue informing me that I needed to call AT&T Accounts Receivable *right away*. I checked my account, and mysteriously, I was past due. Why mysterious? Because I’ve been on auto-pay since the day I opened my AT&T account, and my credit card has been valid and good the entire time.

When I called up and explained to the rep that *no I didn’t cancel AutoPay*, and *no my credit card is still valid*, he seemed confused. When I helpfully suggested *hey how about you try running the charge again on the card you claim is cancelled*, he did – and it worked, to his astonishment. I asked for late fees to be waived, I asked for a note to be put on my account, and for my AutoPay to be reinstated. He obliged, but said AutoPay would take a month to re-activate. So I made sure to pay my bill normally, confirmed that AutoPay was listed as “ON”, and went on my way.

An aside: while I helpfully got a confirmation that my AutoPay enrollment was processed (with a confirmation code), the only notification I had gotten from AT&T that my payment couldn’t be processed was a phone call *after* I was past due. No text message the day after my payment was due, no email warning me they hadn’t seen any of my money, no letter. Just silence, until the late fee had been applied.
Another aside: to be fair to AT&T, I do also have some issues with this same card and some (not all) MTA Metrocard machines. But those are the only two vendors I’ve experienced this with.

So, today: at 10:45 AM, literally fifteen minutes before the Verizon press conference was starting, my phone rang. It was from an 800 number I didn’t recognize, and being in a meeting, I didn’t take it. But a quick Google search showed that it was an AT&T number, associated with bill paying. Logging into my account showed that I was, again, past due.

I raced back to my office and went through almost the exact same phone call I went through before. Same “autopay was canceled”, same “try running the same card”, same confusion when it worked. Same one cycle delay to get my autopay reinstated. I asked for a text message confirmation of my payment, and for late fees to again be waived, and again pleaded for notification if this were to happen again.
Just as my blood had lowered from boiling to simmering, I received three text messages: one confirming my payment, one confirming my autopay enrollment, and then this stunner: 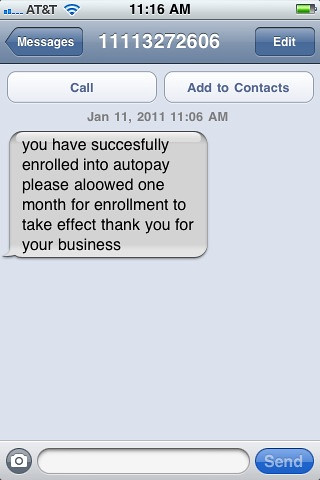 If I choose to use the services of a company, I ask for three things in exchange for my money:

For me, no one item in this list is weighted above the other – customer service and customer experience are just as important as the service itself.

So: when a company goes out of their way to make it difficult as possible for me to give them money? That’s stupid.
When a company sends out a poorly written text message to help resolve my case? That’s insulting.
When a company does all of this as their biggest competitor is announcing that they’re now offering the same product that my issues are relating to, thus providing competition?