If you rewind back to the end of 1997, Konami was beginning to lay the groundwork for rhythm gaming – the very first beatmania title was hitting the market. One of the founding musicians of the series would be found under multiple aliases – n.a.r.d., dj nagureo, Jam Master ’73, tiger YAMATO – and that was Reo Nagumo.

After beatmania IIDX 10th Style saw a release in 2004, Reo would only have one more song appear on a IIDX release (2007’s DistorteD), which he claimed in the Song Production Info would be his “final opus that will erase [his] past” and identified a sushi restaurant in the US as the reason for his retirement:

Oh, baby, I decided to retire with this track.
Um, I’m going to emigrate to America.
The reason is simple, I’ve found my calling,
Someone left me a sushi place. It’s getting big in America~

I got a fan letter that said:
“The first time I heard R3, I was in middle school.” Thank you. The kids have become adults.
The time for my retirement draws near. The old men should slowly fade away, so the young ones can take over.

You know, even on the eve of the 21st century, I was
Making you guys a track. It’s crazy.
Even when I busted up my Y31, I took out my sadness by making songs.
Thank you, everyone!
I guess I eventually got kinda cool. *tears*
The world really does revolve around you.
Well, it was fun.

But as I discovered today thanks to an inbound link from Finger Gaming, Reo is still doing what he’s always been doing – not running a sushi restaurant but instead a game company, called Yudo Ltd.. Yudo was actually established in March of 2003 according to their press release, and the company statement isn’t shy about Reo’s role in the founding of some Bemani titles:

Yudo created a trend in music-based games with titles such as beatmania and pop’n music, with experience that runs deep into the management level. Yudo was founded, and is currently helmed by, Reo Nagumo, who worked as a DJ under the moniker dj nagureo. The company continues to develop and produce games and music.

With a unique planning expertise, Yudo aims to offer revolutionarily new services and games throughout the world.

Yudo is very much a casual gaming company, focusing on the iPhone and WiiWare platforms. Many of their releases thus far have been $1 games (slogan: “1$-GAMES is ‘One’derful”), including Cutie Scratch, PiyoPiyo Panic, and SpyBugRadar, which perhaps makes more sense if you’ve seen the demo video. 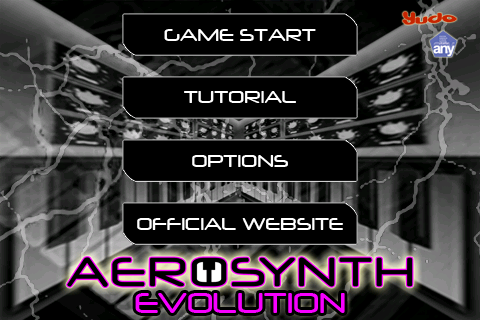 But of course, my admiration of Reo is for his musical output, and that’s where the Aero Series comes in. Much like the cartoon hierarchy is cat, mouse, dog, so too is the music game hierarchy: guitar, drum, synthesizer. Having heard through the grapevine that the guitar and drum versions were a bit crap, I splurged the $3 for Aero Synth Evolution. (I am unclear what the difference is between the Evolution version and the non-Evolution version.) 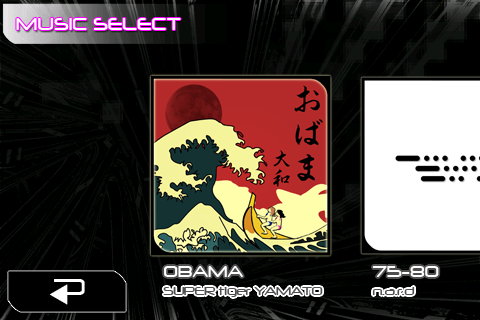 And immediately, the $3 was worth it: the first song on the Free mode song list is OBAMA by SUPER tiger YAMATO. (If nearly eight years of Bemani obsession has taught me anything, it’s to not question the strange capitalization of song titles or artists.)

Here’s a video of me playing it on Normal difficulty. I apologize in advance about the quality – it’s difficult to play a touch-based game while holding a camera:

(I should also point out that while Yudo has done an excellent job providing English interfaces into their software, it does suffer from the occasional Engrish – such as the “Dairy Rankings“.)

My expectations of most iPhone music games have been terribly low, so this came as a somewhat pleasant surprise. You can tap the notes anywhere along the same general horizontal plane as they are, so long as you hit it with the right timing – thus allowing you to avoid most issues with hand blockage. There’s also chords which will take some getting used to for me to be able to read them properly.

AeroSynth does hold the distinction of being the only iPhone rhythm game I’ve played that seems to really maintain it’s timing window (unlike DDR-S Lite) and not suffer from the occasional bouts of frame dropping (unlike Tap Tap Revolution).

The experience on a whole is not terribly deep – 2 modes, 6 songs, and 9 courses means it’s no DJ Max Technika – but for $3, I have no complaints. For those of you who don’t want to splurge, there’s a free version with a single song.

But that single song isn’t OBAMA.