Today, the second of what will be a three part series: The Week Of Awesome Food. 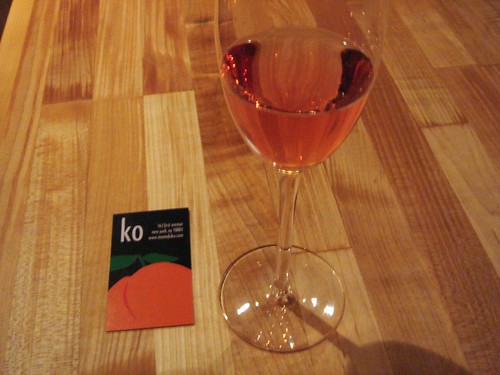 In many ways, the work of a critic is easy. We risk very little yet enjoy a position over those who offer up their work and their selves to our judgment. We thrive on negative criticism, which is fun to write and to read. But the bitter truth we critics must face, is that in the grand scheme of things, the average piece of junk is more meaningful than our criticism designating it so. But there are times when a critic truly risks something, and that is in the discovery and defense of the new. The world is often unkind to new talent, new creations, the new needs friends. Last night, I experienced something new, an extraordinary meal from a singularly unexpected source. To say that both the meal and its maker have challenged my preconceptions about fine cooking is a gross understatement.

“Are you fucking kidding me?“, you may be thinking. At least, I’m thinking it. Quoting Ratatouille? Am I high? (As it turns out, I am not.)

The NYC food scene is a deafening chaos, one that can easily baffle and frighten both tourists and townies. New restaurants can lead this chaos into a feedback loop, where hype creates more hype and long lines creates longer lines. The old example of this is my beloved Shake Shack (which then spawned a Shacklash); the newest example of this is Artichoke.

But there’s a catch. This loop can be created anew – or broken entirely – by one person with the penultimate power over restaurants in NYC. That person is the NY Times Food Critic, and at the current point in time, that person is Frank Bruni. Bruni publishes one review a week, which appears in the Wednesday edition of the paper. Eater has a regular feature, giving odds on how many stars a restaurant will get, called BruniBetting.

It was through BruniBetting — and not the hype circus — that I finally awakened to David Chang, master to all that is Momofuku. Upon discovering his second restaurant (Momofuku Ssam Bar) was getting a review from Bruni, he penned a piece for Eater laying out how he felt about the process:

The problem with guessing what he’d make of the restaurant is the problem that makes Ssam Bar good in my opinion: It is run by a bunch of cooks in dire need of Ritalin who cannot keep the restaurant focused. If it seems like a good idea to us, we try it. You can’t sort out why there’s a ten-pound pork shoulder on the menu next to a $9 Korean burrito. We just cook.

He also outlined the various responses the staff would take for each possible star:

If it’s a good two-star, expect to see amazing acts of drunken buffoonery on Tuesday night. Wednesday will not be the best time to eat at either Momofuku as both kitchen crews will be nursing major hangovers. Major.

David Chang is a terrific cook, a pork-loving, pickle-happy individualist whose integration of Asian flavors and his own unbound sense of what’s delectable makes for some deliriously enjoyable meals. At Momofuku Noodle Bar, which he opened in 2004, and at Momofuku Ssam Bar, which came along in 2006, he has proven himself one of this city’s brightest culinary talents.

For reasons beyond my comprehension, it would be just over ten months before I would finally make it to Momofuku Ssam Bar. Another four trips soon followed, as well as a long overdue visit to Momofuku Noodle Bar. But just as I was catching up to this hype train, a new one was getting ready for departure: the third restaurant in the dynasty, Momofuku Ko, was launching shortly.

I’ve made reference to it previously, but the reservation system at Ko will either strike you as “egalitarian” – in that it is truly fair, with no backdoor for VIPs – or “fucking insane”, because all the reservations opened on a given day tend to disappear within 30 seconds. Bruni has written about it three separate times.
By some strange fate, I ended up with a reservation for two for 10PM this past Thursday. So enough backstory – let’s talk about the meal. 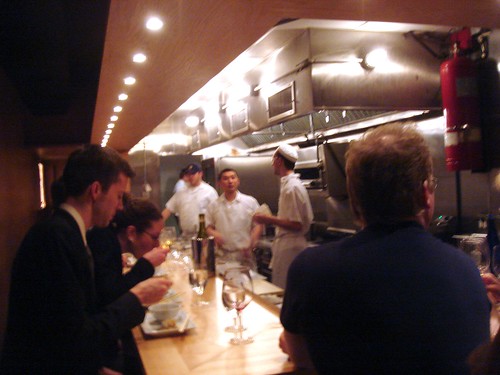 Ko is a long bar with about twelve seats on one side and a kitchen on the other. A small team of waitresses will help with place settings and beverages; the chefs serve the food after they finish cooking it. It would be hard to have a more direct or more intimate relationship with a restaurant; as Katie pointed out, it’s as close to a private kitchen experience as you may get.

There is no printed menu at Ko; $85 gets you around eight courses plus some smaller dishes. Your only real option is what to drink: besides a number of sakes and wines, there’s an alcohol pairing for $50 or $85, depending on what level of alcohol you want. Note that while it’s called a “wine pairing”, “alcohol pairing” is more accurate – over the course of the meal, we were collectively treated to two whites, one red, three sakes, one beer, one sherry, and one sparkling dessert wine.

This seems like an appropriate time to warn that the alcohol pairing is not something to just do without pre-meditating on, both for the health of your liver and for extenuating circumstances, such as “having work in the morning” and “living nowhere near the restaurant”. I’ve done it once, and once will be enough.

On to the food.

(not pictured) A fresh fried pork rind was the first small plate, which was surprisingly light for something deep fried and involving pork. This was quickly followed with a house-made english muffin with pork fat and chive. This was better than it had any right to be, and is the sort of english muffin I wish I could eat every morning. 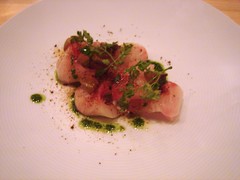 A sliced kampachi with muscat grapes was the first course, beautifully sliced and buttery smooth. 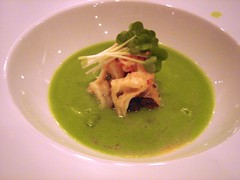 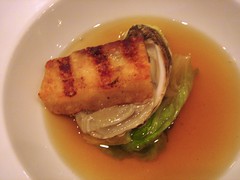 The first soup hit next, and we were given two different dishes. Katie got a sweet pea soup, with mushrooms and crawfish – not a pairing I would have expected, but (unsurprisingly) it worked. I was instead given the kimchi consommé with pork belly and oysters, and this Ko staple was easily in my top three for the night. The broth was salty and just the right level of spicy, while the pork and the oyster provided interesting texture for it to play off of. Utterly fantastic soup. 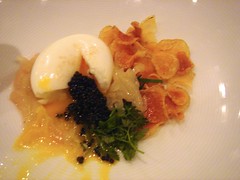 Next: A coddled hen’s egg (yes, yes, I know) with caviar, onions, wine vinegar, and potato chips. It’s not a stretch to say this single dish spanned more textures and flavors than most of my meals normally do.
(not pictured) At this point came a fried soft shell crab, with brown butter and Old Bay. This was the dish that was paired with the beer (it happened to be Budweiser, amusingly), and while I am not knowledgeable about the intricacies of crabbing, Katie’s Maryland side came out and was singing high praises of the dish. I defer to her judgement. 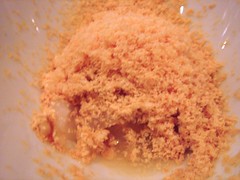 I knew this was coming, as another one of the now notorious dishes, but it’s still hard to fathom that this is shaved foie gras with lytchee and riesling. I am not one to order foie gras – not because of the ethics, but because I don’t particular enjoy the taste. But this – this was the sort of dish that changes your outlook on a food entirely. 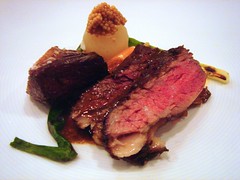 Out of the frier came this fried short rib, with daikon radish and pickled mustard. Meat appearing from a frier can be frightening – but with some lovely fat marbling and various pickled accompaniments, fear was not needed. Although I was starting to fear this meal would never end – I was losing track of the courses, getting mildly drunk, and I had no idea how many more dishes were going to be thrown at me. 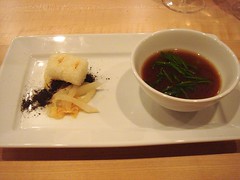 Fear resolved – the second soup course was flagged as the last savory course, and so I dug into this miso soup with grilled rice and pickled vegetables. As someone who always leaves his nori and tofu at the bottom of his miso, their non-appearance in this soup was welcome. Also: I love grilled rice balls with sea salt. This very simple dish was the perfect note to head to the sweet stuff with. 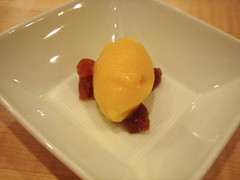 Sorbet course: pineapple sorbet, with chewy pineapple. Not pictured was Katie’s dish, a kiwi sorbet with olive oil and apricot. I am a sucker for quality sorbet, and a bigger sucker for pineapple – this dish was gone in sixty seconds. 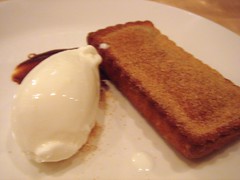 Finally, the dessert – a deep fried apple pie, with sour cream ice cream and toasted miso. Yes, like a McDonald’s Apple Pie. Just considerably better – fresh out of the fryer, with the right amount of liquid in the middle and paired with superb ice cream. Unfortunately, I was unable to complete this course due to the overwhelming fullness I was feeling.

The bill came, and we stumbled out onto 1st Ave and caught a cab home, knowing we were in trouble the next day, but loving it nonetheless.

The problem of the hype feedback loop I mentioned earlier is that we are not all alike, and the experiences of others may not be the one you have. When a meal fails to live up to the hype, your displeasure becomes amplified: you want to break the cycle of good buzz by inserting your horror story right in the middle, hoping to derail it all.

I certainly find those situations frustrating, but I find I’m more frustrated with this meal because it did live up to the astronomical levels of hype that I had been following. I got exactly what I had hoped for: a flawless meal. Hell, I got more: I got outstanding service from the waitstaff and a very fun, unique experience of sharing the restaurant with one other couple.

A friend asked me a few days ago how it was, and the best quantitative analysis I could give was this: the last truly upscale meal I had was at Eleven Madison Park. Both meals were delicious, and both meals had impeccable service. But Ko featured a more intimate experience, with food that pushed more creative boundaries, and also managed to come with a eclectic beverage pairing. And after tax and tip at both locations, Ko was exactly half the cost of that meal at Eleven Madison Park.

Like that fateful meal at the end of Ratatouille, I have had my preconceptions about what fine dining can be challenged by an unlikely source. I am left defending the new. I can say that Momofuku Ko lived up to the hype.
My meal at Ko is, to date, the best meal I’ve ever had.

(Momofuku Ko; 163 1st Ave., between 10th and 11th; take the L to 1st Ave. Reservations required, and taken a week in advance online only. Dinner service only.)