Today, the first of what (I assume) will be a three part series: The Week Of Awesome Food.

Northern Astoria – for nearly five years, I’ve called the area around the last stop on the N and W lines my home. If you push on further north, you’ll find the Steinway Piano factory, a Con Edison Power Plant (oh the sweet, sweet irony), and if you’re willing to swim, Rikers Island. We are the northwest edge of Queens, not dominated by any one particular ethnic group and what I like to refer to as the “quiet part of town”.

While there’s plenty of good food to be found on Steinway south of Astoria Blvd., those of us on the north side occasionally get stuck in a rut. Quick and cheap options are plentiful: hole-in-the-wall Asian, various forms of pizza, and assorted fast food. But the well executed restaurants are limited: an upscale steakhouse, a French bistro, a Greek tavern.

So today, I find myself dumbfound perusing the Time Out NY Eat Out Awards. A little French/Asian fusion spot called Bistro 33 wins the Reader’s Choice Award for Best Queens Restaurant. And it’s technically in my neighborhood – if you want to call over twenty blocks away “in my neighborhood”. Yet strangely, for a place that just won a fairly notable award, Yelp was pretty barren for reviews.

So after work, Katie and I made the trek from 31st St., down Ditmars Boulevard to the western edge of Astoria, and were the first for dinner at Bistro 33. As if I needed invocation to try more food, we were informed that Tuesdays and Wednesdays were “Two For Ten” night – most of the appetizers, the cocktails, and the sushi were 2 for $10.
Say no more. After we got our wine, the dishes started hitting. 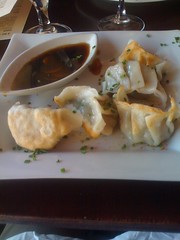 A plate of pork and scallion gyoza started me off, seared just the right way with a wrapper that didn’t give like so many other dumplings I’ve had lately. The competition wasn’t tough, but these were easily the best gyoza I’ve had in Astoria. 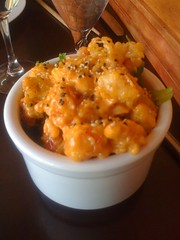 A bowl of tempura crawfish tossed in a spicy mayo gave me fond memories of the Cajun Popcorn at Maxie’s Supper Club. I quickly forgave the softening of the tempura by the mayo given the extremely generous serving of crawfish.

Not pictured: Katie ordered the Truffled Lobster Mac & Cheese. Why no picture? Because it was half gone by the time the two above pictures had been taken. A quickly shared bite made it obvious – big chunks of lobster, along with the right blend of cheese to not overwhelm it, make it hard not to plow through immediately. 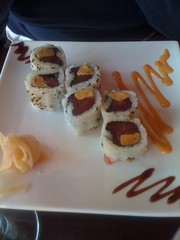 Katie’s choice of entree was obvious, a combination of her two great food loves: sushi and foie gras. While I had my doubts (and truth be told, I didn’t try it), after one bite she proclaimed that Bistro 33 was her new favorite restaurant. 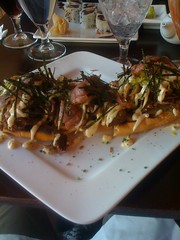 My entree may have also been seen as an obvious choice – it was merely labeled as “Pork”. But perhaps the description of the dish needs emphasizing: “Slow roasted Berkshire pork with crispy proscuitto, manchego cheese, shredded pickles, Dijon-soy mayo & julienne nori”. You’ll also note there’s some bread. The waitress, after seeing my eyes widen, patted me on the back and wished me luck.

I don’t like to admit defeat, but — I couldn’t finish it, solely because of the size. The flavor and texture were both spot on – the thing was just too big, and besides, I had been promised dessert. 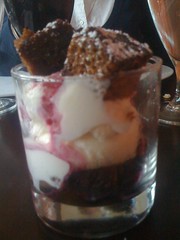 The specialty dessert, a gingerbread parfait, was matched with a lemony ice cream and tiny blueberries. I could not think of a better conclusion to the meal. 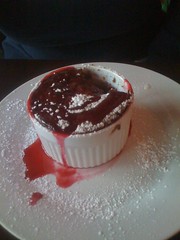 Katie opted for a chocolate soufflé matched with raspberry sauce. As she cracked the soufflé, I saw the steam rise off her spoon, and I didn’t need to taste it to know it had been done right. (That said, I did taste it anyhow. And it was.)

After being presented with a very modest bill given the amount we had ingested, I was faced with a comment card. I am not normally one to leap on a comment card, but I found myself digging into my bag for a pen and wrote, without even thinking about it, the only comment that could do the experience justice: *I feel like I’ve been doing myself a disservice by not coming here sooner.*

As we got up to leave, we were asked where we heard about the Time Out awards (thus marking the third time I’ve had to namecheck Eater in the last year), and I learned that their award (which is presented as a dish) was broken before they got it. On the way out, chef/owner Gary Anza gave us a big smile, thanked us, and asked if we’d be back tomorrow.

We said next week, but I’m not so sure I can hold out until then.