Today, the final chapter in The Week Of Awesome Food.

My mom emailed me on Monday morning:

> I guess your acquisition of GTA early explains your lack of a new blog! That says it all.

Truth be told, it wasn’t GTA4 that made this post take eight days. Nor was it the conference, the air travel, the weather, getting back to work, or any other activity. It was because I couldn’t quite find an angle to tackle it with – blogger’s block, I suppose. So to those that were waiting, my apologies.

Me: So I’m going to San Francisco at the end of April.
Friend: “Oh! Are you going to Chez Panisse?”

Twice within the same week, the same conversation occurred. Surely, it was a sign. 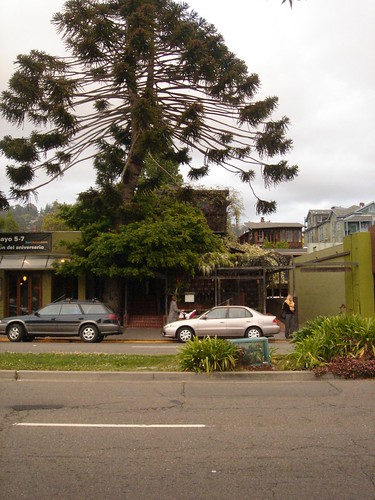 For nearly forty years, Alice Waters’ Chez Panisse has been setting the trend of greenmarket cooking. The hallmarks are familiar within modern dining culture: a constantly changing menu, with organic ingredients sourced from a local greenmarket. Chez Panisse is widely hailed as the birthplace of California cuisine, a place to stop along the restaurant history of America.

With enough lead time, my coworker and good friend Zach Szukala snagged a reservation for the Thuesday night of our trip to San Francisco for the Web 2.0 Expo. It was to be a celebration of food and drink, a high point on a trip that would otherwise be full of drinks and nibbles.

Or at least, that was the plan.

One of the problems with a place that changes the menu every night is that when this place is also somewhere that requires a long lead time on reservations, you’re inevitably going to be blindsided. The menu could contain nearly anything.

A pre-inspection of the menu cleared the immediate hazards off the list, and we opted for a split wine pairing for the three savory courses.

A quick aside: food photography leaves me conflicted. I’m obviously not against taking pictures of things I’ve eaten – it certainly makes documenting it easier – but at the same time, I strive to be non-obnoxious. By not shooting with flash and not taking multiple shots, I often am left with lesser quality shots. The following shots have been drastically color corrected, and may be a bit grainy.

Also: Zach has left his thoughts on the meal on the Flickr page for each photo, if you’re curious for a comparison of thoughts. 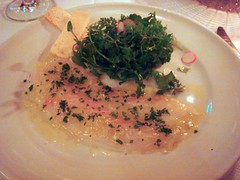 First out: this beautiful halibut carpaccio with lime, ginger, and sea salt, accompanied with some lettuces and crostini. While it was slightly tricky to manipulate – thicker than all other carpaccio dishes I’ve had, and slippery – it was a wonder to behold. Each bite got better and better – and the wine pairing was fantastic.

Surely, with a first course such as this, we were in for an incredible meal. 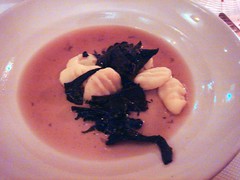 And then came the cursed gnocchi. More specifically, the cursed potato and green garlic gnocchi with black trumpet mushrooms.

I’m not clear why I’m having such a problem writing this paragraph. Is it because it feels like blastphemy to dare speak ill of such a beloved institution? Is it that I set myself up for this by being stupid enough to name a series of food posts “The Week Of Awesome Food”?

Whatever the reason, damn the torpedoes, full speed ahead: these gnocchi were possibly the worst thing I ate while in California. I should qualify that: while in San Francisco, I ate a meal at Denny’s. (Just saying.) The gnocchi were problematic in execution, not concept: they were mushy and flavorless. No hints of the garlic, no taste of the mushroom – they were just little mounds of mush.
Our view of the entire meal was thrown off. As we salvaged the remainder of the white wine, we began second guessing the kitchen, becoming hypercritical. We had let down our guard and paid the price. 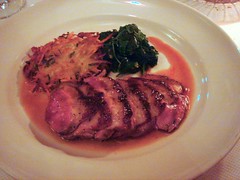 The last savory course emerged, a grilled duck breast in five spice sauce, with spring onion cake and spinach.
By all reasonable measures, the dish succeeded – the duck was flavorful and sauced just right. The spring onion cake was crispy and rich. The spinach was flavored with garlic and fennel, and was a great contrast to the meat. The red it was paired with was a good match.

But I found myself trying to pick things apart, looking for chinks in the armor. I ended up lamenting that the duck was a touch too fatty. 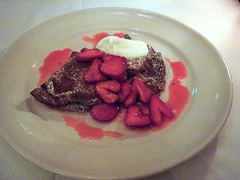 Finally, dessert, and one I was looking forward to: meyer lemon crepes with creme fraiche and strawberries. This simple dessert brought me back to a happy place – a well-made crepe with an crisp exterior and a bit of give in the middle, bursting with lemon flavor.

We finished the meal off with a coffee and an iced green tea, divided up the bill, and trekked back to the BART – where we promptly got on the wrong train and ended up near the Oakland airport before turning around right before the end of service.

So here’s the quandary: we had three good-to-excellent courses. Wine pairings were excellent, service was good, atmosphere was appropriate. The cost was a little steep for a four-course meal with wine, but I left the restaurant feeling satisfied and not particularly upset.

But my mind keeps coming back to the cursed gnocchi.

I’m not convinced that it’s fair to hold one failed dish against a restaurant, enough to taint the rest of your experience. The chef may have been having an off night, or just lost track of the cooking process for a moment. I want to believe that it was a fluke dish.
In the end, I consider the trip to Chez Panisse an important reminder about tolerance and consistency. The food obsessed are quick to snap judgment and eager to amplify both the highs and lows. But: not every dish will come out perfect. Not every service can be polite and prompt. Not every bill will seem reasonable.

Not every meal can be the Best Meal You’ve Ever Had.

Chez Panisse has certainly stood the test of time. The length that Alice has been in business is an eternity in the restaurant business. It’s hard to say much about the consistency of the place from a single visit, but I can only assume that a place that’s coming up on forty years may be the very definition of consistency.

So with all that said, Chez Panisse is OK by me, and is certainly worth a stop as a landmark in the dining scene. (Just watch out for the gnocchi.)