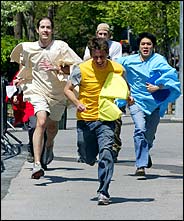 Today, we went to PacManhattan. By “we”, I mean myself, Katie, Don, and Jenn.

We left the apartment around 11:40, and exited the N-line at 8th Street around 12:30, heading west towards Washington Square. We crossed Mercer and entered the game zone. Here is the map for reference for the rest of the post.

At this point we are at A6 and carefully watching for signs of ghosts and/or Pac Man, knowing that we needed to make our way to B3 to be at the ghost respawn point. We walk to A5, A4, and then B4, all looking over shoulders for the guy with the yellow wedges on his chest.

As we’re going from A4->B4, I see Blinky (red ghost, played by an asian male) walking ahead of us, back to the respawn point. I try to point this out but no one seems to notice him until we make it to B4, at which point we see Clyde (white ghost in this case, asian female) coming towards us and talking vividly on her cell phone to her general. She walks by us and we keep heading towards B3.

At B3, we find Blinky resting with at least 3 people filming him. This seems oddly funny, and we stay out of the way. We stand under the giant arc in Washington Square and watch Pinky (pink ghost, caucasian female) go A3->B3->B4 on the other side of the street. She looks lost. A guy who is in the same portion of the square there to register people to vote asks what the hell is going on, and Katie explains.

We decide to go to the middle of the park, both in hopes of catching glimpses of commotion from afar, as well as watching an at-the-time more interesting magic act. Gerrit calls me, and reveals he is still at the park (we had made plans to meet but they were iffy), and we calibrate and find each other. He is in grunge clothing due to a casting call – no leather pants. We catch up and he reveals he hadn’t seen anything at all yet. We resolve to wander back over to the arc and follow the next ghost we see.

Sadly, the next ghost we see is again Pinky, still looking lost. We let her get a half block lead and then begin to follow her, but she keeps looking back over her shoulder wondering if people are following her. When she gets to B4, she stops at the corner, crosses the intersection to the southeast corner, and just stops dead – the poor girl seems really lost. We stand on the southwest corner, unsure of what to do.

Behold! From C3 coming our direction comes Inky (blue ghost, caucasian male). He seems to be walking much more quickly than the other ghosts, which would tend to indicate that he’s on a mission. We let him cross B4 towards A4, and subconciously we join into a walking group with two other guys following the action. By the time we get halfway between A4 and B4, Inky has turned the corner to the west.

And then, it happens. The moment in a social activity where it stops being just casual fun and suddenly turns deadly serious – and fun.

We hear a yell. Running east across A4 we see Pac Man. Followed by a seemingly professional camera crew. Then Inky. Then another camera crew.

Without any discussion, we all begin to run up the east side of University St. We are tearing ass around the corner, strafing to avoid pedestrians, flying through a group of important looking people standing outside a restaurant. Restraint is gone, and we are just tearing up the concrete.

Gerrit, Jenn, and Don get ahead of us so that as we see Pac Man hit A6 and start to head south, they’re halfway between A5 and A6, and we’re just at A5. I decide to start calling tactics of my own, and yell for Katie to follow me south to B5. We speed walk down there, and suddenly it’s quiet again.

We get to B5, and a glance east shows no movement. Did we lose them? I get out my SideKick, ready to call for positioning info, when I see PacMan come around B6 and heading west towards me. He’s not running, and Inky is not on his tail. Perhaps a power pellet was used, I think. Katie snaps a picture of Pac Man with her phone as he’s crossing towards us.

Suddenly, my mind flashes – isn’t Pinky camped out at B4? I look, I don’t see her. Is she still there, around the corner? Has she moved on? Do I pass this hot tip to Pac Man? Will I unfairly balance the game? Will I be thrown in gamer’s jail for hot insider tips? I decide to keep my mouth shut and wait for Jenn/Don/Gerrit. Gerrit mentions a controversy with Inky, and I see him coming down the opposite sidewalk, camera crew in tow, looking pissed off but still giving an interview. (The point of contention was that Inky had a perfect stealth setup to nab Pac Man, but was blocked by the camera crew – the same camera crew that was interviewing him.)

Then from around the corner, I hear a yell. I hear cheering. We race up to the corner, and Pinky has tagged out Pac Man. All the ghosts meet up, and a small crowd forms. I get the impression that only half of us had any idea what was going on. The players give a little wrap-up interview, there’s applause, and mention that the next game will begin in 10 minutes.

Jenn fulfills her promise from the subway in, and corners Pac Man immediately after the crowd breaks up. She gets an autograph on a dollar bill (the guy signed it “Pac Man”) and a hug. We decide to head off for lunch, as the running and adrenaline high has made us hungry.

I don’t think my words can capture how fun this was. The anxiousness, the sudden break and sprint, the implications of all of this with game theory and how the game is being played – needless to say, this was the most silly fun I’ve had in Manhattan to date. I look forward to going back every Saturday I can, and hope to someday compete, although I am probably not in shape for it right now. I eagerly recommend that if you’re in Manhattan, or the surrounding boroughs, or can make it into Manhattan from the tri-state area, you do at least once. This is something that everyone who’s every loved video games should experience.