The first significant pack-in with a video game system was the Atari 2600’s Combat. 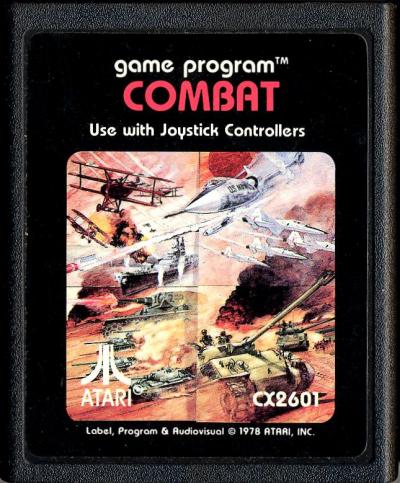 Combat is fairly ugly, and has simplistic gameplay. You are a tank (or biplane, or jet). Pressing Up on the joystick moves you forward; pressing Down moves you back; Left and Right turn. The Fire button lives up to its name and fires your cannon. The goal: shoot your opponent before they shoot you.

What made Combat interesting is that it wasn’t merely one game type – which it easily could have been, given the space constraints of the time. Instead, by making slight variations to the rules of the world, Atari crammed twenty-seven different game types in. A mode where bullets reflected off walls, or you had more than one vehicle, or you couldn’t see the walls.

Combat allowed deep variation through slight changes to the environment.

Nearly thirty years later, we arrive at yesterday’s release of PixelJunk Racers, a $6.99 downloadable game on the Playstation Network from PixelJunk.

In a generation full of gorgeous games, PixelJunk Racers is not the prettiest game in the world. IGN dismissed the graphics as “crisp, but unfortunately the backgrounds are horribly bland and static.”

PJR, like *Combat*, has simplistic controls. You are a car. L2 or R2 are the gas. Left and right on the directional pad change lanes. That’s literally it. Most people will pick it up in about thirty seconds.

PJR becomes interesting for the same reason Combat is: slight changes to the environment provide endless gameplay variations. The game features thirty-two game types that are all created through slight variations to the rules and physics. You’re fast, everyone else is slow – pass as many cars as you can. You’re slow, everyone else is faster – don’t get hit. You’re fast, but slowing down – run into someone else for another energy boost. And so on.

Plenty of games offer customization; it’s easy to give a gamer a bunch of sliders and controls and let the gamers figure them out. Combining these rules in interesting ways should be a challenge for the developers first, and the gamers second. Too many games cop-out and provide laundry lists of options. Developers should strive to provide many varied preset combinations of rules – and if you allow users to define their own, let those combinations be saved and, even better, shared between users.

(PJR, interesting, not only combines the rules of the world into different pre-defined game types, but then combines the different gametypes into sets of three to create pre-defined party modes. Result: party games that stay fresher longer.)

Back to PJR: the game is addictive, challenging, and flat-out fun. Yes, ultimately the mechanics are simple. Yes, the game is made up of slot cars. But isn’t that what we’re all supposed to be into these days – simple, easy to pick-up games? Casual games? PJR finds the balance between the simplistic and the complicated, the shallow and the deep, the meh and the addictive. It can appeal to the hardcore gamer who loves to grind high scores as well as the casual gamer who just wants a quick five minute distraction.

With ten tracks, offline multiplayer for up to seven, online leaderboards, and a progressive tournament mode, you’re looking at a pretty robust game for a very small cost. I highly recommend PixelJunk Racers for anyone with a PS3.

If you’re interested in other deep-variation-through-slight-change games, I invite you to investigate the Halo series (specifically the multiplayer), Airburst Extreme (for variations on a theme), and MLB 07 The Show (the “My Sliders” feature).