In a year we could not escape, a game about escaping.

Like so many others this year, I spent chunks of it trying to break my way out of hell. Supergiant’s Hades is the easiest game metaphor for 2020.

I have been no stranger to roguelikes over the years, so the run-die-learn-upgrade cycle of Hades fits like a glove. Struggling to cut a path through the four levels of the Underworld, that familiar sting of learning through failure was intoxicating.

Supergiant — previously of Bastion — continues to excel at every dimension of game design. Gorgeous graphics, another spectacular Darren Korb soundtrack, balanced mechanics, smooth gameplay. This high quality is almost a base level expectation of Supergiant now, so let me praise what came as a surprise:

First, a downright intimidating amount of voice acting. A run-based game should invite repetition, but through my 40+ escape attempts I haven’t heard a single bit of repeated dialog.

Second, I am appreciative of their commitment to scalable and managable difficulty. I was at risk of bouncing off the game entirely after 20 failed runs, so I opted to enable GOD MODE. The game didn’t shame me, didn’t disable my ability to earn progression, and didn’t even make me invincible – just gave me a little bit of an extra boost for each failure. The lack of judgment kept me going, and now I find myself grinding “heat”, a configurable difficulty system to keep later runs entertaining.

Last, I am genuinely impressed they found a way to wrap the run-centric nature of the game into the story itself, allowing for a unique narrative and a clever game loop to develop.

It’s as refined a game as you’ll find in 2020. If only that were enough to top my list this year. But it was a tough year.

Hades is available on PC and Switch. I clocked about 30 hours in the PC version. 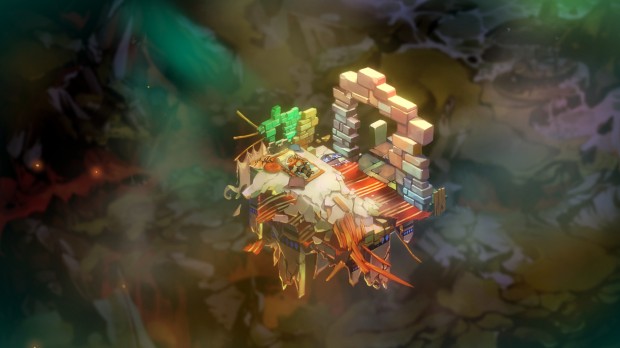 Sometimes it’s difficult to know whether or not you’re going to love a game. Ain’t so hard with this one. I knew within five minutes.

Supergiant Games’ debut title, Bastion, is extraordinary by every measure.

The art style: lush and meticulously drawn watercolors gives the many worlds of Caelondia a unique feel and personality. It’s not just the art, but also the animation, as many of the worlds within Bastion are either forming or disintegrating before your eyes.

The gameplay: Bastion is a well refined twin-stick action RPG. Multiple weapons, skills, and abilities allow you to adapt to your play style. The combat is not quite twitch combat, but certainly not slow by any stretch – it feels real and substantive.

The voicework: Logan Cunningham’s voice work as Rucks, the narrator, is unforgettable. Not just his voice, or the style in which he tells the story as you play through it, but the multiple versions of each line recorded, ensuring that even the slightest change in attack plans is accompanied by an appropriate monologue.

The music: Darren Korb’s beautiful, haunting soundtrack rounds out the performance, and is easily the most memorable soundtrack I’ve come across in years. I’ve embedded two tracks below to show the range of what Darren called “acoustic frontier trip-hop”:

This is a game that oozes love from every pore, and yet they chose to release it at a $15 price point via digital channels. If youve been reluctant to download games – if you’re the sort of person who only shops at Gamestop – Bastion is the game that will change your mind.

Do not miss this game, under any circumstances.

Bastion is available on Xbox Live Arcade, Windows, and somehow also through Chrome.