There are a handful of events in life that are so enjoyable, you can only write about it in the hopes that everyone else will get a chance to try it. This was one of those events. 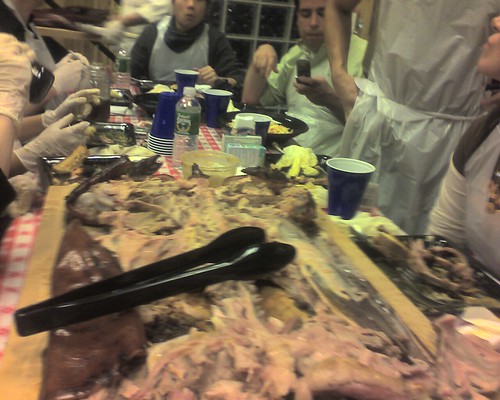 Friday night, we took part in the [Big Pig Gig](http://www.daisymaysbbq.com/bigpig.html) at Daisy May’s BBQ. [Tien](http://www.tienmao.com/) was the organizer and ringleader; the crowd was predominantly *bloggy*.

The meal we had ordered consisted of both the whole pig as well as a whole pork butt, six sides, texas toast, and watermelon. Even with eighteen people there, this was a lot of food. No one left in a state resembling “hungry”.

As for the food: If you enjoy barbecue, you must do this at least once in your life. Hand-pulling the steaming hot meat right off the pig – dredging it in sea salt or a mustard-based sauce, or just downing it straight – is satisfying in ways I didn’t think was possible. (Unfortunately, the skin was absurdly chewy. Despite its deliciousness, it’s requires a little too much effort to eat.) The sides were heavenly: baked beans that almost resembled a chili, given the amount of pork; perfect mashed potatoes; a deliciously zingy coleslaw.

I recommend sitting close to the pig, as I had the chance to do – it’s quite pleasant to randomly pick off pieces of meat from different areas. Meg kept exclaiming “Ooh, there’s more meat *here*!” from the opposite side, so I am not alone in the excitement of pork discovery.

Daisy May’s does, of course, have a [regular menu](http://www.daisymaysbbq.com/menus.html) too, so don’t think you have to show up and just get a giant pig. I will have to test their promises of delivering to anywhere in Manhattan one of these days.

From others that were there: