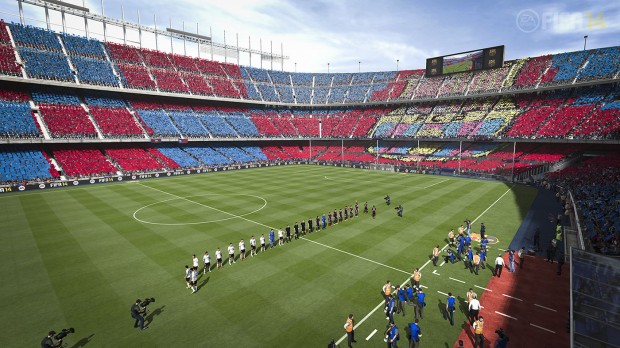 It’s sort of an annual tradition at this point that I’m posting something about FIFA during this series of posts. It’s hard to not – FIFA is, for better or worse, the only series that marries my two major hobbies into some sort of weird parallel world.

It’s where I spent something like 250 games (admittedly in FIFA 13) constantly battling against DCist soccer editor Pablo Maurer, finding every interesting permutation and rivalry we could manage to fight through season after season of online friendlies.

It’s where I found myself at the FIFA 14 launch party, focusing on the game instead of numerous hired dancers in MLS jerseys that were strangely dancing with towels. It’s the moment where Tim Cahill (yes, that Tim Cahill) came over and gave the group of local RBNY reports some handshakes and remarked how he was worried about his marquee match against Drake (yes, that Drake) because he had been practicing on the PS3 and the event only had Xboxes. Just ponder that for a second: one of the most famous footballers from Australia is worried about being able to adapt to a different controller. (P.S.: Cahill won.)

It’s where I finally found my way into Believe FC, the NeoGAF virtual club, where fine European gents nicknamed Cola and Quiche and Bacon (not sure why they’re all food) battle tirelessly for cups and promotion. It’s so riotously fun, that even when a 5-2 lead turns into a 7-6 loss and the entire group practically ragequits, everyone’s still back at it the next day having another go.

EA Sports FIFA is a gaming institution. And while 14 suffers from spanning a console generation (last-gen feels about the same as 13, next-gen is rough around the edges), it’s still required playing for anyone who likes sports and video games.