If it’s not already painfully clear to my friends, I love anecdotes. I love minutiae and trivia and obscure statistics. And I think that’s a big part of why I’ve taken to this whole sports journalism thing as a hobby: soccer is full of metrics (that are often meaningless), and every game I cover gives you a moment or two to hang on to longer term.

Take Thierry Henry. Thierry has won practically everything there is to win in the sport: Premier League, Champions League, World Cup. He is an intense competitor, and more than a little prickly in the locker room. So much so that I’ve only ever asked him two questions in the 18 months I’ve been “on the beat”, the last of which earned me a mild bollocking which included the phrase “I don’t know if you know what it’s like to play in a pre-season friendly”. (No, Titi, I don’t, but thanks for asking.) Even getting sassed at by Thierry is a fun memory, not a point of shame.

Sometimes, though, you don’t know an anecdote is happening until 9 months later. And that happened to me recently thanks to one Tim Cahill, although it wasn’t intentional on his part.

Cahill joined the team a year ago today in what was a bit of a shock move, leaving Everton where he was essentially an idol. But from the moment he stepped into the NY locker room, he became a great presence – funny, verbose, dedicated, and honest. In a sport where a lot of guys can’t interview or don’t want to deal with the press, Tim quickly achieved a level of what I would describe as “mutual respect” with the beat reporters. (Let’s leave the Muppet incident aside.)

As every Metro/RBNY season seems to go, the team would fall out of the post-season quickly. In a return match against DC United, the series could’ve been won had Cahill and Henry not encroached on a penalty kick in the second half. Kenny Cooper retook it, had his shot saved, and then things started to fall apart, leading DC to score and NY to be eliminated. I wrote at the time:

A few despondent Red Bulls applaud the fans who hadn’t already fled Harrison, but most retreat to the locker room morosely. The sight of Kenny Cooper crying in a locker and being consoled by Thierry Henry drove home the disappointment and frustration over another wasted campaign.

As most of the media reported that night, Cooper wouldn’t speak to the media – and no one can blame him, although the missed penalty kick certainly wasn’t his fault. Cahill said as much that night when he was the first player who opted to do interviews: why would anyone need to talk to Kenny? We all know how he felt. We could see it.

Fast forward to June. MLS, who struggles for media coverage on a regular basis, announced they were setting up a new media house to create original programming, the first of which was dubbed “MLS Insider”. Bringing in Jonathan Hock who worked on ESPN’s 30 For 30, it involved short documentary pieces. It all sounded very cool – but I was thrown slightly when I spotted myself standing behind Tim Cahill in some of the promo footage the league was pushing about the series. I had trouble figuring out the context (as there wasn’t audio), but I did notice that I had a pretty full beard at the time. 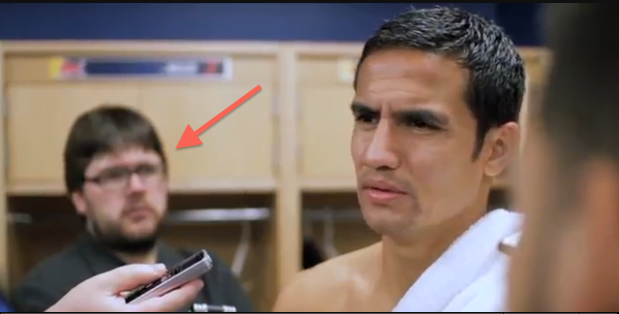 Late June, the first episode aired, and the very first segment was one on Tim Cahill. It was very well done, talking about his reasons for coming to MLS, and his experiences, and his childhood – highly recommended.

In the middle of the segment, the piece rewinds back to that playoff game. Cahill talks about encroachment and the loss – and then the scene in the locker room:

The press want to speak to Kenny. But they want to bombard him – there’s probably about 30 people waiting to ask him how he feels. No offense – but it doesn’t take a rocket scientist to understand the way Kenny feels. I told the press, you’re not interviewing Kenny – and I’ll take the rap for it.

And as the camera cuts to the locker room, I suddenly realize why that beard looked so familiar. It was my “playoff” beard. And then I cringed, as Cahill serves as hero to the bullying media scrum around him – faceless all except for my dumb ass standing in the background. While media being over shoulder during player interviews is fairly common, it doesn’t normally happen after the player has just finished telling the camera what dicks the media were being.

You can watch the full segment below; the bit in question is at 3:44 in:

Depending on events that happen during this transfer window, I may get one back over on Tim – but that’s a story for another day.