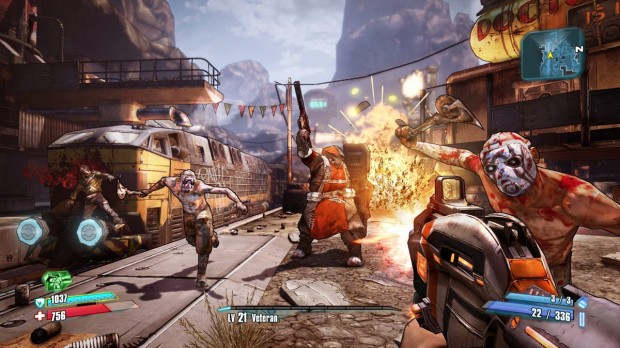 Has it really been three years since the original release of Borderlands? When I dug back to find [whatever I had written about it](https://vjarmy.com/archives/2009/12/steam_holiday_sale_2009_recommen.php) (“the best role playing/first person hybrid since Deus Ex, perhaps”), I was a bit surprised to see a 2009 on those posts.

That reaction is probably my expectations of the gaming industry. We’re in an era where any title that shows reasonable sales success is almost immediately announced for a sequel. Popular franchises are boiled down into a fine slurry that’s slopped out the door as quickly as possible year after year. How did Borderlands, which was both a critical and commercial success, manage to get a multi-year development cycle for its first sequel? It just seems beyond belief.

However it happened, it was worth it. I think out of all of the big budget “AAA” titles I’ve played this year (which admittedly wasn’t a ton), it was the one that felt the most realized, complete, and fun. The game world is huge, the combat feels satisfying, the writing remains sharp. The little annoyances and quibbles from the first game (like the decision to use Gamespy for online functions) are largely eradicated. And the pacing feels just about right – you can get lost in side quests if that’s your thing, or you can just grind away at the main storyline. It just feels so well balanced that I’m really glad it wasn’t rushed out the door under a tighter deadline.

One thing that Gearbox absolutely nailed was a feature they dubbed “Badass Rank”. Dedicated Borderlands players will likely end up with a stable of characters, one for each class in the game. The Badass Rank system provides general milestone objectives, which gradually convert into tokens. The tokens are redeemable for perks that boost stats for all of your characters, not just the one you’ve earned the points with. It’s a really smart method to reward the player for dedicated play. I hope other games won’t be afraid to steal it – it may be my favorite innovation I’ve seen in a game this year.

Actually, let me take that a step farther: I’m surprised that no one has tried to rip off Borderlands wholesale yet. And why *are* there so few quality first-person RPG franchises? Deus Ex, Elder Scrolls, Fallout (although New Vegas was a letdown), Borderlands…what else is there? You could argue to include Dead Island in there, even though the first game was rough around the edges. It just strikes me odd that for an industry that’s generally quick to flood the market with clones, there aren’t more first-person RPGs.

Maybe it’s a budget and time constraint – making a sufficiently deep game takes energy most companies don’t have. If that means that titles like Borderlands 2 are that much more unique, perhaps I shouldn’t be complaining too loudly.

Borderlands 2 is available for the Playstation 3, Xbox 360, Windows and OS X. My experiences were with the PC version.