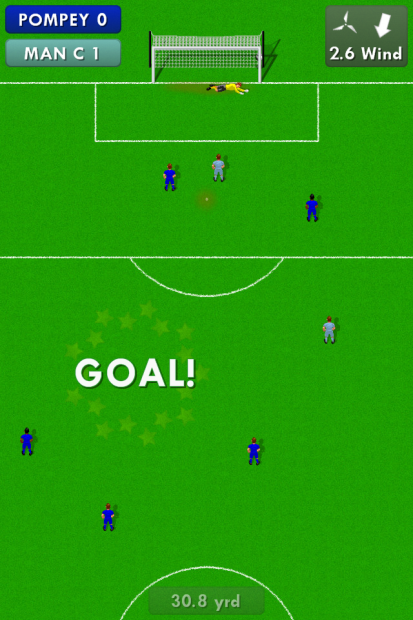 There’s something strangely attractive about sport RPG games. Pushing through a career of a pro athlete from minor league rookie to a world champion naturally lines up with RPG gameplay. It doesn’t need an elaborate story with revenge plots and the end of the world – there is enough drama that naturally comes from the competition. While the archetype soccer RPG experience is FIFA career mode (which [I struggled with last year](https://vjarmy.com/archives/2011/12/games-of-2011-fifa-12.php)), I have to point out how much silly fun New Star Soccer provides for a fraction of the cost.

It’s best to think of NSS as two parts: the matches themselves, and everything else. To that end: the matches are reminiscent of MLB: The Show‘s career mode, in that you’ll only be in control of the action when your player is actually involved in the play. You’ll patiently watch the clock tick by until a message about you getting the ball pops up, and then you’ll usually get a simplified overhead view of the field. Dragging on the screen sets the direction of your kick, and sends you into the reaction test. A soccer ball will fly through your view, or bounce off the ground, or otherwise move around you. Tap the ball and based on a variety of factors (where you tap, how high off the ball it is, how far you dragged when you set your direction), off the ball goes. What happens then really isn’t up to you – passes can get intercepted, shots can ricochet off the bar. You’ll generally only get about 5-8 touches of the ball per game, so make those chances count.

Games can fly by pretty quickly. The rest of your time will be spent in the menus dealing with the rest of your life. You have five relationships to manage – your boss, your team, the fans, your girlfriend (if you’ve managed to get one), and your sponsors. You also have five stats (pace, power, technique, vision, and free kicks) that directly effect the matches. Now you can play a minigame to keep your relationships happy or increase your stats – but they cost energy, which can be replenished with energy drinks. Drain all your energy and you’ll be left on the bench.

The meta-game in NSS is the fight to balance this cycle. Upgrade your stats so you play better and people are happy; play better to earn more money; use the money to buy items that replenish your energy better; use your energy to squeeze in more upgrades. It’s a precarious cycle – have a bad game, and you might not have the money you need to refill your energy to keep your fans happy, who won’t hesitate to boo you if they feel poorly about you. It can be crushing to miss one shot on goal and have that lead to you not seeing the field for weeks, but that’s not too far from how the world actually works.

There’s a bit of chance that creeps into the game as well with random events between games. A newspaper might say you look dumb, sapping your morale. Your girlfriend might ask to borrow your car – maybe she crashes it and ruins most of your relationships, or maybe she doesn’t. You can get told you’re being traded to a lower division team, which is terribly insulting when you’re leading the league in scoring.

Eventually, you can find a way out of the upgrade/relationship cycle. The sponsors start to come knocking, and the bonus cash rolls in. You get a bit better at the minigames, and the stat raises come easier. The relationships stop being in competition with each other and you just start rolling. You can start to buy up all the property and accessories. You’ll start hoarding the energy drinks, and then eventually you won’t even need them. You’ll win domestic titles, continental titles, maybe even a world one with your national team.

NSS probably needs an addiction warning on startup; it can be a short enough experience that you can pick it up and knock off a match in a minute or two, but you can also keep winding through seasons that hours can melt away in a play session. Even after you’ve seemingly mastered the game, you’ll still feel the urge to keep taking the field.

Now if you’ll excuse me, I need to go. My team needs me.

New Star Soccer is available for iOS and Android. On iOS, the game is free but career mode is an in-app purchase of $1. There’s also a more complicated PC/Mac version, but I haven’t spent any real time with it – yet.