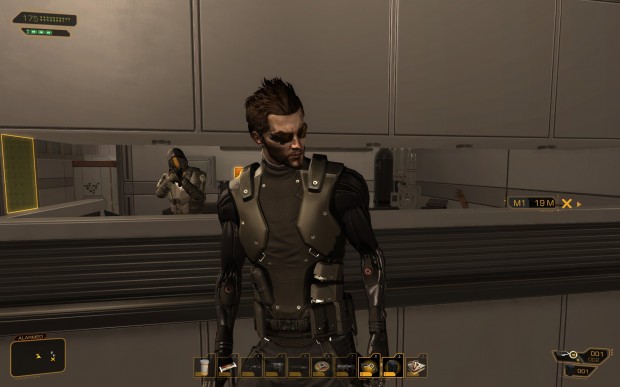 The original Deus Ex hit the market in 2000, and it was a revolution unto itself. It combined the first person shooter with role playing elements and strong writing. It offered the player real choice and branching story lines. Adversity could be worked around, fights could be diffused peacefully. The game brought with it an implied promise: first person games didn’t need to adhere to a formula.

Sadly, that promise wasn’t met. The 2003 sequel Invisible War was garbage, the franchise was shelved, and few developers wanted to try and replicate the Deus Ex experience.

But like other historic franchises, this was finally the year that Deus Ex was booted back up. After four years in development, Deus Ex: Human Revolution was released in August. From the moment I touched the game, I felt that familiar rush again. The stealth, the conversations, the gunplay, the lock picking, it was all just so brilliant. I started to mentally mark it down as a clear frontrunner for the best game I played that year.

Then I hit a boss battle, and those thoughts evaporated.

Much has been said by press and players alike about how out of place the boss battles felt. This is a game where you can specialize in stealth and subterfuge, building your character so that you can slink through each level without killing a single enemy guard. And yet this same game forces you into a guns-blazing do-or-die battle with an overpowered enemy. Players who went in with stealth-heavy builds were severely disadvantaged in these fights.

Player choice is a dangerous tool to wield. For every dimension of character construction you allow, you open yourself up to players working themselves into a position where it is difficult to advance. Regular adversity isn’t a problem – players need a challenge, and there shouldn’t be a build you can just blow through the game with. But games should never make it practically impossible for standard builds to advance, and sadly, that’s what the boss fights in DX:HR did.

Eidos admitted a month after release that they had outsourced the boss battles to another company, one that “didn’t know much about the Deus Ex world before the project began.” What a statement that is: to not only add gameplay that people generally disliked, but to farm it outside of the core team working on the game, to people who didn’t understand the history or vision for the game.

Developers, remember this: make the best games you can. Don’t compromise. And don’t add boss battles if they don’t fit into your game.