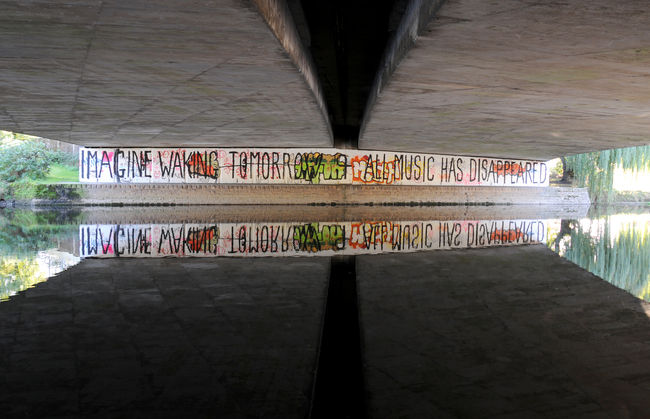 Let me begin by stating that I don’t expect this to make much sense to anyone other than myself.

In 2004, Bill Drummond (he of the Justified Ancients of Mu Mu and the KLF, previously discussed) took years of consideration of the state of music and began a project called the17. It began with a notice:

(Regular readers may note the commonality of the final two lines of the notice with the quote that adorns this site as a byline.)

Bill’s idea is that because of advancement like Napster and iPods, the concept of recorded music is essentially finished. The17 strives to move beyond recorded music:

I imagined what The17 could be in this new dawn where recorded music belonged to a bygone era. The17 may be restricted to using only the untrained human voice but in another sense it is totally free to make music anywhere, with anybody.

“But what *is* it?” you ask. At the core, The17 involves executing a written score – but instead of musical notes, the directions are in text. Most (but not all) scores involve seventeen people. Most (but not all) involve recording sound and then deleting it after playback to those who created it.

The rules, from the Second Notice:

There is an accompanying book, released in 2008, that describes Bill’s travels pursuing this idea.

Why I bring this all up now: while writing some details about the site, I was reminded of the17 because of the byline. Upon visiting the site, I was happy to see that news has continued to be posted, that Bill is still actively pursuing this.

And suddenly, I was reminded that in 2009, I submitted a score to the site via email, but had never heard anything back. I dug through the scores listed as “submitted by the individual members of the17”, and there it was, score 334, “Share”:

(I have also been credited with Score 333, but I don’t have any record of submitting it, so it may have been in error.)

To some, an art project like this may seem like madness, stupidity, or at best a waste of time — but I am touched to have had my submission accepted by someone I hold in such high regard.