“12 years too late,” I think to myself as I wait at the intersection of Church and Vesey, fake brass horns and breakbeats burning on my headphones.

“This song shouldn’t have any meaning in 2009,” my inner monologue went on as I waited for the third Lexington express train at Fulton Street as a choir sings portions of “Eternal Father, Strong to Save” over swelling strings.

But as I came up out of the underground by my office, and the same track still playing, my lips could not keep still when the refrain came around once more:

Fuck the millenium – we want it now.

> Be ready to ride the big dipper of the mixed metaphor. Be ready to dip your hands in the lucky bag of life, gather the storm clouds of fantasy and anoint your own genius.

I have been thinking a lot lately about Bill Drummond & Jimmy Cauty.

“Lately” may be a half-lie. I have been torturing my friends and family with this interest for the last few years, much to their lack of understanding and my inability to explain. But it’s intensified recently, capturing my spare thoughts and infecting my playlists, progressively driving me towards writing. Writing this post may allow me to put most of this to bed.

It could be perceived that there is no more appropriate day to finish this post – writing about the two most renown jackasses of the early 90’s on Internet Jackass day. Like many things in life, this was not intentional. This has been a long time coming.

> Now, we all know that pop music is not going to save the world but it does, undeniably, create a filing system for the memory banks. In years to come people will stagger home down lonely streets singing your song to the strains of regurgitated vindaloo, all memory of who was behind the song lost.

The twelve year old version of me went out of his way to nag his parents to buy what was the coolest album he knew of: MTV’s Party To Go Volume 2. Practically a early 90’s middle school dance in a box, I already knew and loved nearly every track – the Boyz 2 Men, the ABC, the PM Dawn. It was heaven for someone who had shit taste in music, but at that age I am able to forgive myself.

But the last track was unusual in both genre and content, foreign in every sense to my not-quite teenage world. It was the first house song I ever heard and loved. It is the only song off that album I still love without any sense of irony seventeen years later. And it was the first time I ever heard anything from The KLF.

What was one track in my music collection has since bloomed into ninety-three. I have spent much time and energy digging into the rich written and visual history that was left in the wake of every incarnation of Bill & Jimmy that there has ever been.

Seventeen years since I simultaneously found The KLF as they retired. Fifteen since they burned a million quid. Fourteen since The Magnificent. Twelve years since Fuck The Millenium.

The KLF has endured with me for reasons that only became obvious recently — something of a self-fulfilling prophecy, I realize. The goal of this post is to simply answer why. (Most of the quotes that follow are from Bill’s memoir 45, of which I have strangely purchased two copies.)

> Every morning I stop at the service station and pick one of those club compilation cassettes: Ministry of Sound Vol. III, Ibiza Classics, you know the ones. I shove it on the cassette player and drive. I hope to hear something that inspires me, makes me feel good, makes me think something’s going on out there in disco land. But it all sounds limp, crap, shit and lame. No ideas, no risks, just a bit of shallow packaging and an ad campaign. And they all come on like they are on some sort of a mission, like this well-past-its-sell-by-date handbag techno has got some sort of moral high ground going for it.

Arguments I’ve had about The KLF almost always boil down to their music, and I am forced to defend my choice to enjoy something that quite clearly was written as a joke.

Yes, yes. Doctorin’ The Tardis was an obvious piss-take.

But I don’t admire their music for the joke; I admire it for the risk. Getting their first album removed from sale by sampling too much Abba. Making a pop novelty album intentionally, without shame. Writing a set of #1 dance tracks filled with lyrics about the Illuminatus Trilogy. Getting Tammy Wynette to join them, even for one song. Filling an album with sheep sounds and country guitars, and somehow turning it into the seminal ambient house album.

Such actions require a serious disregard for one’s professional livelihood.

I sit and wonder where the boundaries are being pushed in music today. The “digital revolution” has certainly tipped the balance of power away from the labels and back towards the artists, but to what end? (Have you seen the iTunes Top 100 lately?) I’m sure there are artists out there doing this, but how many can claim they’ve both been reckless and successful?

It’s a bit hypocritical to sit here and wish for things that I wasn’t paying attention to when they were happening — my view of the KLF activities is all through the benefit of hindsight. But I am in love with the idea of a musician taking all the money they earned and burning it to keep warm.The argument continues: aren’t I perceiving risk when there probably wasn’t any? They knew what they were doing. This was all planned!

After the success of Doctorin’ The Tardis, there was a plan to make a film. A road movie with no dialog, no script – just a soundtrack. A film crew was assembled, and shooting began in the Sierra Nevada.

It was quickly apparent that the film was rubbish, but the soundtrack was tweaked, completed. and released. That album – The White Room – would have three hits reach the Top 5 in the UK.

> So why am I telling you all this, other than to brag about what a wonderful, rich and varied life we lead? Because I want to emphasize how, when you push your boat … take that step into the … and just say Yes, things happen. You may have no control over them. Let them be, let them spiral out there.

Unintended success on the pop charts may not be the most compelling demonstration of what can happen when you stop trying to control everything in your life, but it resonates. Great things are possible when you are willing to let them spiral out there.

With risk comes a chance of failure. Bill & Jimmy’s activities were not always a success, or perhaps even mostly a success. They were rarely in control, and the wheels frequently fell off the cart. And yet, this was never a problem.

Writing about the 2K Fuck The Millenium show — after quoting page after page of negative press, Bill concludes:

> And then I did understand. Everything was OK…We had not only blown it, we had destroyed whatever remnants of credibility, bankability, and myth we had left. We had been exposed for what we had become. It wasn’t just the money that got burnt; it was also the bridge that we could have trotted over any time we felt like it for a fiscal graze in the green pastures of success. With my finger no longer on the Zeitgeist, I could pick up this pencil, downgrade my horizon and get on with the rest of my life without being weighed down by that sack of credibility, myth expectations.

It is one thing to embrace risk. It is another to take your hands off the wheel. It is a third to be able to embrace your failure as much as you would your success.
Now I am racing to finish this post. It has been sitting in my draft box for longer than I care to admit, and there are a mere twenty minutes until midnight. I am determined to find the point to all of this.

The point, of course, is right in front of me; for once my wandering style of writing has found the destination. I’ve been thinking about Bill & Jimmy because they have lived much of their lives the way that I want to, perhaps the way we all want to. To embrace risk, to push boundaries, to be okay with not being in control, to accept our own failures.
Bordering on religion or a self-help book? Perhaps. But as far as life mantras go, one could do far worse than to embrace K-ism.

Bill is currently off redefining his relationship with music. Jimmy is challenging the art world.

I have some catching up to do.

> How deep does the irony have to go before we all drown? Time for tea. We’ve had enough. Just show us where the door is. The White Room is calling. 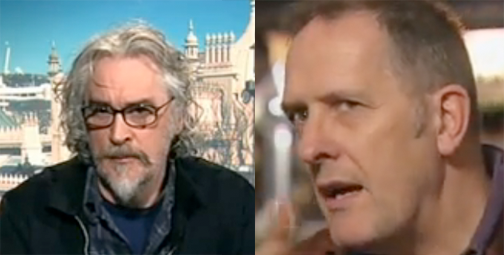