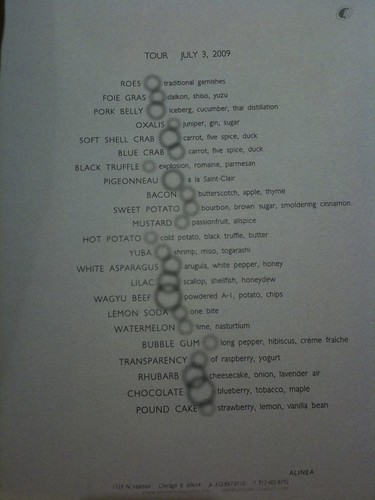 This past Friday night, Katie and I dined at Alinea, Grant Achatz’s restaurant in Chicago. Alinea is currently listed by Restaurant Week as the #10 restaurant in the world, calling it “arguably the most cutting edge food in America”. What follows is a list of what was eaten during our twenty-three course Tour menu. Page numbers are provided for reference where the dishes are listed in the Alinea book where applicable. Photos are not provided (save for one dish) as I as too focused on the food, but if you need visual accompaniment, two of my friends – Kathryn Yu and Ryan Adams – have Flickr sets from their tastings, and there’s certainly some overlap in the dishes.

Two FISH ROES, served with a caper cream, a dill cream, and a toast foam, intended to allow the roe to “pop” without a clash of textures from the traditional garnishes.
In a small bowl that we were not allowed to put on the table (for fear of it rolling), FOIE GRAS, over a shiso/yuzu broth.

Proceeded by a liquid shot of chilis and fish oil meant to prime the palate, PORK BELLY, sandwiched between two sheets of iceberg lettuce, with small rounds of cucumber, a dab of concentrated chili referred to as “the red button” (as in, “if you don’t like spicy things, don’t push the red button”), and a basil vinaigrette.

A small block of OXALIS JELLY with embedded juniper berries, each corner featuring a small dab meant to activate a portion of the tongue – citric acid on one, gin on another, sugar on a third, and so on.

SOFT SHELL CRAB, served with duck (mostly confit) and a variety of asian spices, all of which were normally used with both main ingredients.

BLUE CRAB and duck, reduced to a mousse, with many of the same spices as the previous dish changed to foams and creams, served in a cup.

BLACK TRUFFLE “explosion”, a small ravioli-like pasta that bursts with black truffle juice when placed in the mouth, with romaine and parmesan. (Page 238 in the Alinea book.)

Served with traditional french silverware and china, PIGEONNEAU À LA SAINT-CLAIR, served in a flaky pastry shell, providing a modern take on a classic French dish.
BACON wrapped in apple and butterscotch with thyme, served on a wire bow. (Page 116 in the Alinea book.)

A tempura-fried cube of SWEET POTATO, with brown sugar candy and bourbon gel, all skewered on a smoldering cinnamon stick. (Page 367 in the Alinea book.)
A mysterious single-bite disc on a pin intended to melt in the mouth, later revealed to include MUSTARD, passionfruit, and allspice.

BUTTERMILK BREAD with honey and coriander.

HOT POTATO, Cold Potato – a wax paraffin bowl containing cold potato soup, pierced with a pin holding a piece of yukon gold potato, a slice of black truffle, a cube of butter, and a cube of parmesan; the pin is removed, plunging the ingredients into the soup, which is then downed like an oyster shooter. (Page 304 in the Alinea book.)
A YUBA stick, wrapped in shrimp and coated in sesame and orange, served as if it were a pen in an inkwell containing miso mayonnaise. (Page 229 in the Alinea book.)

Meant to evoke Grant’s memories of fishing when he was young, a stew of scallops and shellfish, with honeydew foam and tofu-like pillows of LILAC.

A braised cube of WAGYU BEEF, served with a similar cube of mashed potato, chips of salt and ground pepper, with a packet of many of the dried ingredients that make up A1 (anchovy, raisin, tamarind, clove), and an abundance of “grill smoke” pouring from a centerpiece we had been brought at the beginning of the meal with no explanation. (Similar to, but not presented in the same way as, page 194 in the Alinea book.)

A beautiful TRANSPARENCY of raspberry, with the flavors of rose and yogurt. (Page 177 in the Alinea book.)

A tube containing a hibiscus jelly, a section of créme fraîche, and jelly-like beads flavored of BUBBLE GUM; the tube was intended to be sucked like a milkshake straw.

A candy-like ball-shaped lime shell, floating in nasturtium syrup, that when eaten broke, and flooded the mouth with WATERMELON liquid.

Served on top of a pillow filled with lavender air, a cheesecake accompanied with onion and RHUBARB. 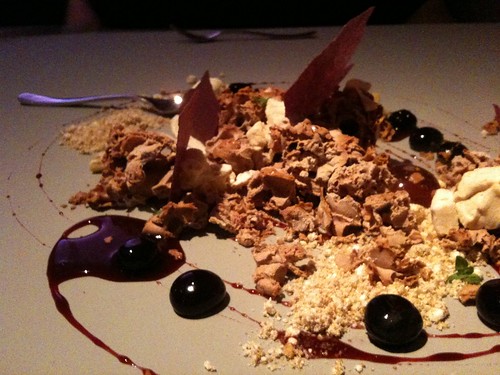 Finally, a POUND CAKE lollipop, with strawberry and lemon flavors, served on a vanilla bean.

Kathryn Yu, who may have been equally as excited as we were about our reservation even while on her own honeymoon, asked the next morning: Have you recovered from Alinea yet?

Short answer: no, and I am not sure if/when I ever will.

When we were seated, we were warned that The Tour was “a commitment”. Three and a half hours later, we were unable to provide any argument. The marathon of sensation had taken its toll, and we collapsed promptly after returning to the hotel. It was hard to process what we had taken in.

Reflecting back two days later, I am still recalling the sensations of the dishes: the rich taste of the wagyu melting against my tongue; the texture of the roes as they popped; the way the watermelon ball broke apart and the truffle explosion burst. Out of the twenty-three courses and four breads I’ve listed, I was able to recall all but two with no memory jogging beyond looking at the somewhat abstract. To have that level of recall out of such a lengthy meal is unusual, to say the least.

To say nothing of the enthusiastic waitstaff or the playful utensils, the food experience at Alinea stood out as innovative, challenging, and playful. Without good food, the experience would fall apart, but we were almost always licking the dishes clean, wishing we could ask for second servings. There were no bad dishes across the entire meal, and again: for such a lengthy meal, that is quite a feat.

It is clear that Alinea is not a place where anyone would easily become a “regular”. There is no bar, no lunch service, no scene at which to be seen. Reservations require perseverance and luck; the bill demands belt-tightening. But the hurdles, as at any fine dining establishment, are worth overcoming.

Grant and his staff are doing amazing things with food, and I would be lying if I said I wasn’t already dreaming of another trip back to Chicago, just to sit at that table all over again.

Consider this the highest of any recommendation I have ever given.