In May of 2007, my Xbox 360 suffered from what is commonly referred to as the Red Ring of Death. A series of four posts followed, in which:

* I spent 40 minutes on the phone with Xbox Support to request my “casket”.
* A week later, I received an extremely destroyed box that I was intended to ship my 360 back with.
* Two weeks later, I received a 360 that was not my own back. Because of Microsoft’s DRM, I then had to fight to get my purchases reactivated.
* This fight lasted another ten days, and involved a Better Business Bureau case, a text adventure, and much screaming into the phone.

Last, my launch Playstation 3 began to routinely crash after 30 minutes of use. This, as far as I can tell, is not a widespread problem – the closest parallel that Sony has is the “Yellow Light of Death”.

After the frustration I had dealing with Microsoft – a combination of poor materials, shoddy business practices, and a cavalier attitude towards the customer’s experience – I figured it would be worth documenting whatever hell Sony would put me through. Horror stories are easily found regarding service for launch units, include time frames of “months”, due to Sony no longer manufacturing that exact type of hardware. And given the bile that was spilled regarding the 360’s failures, it would only be fair to hold the PS3 up to the same light.

Before I begin this blow-by-blow, a few notes:

* My issues with Microsoft occurred a roughly two months before Microsoft wrote down a one billion dollar loss to extend the warranty on all Xbox 360s for the RRoD. Their process may have improved in the last two years. (As a result of my experiences, all of my multi-platform purchases have been on the PS3 or PC since.)
* My PS3 was not completely broken – it would still boot – and so while I am still mostly sure this was an optical drive issue, this was a somewhat preemptive service request.
* My PS3 was also not under warranty – which meant this repair was paid for out of pocket.
* Because of the hardware backwards compatibility, allowing me to play PS1 and PS2 games natively, it would be critical that I receive the same model of PS3 back.
* Since SingStar DLC is tied to one PS3 (rather than 5, like most PSN content), it would be important that I receive my original PS3 back. Sony does have a process to reset SingStar content which takes an average of 3-5 business days, from what I’ve heard.
* The final complication is that I replaced my PS3 hard drive in January of 2008, upgrading from 60GB to 250GB. While this is completely supported by Sony, I managed to strip the vital screws in the process, so my hard drive was not in the standard protective metal sled. Most stories I had read indicated that sending a non-standard hard drive to Sony would end up with it getting replaced with a stock hard drive; no one that I could find had sent in a hard drive in this unprotected state before.

After reconfirming with multiple discs that this issue was widespread, I first went to Sony’s support site. After clicking the “Service” link, I was slightly annoyed to not find a phone number. I have an innate distrust of automated repair systems, preferring humans as they are easier to vent at.

But after realizing that it was a Sunday and calling Sony would probably get me nowhere, I filled out the form. It was roughly four pages, which included giving credit card information to bill the $150 (plus tax!) charge to.

Nearly immediately, I have a confirmation email with a service request number and a confirmation of all my fields. Slightly better than the Microsoft experience, which only gave me a very generic email telling me to follow the instructions I had been given over the phone.

Thirty minutes later, another email arrives, indicating there was a form that I could print out and fill out that would need to go in the box when it arrived. Okay.

I proceed to attach my large USB drive to the PS3 and did a backup of all of my data. It took around four hours for 75GB of data. Meanwhile, Memorial Day weekend continued.

I receive a shipment confirmation from UPS that a package from SSC will be delivered to me the next day. 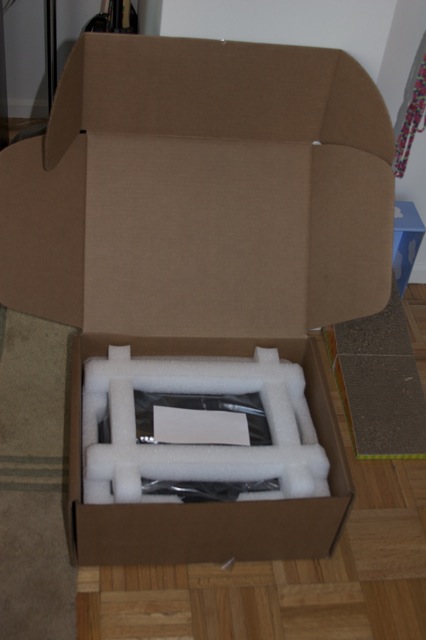 The casket arrives. The difference between it and my Xbox 360 casket is night and day. This is a box I am not uncomfortable putting expensive hardware into.

The form that I had been instructed to print out earlier came with the box. Obnoxiously, the area to enter the service number is one character short. My belief of writing outside the lines comes in handy this one time.

I also am asked to re-state the problem with my system, and in addition to mentioning the optical drive failure, I add “ALSO STRIPPED THE SCREWS FROM THE HARD DRIVE CARRIER – COULD YOU REPLACE?” or something similar. This is a desperate attempt to get them to not throw out my hard drive, even if the cost to replace it would be relatively small.

I de-authorize all of my PSN accounts and factory reset the machine (as instructed by Sony), pack it away, and tape the box shut. Shipping will have to wait till Monday.

I drop-ship the box from the UPS store near my office. Expected delivery to Texas is June 4th.

That night, I plug in my USB hard drive and take a look at the backup folder, and noticed that it seems a lot smaller than I would have expected.

Checking my favorite delivery tracking app, I see the package is out for delivery. Then, my gmail chimes, subject “Your system has been received by PlayStation”:

>Sony Computer Entertainment America,Inc. (SCEA) has received your system at our service facility. Turn around time for most products are 7 to 10 business days. Please note, turn around times may vary depending on your product, the type of service being done and any courier impacts.

UPS has not signaled that the package has been delivered, which means Sony has processed the delivery faster than the courier that delivered it. I am mildly impressed.

I am at WWDC, about to have dinner with a variety of educational IT folks at the conference from NYC. My mail badge lights up. Subject: “PlayStation Shipment”.

There is a UPS tracking number.

I am incredulous and immediately suspicious. If they shipped it that day, would they have even fixed it? Did they just swap me another PS3? Am I going to get it back with a message that I had voided my warranty?

UPS pulls off some amazing bullshit and manages to take a package that was in Newark – a mere 8.5 miles from my apartment – and sends it to Philadelphia – 97.3 miles away. Only a 1045% increase in distance.

Katie calls to inform me the PS3 has been delivered.

I ask her to check the serial number to see if there was any chance we received our original unit back. It is.

I ask her to power it on and tell me how much free space is showing on the drive. She reports back that there’s about 210 GB.

I am speechless. Katie hangs up to watch a Blu-ray.

While I don’t have day-by-day notes for how long the Xbox 360 ordeal took, but diving from my blog posts, the hardware replacement process went from May 17th to June 6th – twenty days total, with fourteen of them being business days. So the overall turnaround time was exactly the same. There’s a possibility I could have driven down the turnaround time by three days had I shipped the PS3 on Friday (the 29th) instead of Monday (the 1st).

There is another difference worth noting: Sony actually repaired my console and returned it to me. (They even fixed my jury-rigged hard drive upgrade.) Microsoft provided me with a refurbished unit, which forced me to go through the DRM reset process; this added another nine days (seven business) to my hell experiences.

More importantly, there’s a level of common sense that Sony’s process entailed that Microsoft’s had not grasped. Tracking numbers for every one of the three shipments saved me from blindly wondering where my console was. Emails confirming all of my details and notifying me when repairs were done. No painful calls with call center reps from who-knows-where. No escalation, no dropped calls. No need to call in the Better Business Bureau.

The punch-line with my PS3 repair experience is that there is no punch-line. The repairs were of reasonable speed, the communication was great, and I was back up and running with all of my games by the time I got back from SF on Saturday morning.

So kudos, Sony. You may be stuck with the same shipping times (unsurprising, given that you’re both using UPS), but your process is a pleasant walk in the park by comparison.