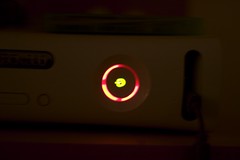 Tuesday night, in preparation for the Halo 3 beta going live, I decided to power up my 360 and play some Crackdown. This could well be described as a *huge mistake*, as the game crashed hard and lead to the much dreaded **red ring of death** – three red segments on the Ring of Light™. The RRoD means “hardware failure”. It means, “time to call the support line”. It means “buddy, you are screwed“.

The [failure rate](http://www.neogaf.com/forum/showthread.php?t=148060) of the Xbox 360 is one of the console’s dirty secrets. But from Microsoft’s perspective, it’s [something consumers shouldn’t worry about](http://blogs.mercurynews.com/aei/2007/05/peter_moore_interview_part_three_answers_to_readers_questions.html):

>I can’t comment on failure rates, because it’s just not something — it’s a moving target. What this consumer should worry about is the way that we’ve treated him. Y’know, things break, and if we’ve treated him well and fixed his problem, that’s something that we’re focused on right now. I’m not going to comment on individual failure rates because I’m shipping in 36 countries and it’s a complex business.

The community response to this story was [about what you’d expect](http://www.neogaf.com/forum/showthread.php?t=154448).

Anyhow: After reviving my console for a day (thanks again, Jared), it went back to the red ring. Knowing that my warranty was expiring sometime in the near future – it’s been almost exactly one year since I bought my 360 – I bit the bullet and called Microsoft tonight.

I had heard some horror stories about the support line. A friend who had called was at one point instructed to log into his Passport account. This would have been trivial had he not been calling in about resetting the password to that very account. So I was prepared for sheer lunacy.

What follows is my running notes from while I was on the phone.

7:14 – Dialed the fateful number. It doesn’t even ring once before connecting. And how nice of Microsoft to play the 360 startup sound when you connect! It makes me feel like I have a working console.

7:17 – Into the dreaded agent queue. No ETA given outside the earlier warning that they’re getting “a lot of calls”. Promising. Also, this music sucks.

7:20 – Ooh, Chemical Brothers! They are back, with another one of those beats that may or may not rock my block. Hey, “Max”, when you said you were going to “check and see if an agent was available”, what did that means, exactly?

7:25 – And back to the generic techno. I wish I had a speakerphone so I wasn’t giving myself a shoulder cramp.

7:29 – Universal remote ad. Ooh, backlighting! Text messaging! Integrated X, A, B, **and** Y buttons? Max, you must be joking. This sounds too good to be true.

7:34 – I just came to the realization that if I’m still on hold in half an hour, it’s going to start cutting into the season finale of The Office. And that will not help my anger at all.

7:37 – Now a memory unit ad. Obviously this call is not being recorded, because my weeping isn’t getting my an agent any quicker.

7:39 – Ah, Canned Heat. See, it’s actually quite disturbing to me that a generation will know that song only for its use in Napoleon Dynamite, and not that it existed for many years before that and was (and still is) awesome in its own right. I hate feeling pressured to like things ironically. Wait, why did the music stop…oh, it’s ringing!

7:40 – Connected to “Brad”. He sounds absolutely exhausted and/or depressed and/or drunk. I will not find out which.

7:41 – Why do I have to verify my address for this call? Is someone else going to call with my serial and try and get repairs?

7:43 – “I really hate the red lights.” Brad opens up that he doesn’t like hearing that people have gotten the Red Ring of Death because it means they (as in Microsoft) have to take their (as in the user) console away from someone. He’d rather hear that people were playing with the consoles rather than sending them in for repairs.

7:45 – Brad has me check the power supply. Oh, Brad, come on, I told you I already checked this. We’re buddies now, you and I. You should know better.

7:46 – Brad tries to sell me on the extended warranty. But whatever is causing his sleepy sounding voice is also making this a very light sell. This is appreciated after the previous hucksterism for the 360 accessories.

7:47 – We start a conversation about the Halo 3 beta. He mentions that they may extend the beta even further because people can’t download it. I still have all doubt I’ll get the repaired 360 back before the beta ends.

7:49 – I can hear the other people in the room with Brad. They sound a little more lively than this poor guy. And suddenly, as he’s reading me the closing lines of the script (“All the troubleshooting techniques we used today are available on Xbox.com…”), my general disdain turns to sadness and maybe even some empathy. Brad does this sort of stuff all day long, taking calls from the increasing mass of people with busted 360’s. That very well may be the worst job in the gaming industry.

7:50 – Brad mentions that it takes 3-5 business days to get the box to me, but that because I’m in New York, it will probably be on the higher end of that scale. Speaks volume about what level of shipping Microsoft is using.

Exactly thirty-seven minutes, according to my phone, only eleven of which were with the actual agent. Six minutes were spent with the phone tree and automated help. Twenty minutes were spent listening to generic electronica and being pelted with the occasional advertisement.

I look forward to this misadventure continuing on for the next month.