In one hypothetical hand, I hold an instrumental version of Trent Reznor’s seminal (ha!) single, *Closer*. The original is directly sexual and raw. It continues to have one of the most familiar refrains in recent musical history – you know, the one about, er, doing things to people like an animal and feeling them from the inside.

(Warning: the song and the video, embedded below, are NOT SAFE FOR WORK. Also, do not play this if there are children in the area. Not because I don’t want them to see and/or hear it, but I don’t want to be held responsible if you hit the play button.)

In my other hypothetical hand, I hold the original staged version of *Business Time* by New Zealand’s fourth most popular folk rock parody band, *Flight Of The Conchords*. Never has the actual process of lovemaking been so accurately described.

You can see where this is going, I’m sure. And certainly this hilarious photoshopped image will make it even clearer. 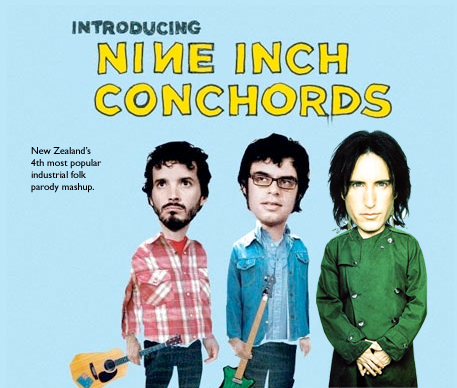 I would traditionally use this paragraph to half-heartedly apologize for ruining perfectly good songs in my mashups. Mocking my usual inability to find appropriate loops or sighing about parts where the track trainwreck, I would try to lower expectations.

Not this time. This one came out pretty well.

(For the technically inclined, this was done in a very uncomplicated manner in Ableton Suite 7.)