It’s been about five hours since I left the screening for Southland Tales. 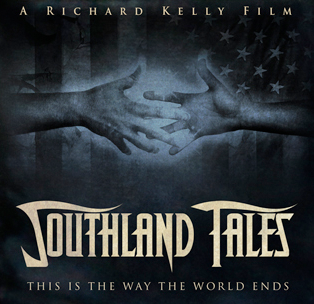 Southland Tales is the much maligned second film from Donnie Darko director Richard Kelly. It (somewhat famously) was ripped to shreds by critics at Cannes 2006 – Roger Ebert described it as “the most disastrous Cannes press screening since, yes, ‘The Brown Bunny'”. Forced back into the editing room, ST has been cut down slightly, and put into limited release this month to the sound of even more critical shredding. It’s currently holding a polarized 33% on RottenTomatoes.

I cannot begin to describe the plot. The best approximation would be to read the film’s keywords listing from IMDB, which I will reproduce here:

My initial impression, upon the credits rolling, was that it is the most gloriously incomprehensible movie to come from someone not named David Lynch I have ever seen. And I’d like to stick by that, if you don’t mind – it feels like a Lynch film, certainly more parts Mulholland Drive than parts Eraserhead.

I’ve certainly found RottenTomatoes to be wrong before, but I’ll be honest: there exists a significant chance that you could hate this movie. It is, as many reviewers on both sides of the fence pointed out, a mess. There exists a significant chance you’ll dislike it. It’s not mainstream, and possibly not even acceptable enough for the “underground”.

But, to remain honest, I did love it. Even amongst the mess, I found reasons to laugh, to be afraid, to cringe, and to smile. Within the busy backgrounds and near sensory overload lay extra jokes, bits of story lines, and small details for those paying attention. It is a movie that, in some small way, rewards NADD.

To tweak a line from the Boston Globe, it is a messy movie for our messy times. And for that, I recommend Southland Tales.