Back in July, in a fit of self-documenting, I took two pictures relating to my gaming library. I caught a small amount of hell because the PSP library is larger than the DS library by at least a 2:1 ratio. (It should be noted that games are missing from both pictures, and this ratio has not changed since the pictures were taken.)

There are many reasons for this, but this post is not about why. At least, this is not about most of the reasons why. Instead, it’s about one reason that is not solely limited to the DS, although it does happen there more than anywhere else.

Many video games are too long to finish in one sitting. Because of this, ways to save the game state have been created over the years. Three have stood out. 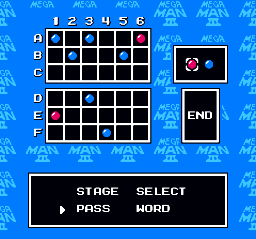 First was the idea of passwords: usually a string of letters which you can re-enter later and the game deciphers it to drop you back around where you were. Some games used other methods – symbols, numbers, and in the case of Capcom’s Mega Man series, a grid. Mega Man 3 is pictured at right with a password that starts you at the end of the game – two colored symbols placed in key locations on a 6×6 grid.

Passwords were painful for two reasons: one, they were often long and unwieldy. Passwords for the NES game Rambo were 32 characters long and case-sensitive. This made most passwords hard to capture, hard to re-enter, and easy to mess up. Two, passwords can only capture so much information – so for games with detailed inventories or statistics, a password is rarely able to save the state properly. 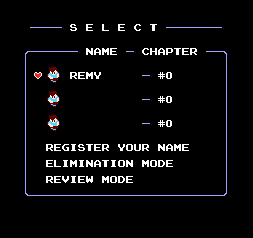 Next came per-game battery backups. By adding a small battery and some RAM to a game cartridge, games could save their state and have it maintained with the power off. Often users were given three or four “slots” in which to save state. This worked terribly well for most games that needed to save more data. Pictured at right is Nintendo’s Startropics – the save screen is familiar to anyone who’s every played The Legend Of Zelda

Still, battery backups were not flawless. They added cost to the production of the game, which was difficult to justify when saving things like settings or high scores. But even more problematic was when the gaming media of choice shifted from cartridges (which could be read-write) to CD-ROM media (read-only). In a related sense, as games grew and grew, the amount of data that needed to be stored also grew – and battery backup didn’t provide a lot of space. 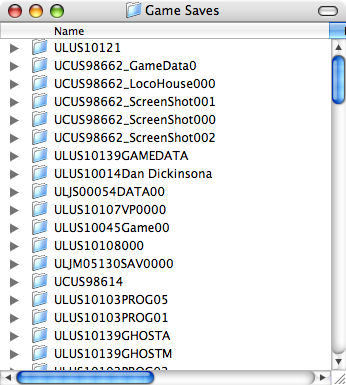 The answer to this problem – and in a way, where we still stand today – became memory cards, or at least user-controlled storage. Gamers could have a small card that they plugged into their consoles, and the games knew how to interface with them to read and write their data files.

Besides being portable and not associated with any one copy of the game, there’s an added benefit to memory cards. Saves are basically files, so they can be copied between cards, deleted if no longer needed, and with the right software, modified/edited/hacked. The PSP’s memory stick is treated by most computers as just an attached disk, so it’s very easy to backup all of your game saves or load in other people’s saves. At right is a listing of a handful of the 105 saves and add-ons I have backed up from my PSP memory card.

(At this point, the people who game a lot are getting restless with this post – this is all reasonably common knowledge. Stay with me.)

I live in a house where everyone is a gamer. (This includes my cat.) Katie and I both game – me considerably more than her, but she does have her own DS, her own PSP, her own 360 profile, her own PS2 memory cards. Not every game we purchase is shared, but there is a reasonable amount of overlap.

For the PS2, sharing games isn’t a problem, outside of occasionally figuring out which save is hers. The 360 works beautifully – her profile only shows her games and her stats, and nothing of mine. On her PSP, her memory stick contains all of her saves – no problem there.

The DS, on the other hand, is a nightmare for multi-gamer households. This manifests itself in two ways:

First, because it has no internal memory, all games must use battery backup. For reasons that escape me, too many games only offer a single slot. Feel The Magic, Phoenix Wright: Ace Attorney, Mario Kart DS, Meteos, Ouendan, Tetris DS, Point Blank DS, and Cooking Mama (the game that sparked this post) – all only support a single profile. I’m sure there are more; these are just the ones I’ve purchased and can remember. (I’m fairly sure Metroid Prime Hunters and Starfox DS don’t either.)

The response to this might be “Who cares?” – an appropriate response for most gaming complaints, I will admit. What it boils down to is the integrity of my data. I want to know how far I am in the game. I want to see what my best times are. I want to load from where I left off. If someone else wants to borrow these games, they are only able to work off of my game. My records are no longer guaranteed to be my records.

The second manifestation is even more dire; it lies in Nintendo’s Wi-Fi implementation. To connect to other people using Nintendo’s Wi-Fi Connection (or WFC), you have to exchange friends codes, a 12-digit number that is generated based on the game you have in and the DS you’re using.

Having it generate based off the game you’re playing means that for a gamer with fives WFC-capable games, they have five different codes to give to all of their friends, and all of their friends also have five codes. Having it generate based off the DS you’re using means that you can’t go online with a different DS without erasing all of your existing WFC data. (If you’re permanently switching DSes, there is a transfer mechanism, but again, this de-activates the code on the first unit – and this has to be done for each game.)

This is, quite frankly, bullshit. Why is my “account” – and I do use that term very loosely, as very little is stored on the cart – tied to my device, instead of on the server? Why is there an assumption that the game will only ever be used in one handheld, by one unique player?

It’s hard to deny that the technology world has focused on multi-user systems in the last 10 years. Social networking is big; “collaborative software” actually means something; all major OSes support individual user profiles to great extent.

With multi-user gaming, there are plenty of instances of things going right. Xbox Live, despite the overwhelming population of southern racist teenagers, nails how to do user profiles. It’s in fact one of my favorite features about my Xbox 360. Sony’s standardization on memory cards have made multiple users support a no-brainer for almost all Playstation-family games.

The issues with the DS I’ve listed above are show-stoppers for me. I cannot get the very basic functionality I want out of games I have purchased. There is nothing I can do, short of buying a second copy of any game I intend on sharing.

Worst of all, this is not limited to third parties. I could understand if it was just Taito, or even just Namco or Capcom, but no – Nintendo, alleged savior of the gaming world, is doing this with their AAA titles. It’s their system, and even they can’t get it right. (Maybe this is brilliance on Nintendo’s part. Forcing parents to buy each one of their kids their own copy of Pokemon sure seems like an easy way to sell more games…)

We had games with multiple save slots twenty years ago. We shouldn’t be regressing.