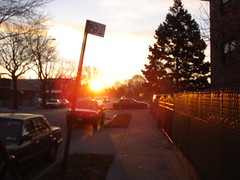 I promised myself I would do it at least once. Yes, this morning I left bright (!) and early at 7:30 to walk to my office on the Upper East Side. 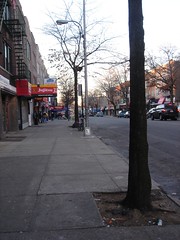 After getting over the GCP, I cut down Steinway Street, which was thankfully empty and uncrowded. It’s also full of odd businesses, so that didn’t hurt either. 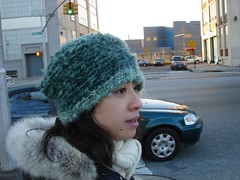 Ruth from work was my walking buddy, which made the commute considerably more pleasant and enjoyable.

Once we hit Northern Boulevard, we got asked by a lot of desperate drivers if we needed a ride. It was tempting, but the truth is, we were moving faster than they were. 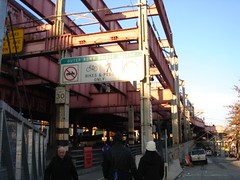 Getting from my house to the entrance of the pedestrian walkway for the bridge only took an hour, which is about what I expected, maybe even a little better. 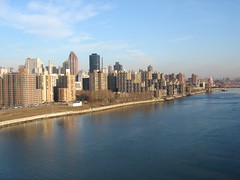 Once on the bridge, there were some fantastic photo opportunities, particular once you hit Roosevelt Island. Just based on the pictures I pulled out today, I’m planning on doing the walk again sometime when it’s warmer out. 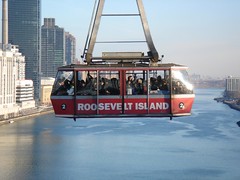 The Roosevelt Island Tram made an appearance just as I hit a fenceless patch of the bridge, so I lucked out with a picture. I’ve taken the tram before, and on the right day, it can be downright pleasant. But given the volume of people in there, I’m rather glad I didn’t try today. As Janelle pointed out, “not good for claustrophobics with fears of heights…”

The total walk took about 1:40, which was right around my estimate. My legs are okay (foot still hurts a little, but Advil has saved the day), my brain has returned to normal, and I’m almost – *almost* – looking forward to the walk home. Probably will take a different route, though.

(If you’d like to see the few more pictures of the walk, just check my photos tagged with “walktowork”.)