Yes, I did make it home last night; I just hurt tremendously after the fact. My previously pained foot was in serious pain for the entire evening. In total, I walked a little over nine miles.

I won’t lie, I was debating the merit of walking that far for most of the night. That much pain brings everything you did back into question, even if you did get a nice workout and connected on a new level with the city in which you live. This morning, the confirmation was there. 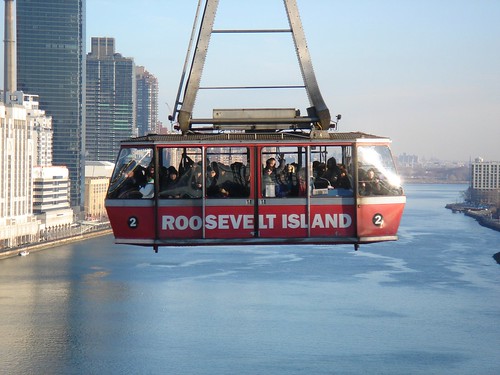 The picture of the tram from yesterday, thanks in part to a Gothamist post (check the comment from a girl who was in the picture!), is one of the most “interesting” pictures on Flickr for the day. As of my posting this, it’s received 1456 views (previous best: 1323), 26 comments (previous best: 12), 41 people calling it a favorite (previous best: 9), and I’ve received 7 people add me as a contact in the last day.

I post this not to boast but because I find it surreal. I know everyone has gushed over the photo, but…I don’t know, I’m missing something. I certainly like that it came out so crisply, and I like the way the water looks, and I enjoy that I centered it pretty well, but it’s missing that something that catches my eye when it comes to photos. All of this said, art is always subjective, and I by no means don’t want people to enjoy the picture. (It’s Creative Commons licensed, so feel free to use it for non-commercial purposes so long as you attribute it to me. If you’d like to use it commercially, please drop me an email.)

For the sake of a full explanation: the picture was taken while on the Queensboro bridge, on the north side walkway. There are a number of sections of the walkway that have no fencing up; I just happened to be going by one of these sections as the tram was coming up. The photo is unretouched – no cropping, no level tweaking. It was taken with my much derided Cybershot DSC-T7.

I did get one gripe from a friend about how he wished it would’ve been taken with a DSLR; perhaps after Sunday. (cue minor chord!)

On a personal note, I’m in Maryland until Monday for the holiday. I won’t be terribly responsive on AIM, or via any other channel you may be trying to contact me. Email is a safe bet, though. Happy whatever you’re celebrating, all!