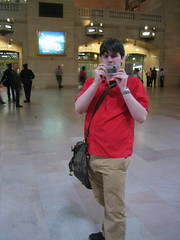 I’ll have you know I am most enjoying my week off. My percentage of vacations being at least slightly derailed continues to hold at 100%, although to be fair it was not a complete derail this time, nor am I in any way miffed or upset by the circumstances.

I’ve had two lovely, relaxing days strolling around NYC with [Suw](http://chocnvodka.blogware.com/blog) in her post-conference state, and I am lucky to have another two or so ahead. I do find it slightly odd how we endlessly have blog-related matters to debate, as I typically don’t find much cause to talk about blogging with the people around me – but no matter. (Suw’s recap of today was also [just posted](http://chocnvodka.blogware.com/blog/_archives/2005/10/21/1313691.html)).

– The iPod fills all the major gaps in functionality I had with my existing iPod (album art, battery life, click wheel, another 20GB of space) and the video capability is a nice bonus. My only major complaint is the lack of a remote port. Oh well. Full review coming next week.
– The Warriors, while not a perfect game, is probably the most enjoyable beat-em-up I’ve played since Final Fight. I just tore through the movie tonight, and Rockstar really has got it down to an almost uncanny degree. Full review coming in the near future.
– Shadow of the Colossus deserves to be sleeper hit of the year. I don’t have the patience to play it for long stints of time with company around, but I’ve burned through the first two colossi, and this game is a huge breath of fresh air. Anyone who appreciates games as more than mere entertainment – and who can stand a game that discourages ADD-style playing – owes it to themselves to pick this up.

I apologize for the lack of pictures as of late; I seem to have lost my battery charger for my camera, and I am nearly out of juice. I will be running to the Sony store any day now to buy a new one, I promise.

That’s all I’ve got for now. Keep in touch, won’t you?