I’m happy to announce that I’ve been published a second time for my Quicksilver work. 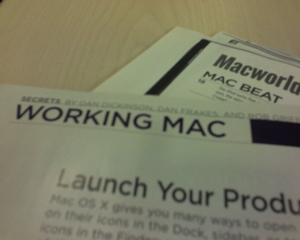 This time, you can find my contributions to a MacWorld article, entitled “Working Mac: Launch Your Productivity” in the January 2007 issue, which should be on newsstands now and online within the next month. The article covers tips using all three major launchers (Butler, LaunchBar, Quicksilver) for OS X. Dan Frakes and Rob Griffiths also contributed.

I realize, looking at the article, that it actually got chopped down from what I had originally written – which bodes well, I guess, for my ability to write lots about Quicksilver.

For those who missed my first printing, my original tutorial was published in O’Reilly’s [Mac OS X Panther Hacks](http://www.oreilly.com/catalog/0596007183/).

I hope to be able to announce my third printed Quicksilver endeavor within the next month.

I received an email on Sunday from someone on my blogroll. While I will keep their identity hidden to avoid potential embarassment, the message read:

YOU read MY blog? I’m surprised.

I could answer this in a snappy two line response, but it’s also an interesting question because it actually touches towards one of the weird internal issues of blogging. So I’m going to make a big deal out of what isn’t and subject you all to my babble once more.

First, the factual answer: yes, if you’re on my blogroll (the list of links to the right that just reads like a straightforward list of people), I read your blog. Even if you aren’t there, there’s a chance I’m still reading you. I’ve been an syndication addict for a few years now, and the primary benefit of digesting my friends’ pages in feed format lets me keep up with everyone equally. The other big benefit is that I no longer need to spend 8 hours a day surfing from web page to web page – I can now spend a mere 6 hours a day incessently checking my feed watcher and reading every last bit on my inbound feeds.

But the larger questions here – who reads my blog? should they read my blog? and should I be surprised? – have always been those questions that tickle me in odd and often times inappropriate ways. This may in part largely be to the change in how blogs – or at the very least, mine – are treated.

For instance, I was at a birthday party earlier this month for a friend from Cornell I hadn’t seen since graduation and only get to talk to about twice a month. I was attempting to catch up with her at said party, and after one story, the response was “Oh yeah, I remember reading about that on your blog”. Needless to say, I was surprised. (And incidentally, hi, Amy!)

But why should this surprise me by this point? I’ve been blogging for four years now, and while the first two were largely unread (and long since destroyed between ISP moves and blog-software switches), I should now be used to the idea that most everyone in my life reads my blog. Friends, co-workers, VJ Army users, the Bemani communty, 8BOP, customers, maybe a few from the Mac gaming industry or #joiito, and a handful of random people I have a hard time attributing. Even my mom reads my blog – and has, at least once, admonished me for not blogging often enough to the point where she thought I might be dead.

I don’t keep a blog to replace direct social connections (although it would certainly be easy enough.) I see it as a group conversation at a bar – here I am trying to tell this story, and you may not be able to understand me or get the joke, but you sit there and nod and smile and maybe hit me with a comment, and we all have a decent time.

(Half the time, to be honest, I don’t know how everyone can stand reading my randomly targetted and inside-joke laced writing style. But then I realize that’s the way I actually am instead of merely writing that way, and the guilt subsides.)

What does still surprise me is any time I am linked to by the “A-list”. For the Quicksilver tutorial, not only did I get trackbacks from a number of blogs I’ve read before (NSlog, Disobey, the guy who runs the CSS Garden), but I was also asked to license my post for a book from a well-known technical book company. The NY1 post yielding an email from Pat Kiernan had a similar effect.

The part that irks me about this isn’t that highly visible people are stumbling onto my blog, it’s that I’m now fighting this urge to make posts appeal to certain people. I’ve been cursed into believing that I have to be funny and/or insightful, when I know damn well that’s not necessary to have a decent post. So I become stuck in a rut where nothing I write feels suitable for posting.

Even this post has been revised multiple times – partially to fix typos and flow, but also in failed attempts to make it “more insightful”. You know, just in case I suddenly have that monster epiphany.

So my recommendation to everyone (including myself, albeit a bit too late) is to not think too much about who’s reading your posts, or what it means in the grand scheme of things. It shouldn’t affect you nor what you write. If you it does, you’ll dilute your efforts and lose the joy of sharing with people what you think and feel.

(Aren’t you glad it took me that much text to not really say much of anything? I am.)