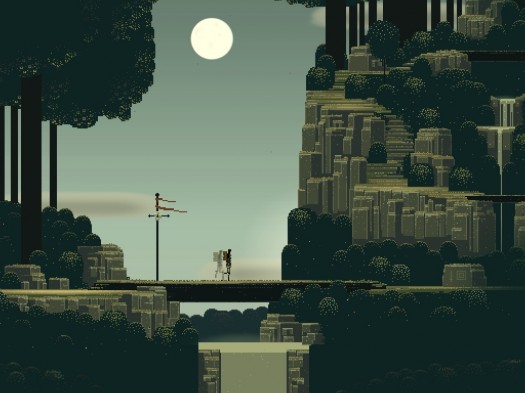 iOS gamers are this year’s gaming community scapegoats. With Nintendo and Sony’s handheld platforms under siege, there’s a certain level of disdain that generally comes up when discussing the ascendancy of smartphones. “Touch controls are terrible!” they shout. “Angry Birds is a terrible game,” they whine. “The App Store is full of garbage,” they blabber.

Should anyone take a step back and look at the library of any mobile gaming platform, there’s always a lot of poorly written garbage. The DS has been predominantly shovelware and the PSP has been a graveyard for the last few years. The key, as with any system, is to find the diamonds in the rough.

Beyond all other iOS games this year, that game was Superbrothers: Sword & Sworcery EP. It won seemingly the most superlative praise of any game this year.

> It manages, with reverent deftness, to evoke and honour the influences of its creators, while simultaneously providing a multisensory experience that feels novel and groundbreaking today. A landmark achievement, it raises the bar for independent game design much as the Washington Monument did for independent obelisk design.

> If Roy Lichtenstein were weaned on things like 8-bit games, “Kid A” and the iPhone, these would probably be his Benday dots. Yes, in the end, “Sword & Sworcery” is just a game, but in its own meta way it’s also a kind of pop art for the digital age.

> Steve Jobs may have promised all you Apple fans some magic … but it’s the Superbrothers and company who are delivering it.

> It’s a game that will make you believe.

> Gaming doesn’t need to find its Citizen Kane, but it may have discovered its Rosencrantz and Guildenstern Are Dead without even trying.

I can vouch for it being a beautiful and absorbing game, but like many other titles I’ve played this year, it was one I failed to make much ground in. I have placed it in this list not only because it’s won widespread praise from critics and friends alike, but also because it represents that iOS can indeed have those critical-smash titles that gamers so deeply value when measuring the worth of a platform.