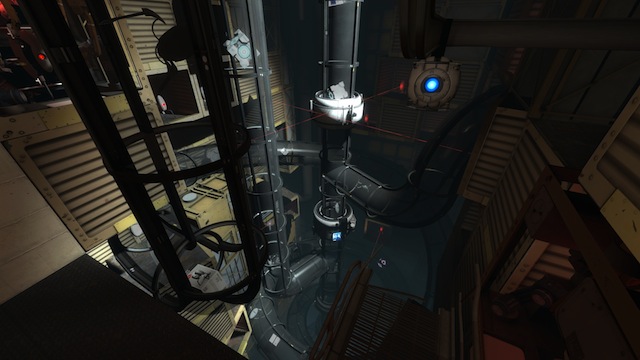 More than puzzles, rogue AIs, cake, lemons, or potatoes, I consider the Portal series – and especially this year’s Portal 2 – to be about space.

Consider the original game: you wake up in a confined cell, and are only released after a timer counts you down. As you progress through the stark white test chambers, they gradually open up in size. You begin to find cracks in the system, holes in walls that lead to clues that there’s something much larger going on around you. Then the much promised twist comes, and as you flee, you start to see how large this world might be. The game ends with you in the outside world, collapsed on the pavement, with the sun shining down on you.

It’s been over half a year since I played through Portal 2, but the bits that have stuck with me all relate to the use of space. In particular:

Waking up at the start of the game in a small, obviously fake hotel room. As the room is forced to move, the walls begin to fall apart and you take in rows upon rows of shipping containers – all presumably holding rooms similar to yours. Yes, it’s a set piece. Yes, there’s minimal interactivity. But it sets the stage, letting the player know that this world goes far beyond their view.

Throughout the game, while you may be on narrow platforms and ramps, the game areas typically have unbelievably high ceilings, with tubes and machines stacked as far as you can see.

The intermediary caverns, used to traverse between the major areas of the game, are huge. I actually disliked these parts – they were an exercise in zooming in to a distant platform, praying you might find a surface to open a portal on. Flawed as they were, they did convey a sense of distance and expansiveness to the world.

Portal 2 expanded on the idea that the test chambers were configurable, and often does so right before you, walls shifting mechanically to define the space. Sometimes this happens slowly — rooms that aren’t ready when you enter them. Other times it’s done as part of a chase sequence, forcing you to re-evaluate your options on the fly. You never lose sight of the fact that beyond the walls of the chamber you’re in, there’s a giant world.

Consider GLaDOS herself as well. Originally just a person, her mind is transferred to a computer, and suddenly she is omnipresent within the walls of Aperture. In the middle of Portal 2, she is transferred to a potato battery — clearly a space too small, as she constantly shorts out — and forced to ride shotgun with you. Your main mission becomes to restore her as she was, as the alternative you’re faced with may be much worse.

And of course, there are the two big moments right at the end of the game: the roof caving in during the final boss fight, where you must use space quite literally; and your eventual departure from Aperture Science, left to your own devices in an endless field of wheat.

Portal 2 is better in practically every way over the original. The new mechanics, the writing, the music, the voice work, and the co-op options are all top notch. But it’s the sense of scale and space that made it transcend the first game for me.

As a postscript, I also want to cite Erik Wolpaw’s wonderful offhand comment about Chell’s fate in an interview he did with PC Gamer shortly after release:

> She does get a happy ending, there’s no point in being negative about it, I just can’t let go of the fact that we know where she gets that happy ending, and there could be some danger out there. I’m an adult, terrible shit happens to me all the time. I want happy endings for everyone, the kind I’m not gonna get in real life – I mean, we’re all gonna die, let’s face it.

Portal 2 is available for Windows and OS X on Steam, the Playstation 3, and the Xbox 360.