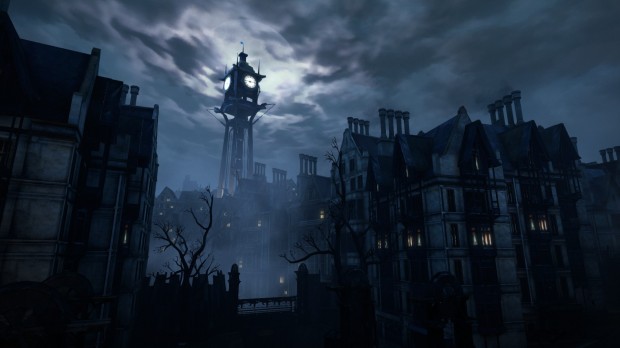 It will then come as no surprise that I love Dishonored, this year’s big title from Arkane Studios and Bethesda. The world is not quite as wide open as Skyrim was, but I’d argue it has more character. The elaborate confines of Dunwall are a strange cross-pollination of London and steampunk, and the game gives you room to explore and plot your own paths rather than being shepherded down a straight line.

Dishonored – or rather, someone writing about it – opened my eyes up to an aspect of game design I hadn’t considered much before. Alec Meer’s “Dishonored: The Onion” was probably my favorite piece of writing on the subject of games this year, and may have also been the article that pushed me over the threshold to buy the game at all. Alec’s main message: *turn off the quest markers and slow down*.

If you want to rush around with a gun, shooting anything that moves, don’t buy Dishonored. It has put those things in there for you, and it offers slick, brutal, varied permutations on how to use them, but they are not its all. If you’re looking for 10+ hours of shooting men, or even stabbing men, you are well-served already and forever by games that do that, do it well, and do it for a long time. You and those like you are the victor of the great games race, and you have the spoils, many times over.

So let us have Dishonored. Let us have this one expensive, luxurious game that only truly works, only sings a glorious tune, only becomes a 20+ hour game if met by those who treat it in the spirit with which it is offered. Don’t tell us it’s too short and too slight just because you don’t find combing through its many layers, peeling back every last millimetre of artfully subdued skin, of interest. Because you want to rush to the conclusion, and you don’t believe anything that doesn’t explicitly inform reaching that conclusion is worthwhile.

I had not yet completed Dishonored. It was a conscious choice, as I’m saving the rest for after I can upgrade my desktop later this month. But I had experienced and greatly enjoyed the “layers” Alec describes: stumbling my way down unknown streets; creeping in the shadows through a house I’m not sure I needed to break into; opting to not go straight through the front gate but always around the side.

And he’s absolutely right – turning off the quest markers DOES make the game better. Without an omni-present waypoint beckoning you into the distance, you are left to your own devices. You’re more prone to wander down a side hallway and discover something that helps enrich your understanding of the world. You’re less likely to know when a set piece is coming. It wouldn’t work if Dishonored was meant to be played linearly, but with so much in Dunwall that’s worth exploring, it’s a better choice than becoming a slave to the marker.

The next time you’re playing something, and that waypoint pops up in your view, ask yourself: can I find my own way? It may just be the better choice.

Dishonored is available on Playstation 3, Xbox 360, and Windows. My experiences were largely with the Windows version.