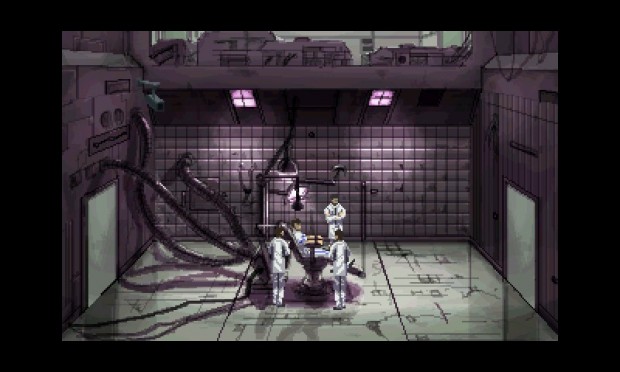 I’ve always been a big adventure game fan. The first serious PC games I ever dove into (Maniac Mansion, King’s Quest I and II, Space Quest III) all fell into that genre. I probably had more Sierra 5.25″ floppy disk sleeves than plain white ones.

There’s been a big resurgence in the genre as of late – which has generally been great. I hedge that with “generally” because there’s a common theme through nearly every adventure game series that has reappeared that didn’t used to be the case. Monkey Island, Sam & Max, Back To The Future, Hector, and Strongbad[1. I realize I’m probably picking on Telltale here, but seeing as they’re mostly the ones doing this revival, I’m going to allow it.] all are humor-focused games. What I’ve missed are the adventure games where the focus is storytelling, and narrative, rather than puns.

It probably comes as no surprise that the first time I fired up Gemini Rue and watched the opening – a man only referred to by his captors as “Delta-Six” has his memory erased, and seemingly not for the first time – I let out a huge sigh of relief.

Gemini Rue is one of those games that I haven’t spent enough time with yet. I have only made it through the first five chapters or so. But what I’ve seen so far reminds me so much of those old Sierra titles – the pacing, the atmosphere, the interface design. It’s a welcome reminder of some of my gaming roots.

People who fondly remember Sierra’s best work should give this one a look.

Gemini Rue is available for Windows.