A few hours ago, Apple announced that Steve Jobs had passed away.

While I had the opportunity to see Steve present seven keynotes – two MWNY, five WWDC – the one anecdote I have is about what didn’t happen at one of those keynotes. (It’s admittedly second-hand information and I never personally verified it, but I subscribe to the Tony Wilson/24 Hour Party People notion of choosing between the truth and the legend.)

People who have been reading this blog for ages will remember that in January of 2004, I traveled to Macworld San Francisco to work the Freeverse booth; the main title we were pushing was ToySight, our somewhat-ahead-of-its-time camera controlled minigame collection. It won Best Of Show, and many hours were spent flapping my arms to show the game off to people.

Despite the long-standing belief that Apple has never given a damn about games on the platform, they did – slightly. To that end, there was an Apple Games team, focused on developer relations, and at the time run by Rich Hernandez. (Rich was a great guy, and has since moved on to Microsoft.) Rich really liked ToySight, and wanted to see what he could do to see if it could be included in the keynote that year.

After being shown the game, or at least told about it, Steve’s reaction was apparently one of full interest, on one condition: that Phil Schiller be the one to demo it on stage. Long time Apple fans may recall Phil having to jump off a ledge holding an iBook to demonstrate the build quality, so I suppose this was part of Steve’s general love of making Phil look silly on stage.

Phil, regrettably, refused. The demo slot instead went to Aspyr for a Tony Hawk port. And so we grumbled and silently cursed Phil under our breath for denying us our brief shining moment at the keynote. But I love that thought of Steve: so ready to find ways to rib his team and push them out of their comfort zone.

(Thanks to Bruce Morrison for reminding me of this story.)

In all the rush to label him with titles like “this generation’s Edison”, I think people have missed half of Steve’s worth. He certainly brought innovation after innovation to the marketplace, showed the world that the conventional wisdom for how the tech industry “had” to run was flawed, and rebuilt a company on the verge of bankruptcy into the biggest technology company in the world. But just as importantly, he has served as a hero, a role model, and inspiration to a tremendous portion of the technology sector (myself included). It’s not just the products Apple brought to market under Steve’s leadership that will be felt for generations to come, but the products of the people he inspired.

It goes without saying that I will miss him greatly.

Touch Arcade and Techcrunch have details on ngmoco:)‘s acquisition of Freeverse Software. This has a lot of implications for the iPhone software market, but I’ll let the business wonks talk about that. 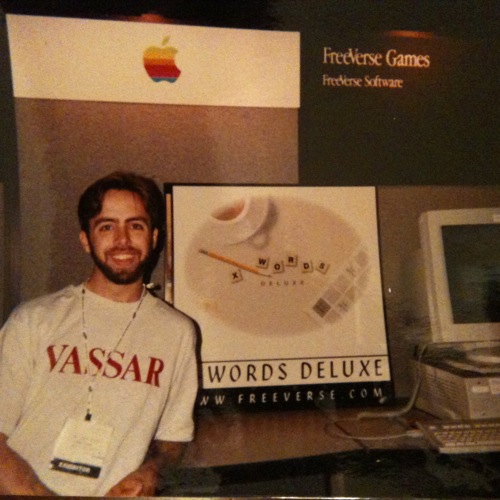 Freeverse is entwined in the last 15 years of my life in ways that few things can compare. Their games and software toys helped keep me sane during high school. When my life went into a slight free-fall during college, I became anchored with an internship with them.

END_OF_DOCUMENT_TOKEN_TO_BE_REPLACED

Activision had posted a job opening for an “Art Services Screenshot Associate“. Among the many bullet points of requirements (four year degree!) and job duties was this gem:

Perform advanced retouching of screenshots and teach skills to others as needed.

This sort of “honesty” from Activision is becoming more and more common. I look forward to the inevitable “Game Reviewer Bullying Associate” position getting posted.
But this isn’t a post to knock Activision around again. This is about career paths.