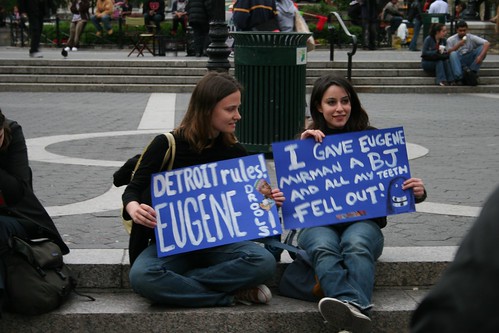 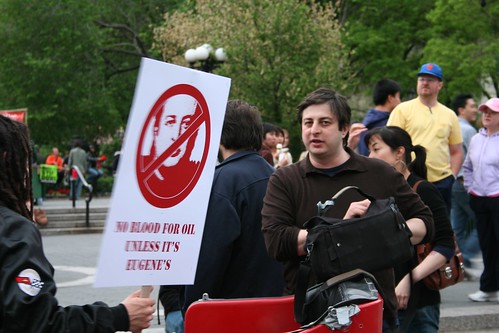 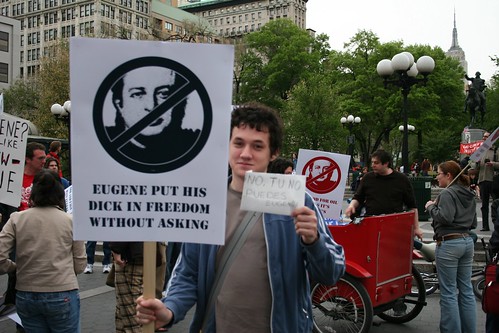 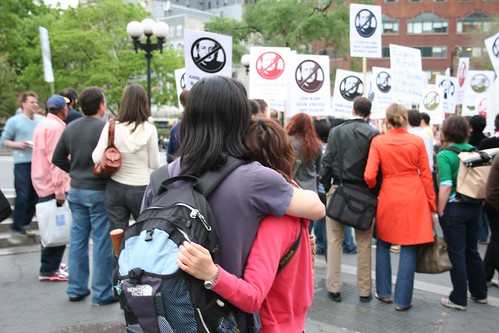 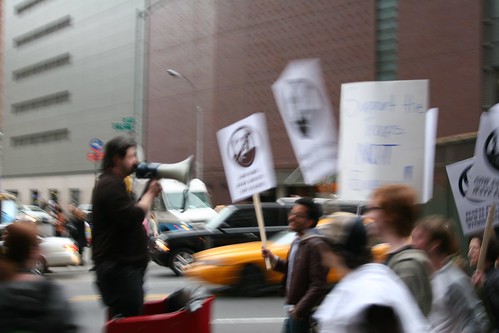 Tonight was the Eugene Mirman protest, put together by [Eugene Mirman](http://www.eugenemirman.com). While the actual handing-out of signs didn’t start until maybe 3 minutes before the event was supposed to start, it was quite comical and silly and confusing to those not in on it.

Talk about your Must See TV!

If this didn’t load properly, here’s a direct link.

(For those who didn’t understand this: [Eugene Mirman](http://www.eugenemirman.com/) is a terribly funny stand-up comedian – one of my absolute favorites in the city. He, for some reason, is in this clip as the suspected arsonist.)

So, tonight was the first of two nights of taping for the next CD from the very funny Eugene Mirman. Here’s the notable bits:

Leo Allen opened with about 15 minutes of material, including a good bit about trying not to eat babies, even when they’re smothered in delicious baby sauce.

Eugene ran through a lot of his recent bits – the Edinburough hand-washing, the Planned Parenthood, a few others – as well as plenty I hadn’t heard before, which is always a bonus. Seeing the same comedians a lot in NYC can lead to recycling of material, so getting fresh material during tapings is always good – my laughs are a little more spontaneous, anyhow.

The thing I’ve grown to really enjoy about Eugene is his ability to stay aware of what’s going on. He chuckles as he goes, obviously enjoying himself. He’s aware when jokes aren’t working, and is able to cut himself off and playfully note that he’ll “fix THAT one for tomorrow night” or taunt “for those of you listening on the CD, you won’t hear this, as I’m cutting it out”. When technical difficulties abound, he can bounce back with some grace.

And boy, did he have to bounce back tonight – when he started one of his closing bits, which involved audio being played from the soundboard, he first managed to get the microphone stand wedged, unable to move with even the mightiest of forces. Then, while the bit was playing, it mysteriously crapped out, with the audio equipment breaking horribly. The solution? To have someone run downstairs and grab his bag from the coat room, bring up his iPod, and play the bit from there, which he had loaded on “just in case”. It ended up being smart thinking, and even with a low battery charge, he was able to get through the bit the second time.

It was a very good time, and hopefully the jokes that fizzled (and there were, sadly, a fair number) will be repaired tomorrow night for a nice full CD of material. Also making things enjoyable was the never-resting Kathryn Yu, who I do not actually disapprove of.

Eugene’s previous CD is, inexplicably, available twice from the iTunes Music Store, and highly recommended. The new CD will be available on SubPop sometime in the near future.